What Would Audrey Do?

Well not get told off by her Mother for mismatching her outfit I'm sure! (more of that later)

I had the whole of last week off work, what bliss. and for once I had lots of fun plans rather than just slothing round the house.
On Wednesday I went to The National Portrait Gallery with my friend Charlotte to see their exhibition on Audrey Hepburn. 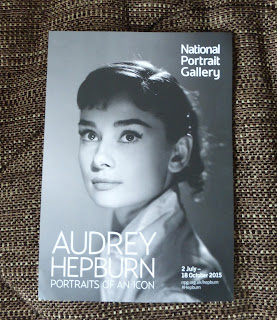 First we went for a wander around Covent Garden, I haven't been there for ages so it was fun to poke about. I was very tempted by some of the jewellery on the craft stalls but in the end I only bought myself this picture as an early birthday present. 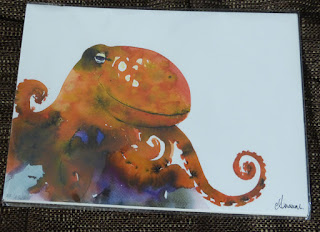 I was very taken with this smiley octopus so I decided to buy him, Himself however is not at all keen, oh well.

Stomachs started growling so we decided to give Five Guys a go and how glad am I that we did. This was everything Mucky D's and BK's wishes they were and more.
I went for a cheese dog and fries, and thinking of the portion sizes in other burger places I asked for regular fries. The girl serving helpfully pointed out this was actually meant for 2 people, recommending I go for a small. Turns out that even the small was a mammoth portion.

As anyone who knows me well will confirm I am not a woman to ever leave a chip uneaten, but even I had to admit defeat on these deliciously gorgeous fries.
No 'reformed from mashed potato' here, only freshly cut, skin on, double fried in peanut oil, real potato! MmmmMmm.

We waddled out of Five Guys and headed through Leicester Square. There was a big crowd gathered so we went to see what the fuss was about. 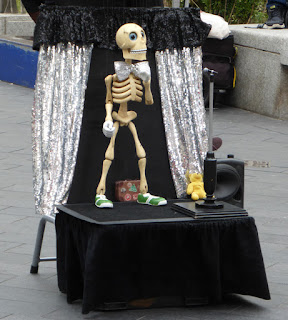 turns out it was all for a Frank Sinatra dancing skeleton in a natty silver bow tie and green sneakers. 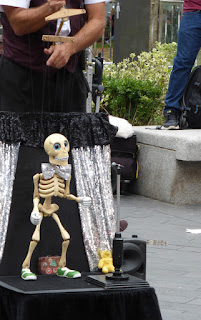 Ok so he was puppet, but goodness me that puppeteer was good!
He had clearly watched Frank Sinatra do his Vegas shows many times, that puppet was not just word perfect but move perfect too.
Admittedly that was probably lost on most of the teenage tourists in the crowd but as someone who HAS watched those shows, every gesture and every movement was captured to a tee. Very clever and unusual street entertainment for sure.

We reached the National Portrait Gallery a bit early (the exhibition tickets are timed) so we mooched round the exhibition of the 'Portrait Artist of the Year' finalists. No photography sadly but wow, just wow.
All I can say is they were all well worthy of their place in the final.

And so to Audrey.

Again no photography so we both had to satisfy ourselves with buying postcards afterwards. 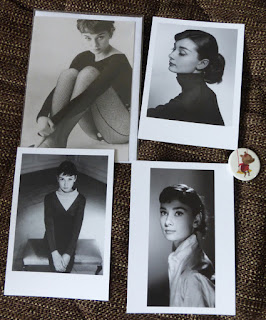 It is was a small but perfectly formed exhibition mostly made up of unseen pictures owned by her family. You were struck over and over again by just how photogenic she was, and for me, not just the overall luminous quality she had but by her stunning eyes, truly windows to a beautiful soul.
One critic was quoted as being distracted and captivated by the amazing eyes of one of the impish girls in the chorus, so much so it took his attention away from the main players, she was an unknown in an early background stage role at the time, there was no doubt she would go on to be a star.

Personally I find something very calming and joyously uplifting about gazing raptly upon great beauty, be it male, female or in nature, and this exhibition was just a joy to behold.

Friday was my birthday and the day began earlier than I had hoped because our front door lock had broken the night before, I had visions of my Mother (who was due over) having to feed me cake through the letterbox!
Anyway this meant getting up to call the rental agency as soon as they opened for the day. As it turned out the man who could fix it was just around the corner and would come straight over, which in turn meant abandoning my cup of tea to belt upstairs and fling some clothes on just in time before he arrived. Thankfully it was just the barrel and not the whole mortis lock that had broken so once he got a new one it was a matter of moment s and all was fixed.

I had another cup of tea before going upstairs to wash and dress properly for the day ahead, well I say dress properly, clearly even though I'm now the great age I am my Mother still thinks I'm not capable of putting an outfit together!
She arrived and looked me up and down, tutted and said "the worst bit is your necklace it doesn't go with anything else you are wearing"
Me " that's the whole point"
Her with narrowed eyes "Hmmm". We went to leave and I put on my silver brogues,
Mum "Good lord no you are not planning on going out in those shoes? No, no, no they do not go at all"
Me "Fine I'll take them off"
Mum "What do you have instead?"
Me "Green converse? I have green in my outfit"
Her horrified "No! even worse!"
*Sigh*
I ended up in sensible black just to keep the peace. Outift sorted to a passable level we went into town to buy some goodies for lunch which we took round to the nursing home and ate with Dad. From there we went to my brother's house to get our hair done and finally home to prosecco and presents. 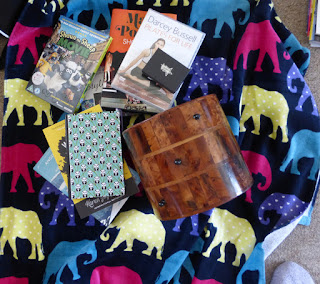 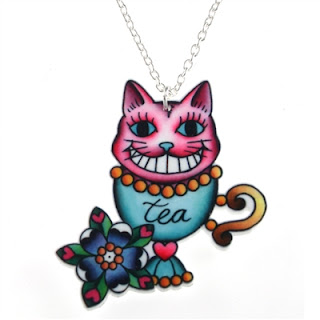 The necklace was a massive unsubtle hint from me to Himself heh heh it worked.

Saturday I was up and off to Oxford with my friend Simon to see Noel Coward's Blithe Spirit.
It was held in a wee tent in University Parks and was great fun. Performed by a small repertory company from London what the young cast lacked in polish they made up for with enthusiasm in spades.

So all in all a fun week. 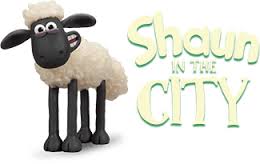 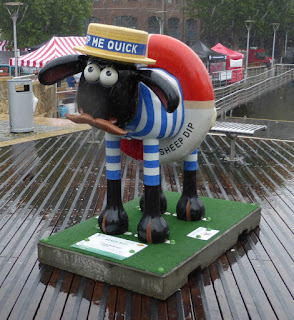 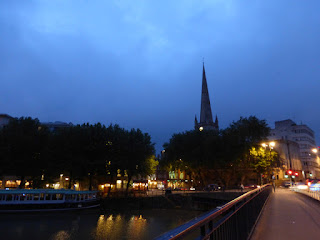 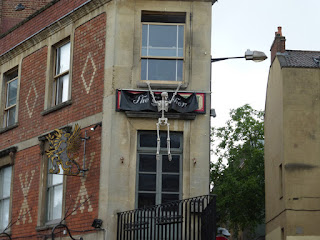 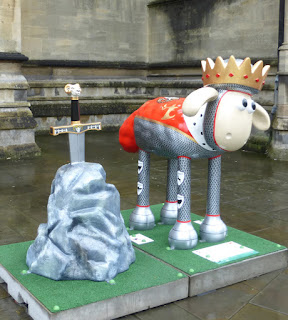 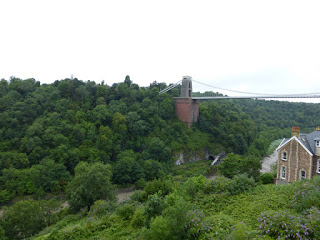 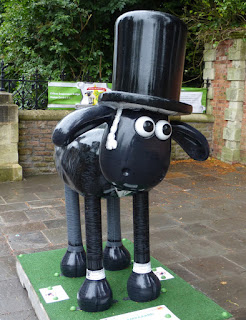