So I did have a couple of blog posts lined up, genuinely, but then we had some sad news. Somehow it no longer felt right to blog about handbag purchases and the like, nor did I feel inclined if I'm honest.
Two weeks ago Himself's Father died suddenly and unexpectedly at home, it would seem he had a heart attack after getting up that morning, but we are still waiting to hear the final conclusion of the coroner's office. Due to the current covid times it takes a lot longer than before to get these things done.
Himself rushed straight down to Kent but I was unable to take time away from work until the Wednesday. He quickly realised there wasn't much that could be done other than securing the house and gathering up a big bag of any paperwork that looked like it might be important so I didn't travel after all (no bad thing considering we don't have a car and have to travel by train in and out of London!)
We spent the rest of the week sorting through the paperwork and making lists of what needs to be done and who needs to be contacted. We hope the funeral will be on the 12th but we have already had to cancel and rearrange it once, so things are in limbo. we have done all we can for now, and well, once the initial shock has passed, you just take a breath and get on with things.
It had been my birthday the Friday before and I had had a lovely day. I have made it my policy not to work on my birthday since I turned 40 ans this year was no exception. So after Himself went to work I had a lovely lie in then made myself some tea and took it back to bed to open my cards and read for a while. Usually I would have met friends or my Mum and had a day out, instead I beasted in the garden for about 5 hours. I did more garden archaeology. I did take a before picture this time as you can see it was a bit overgrown. 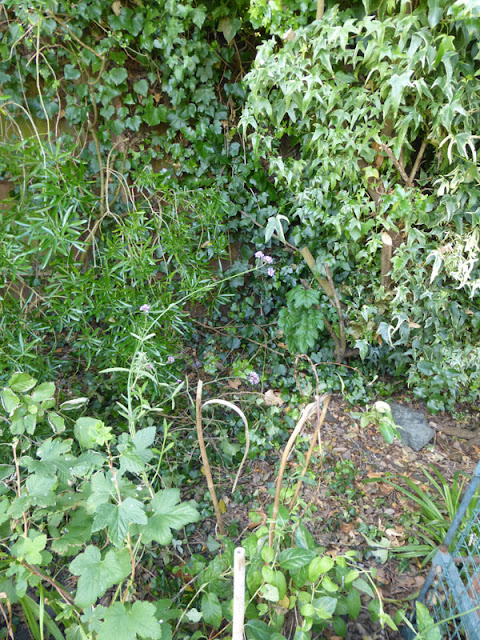 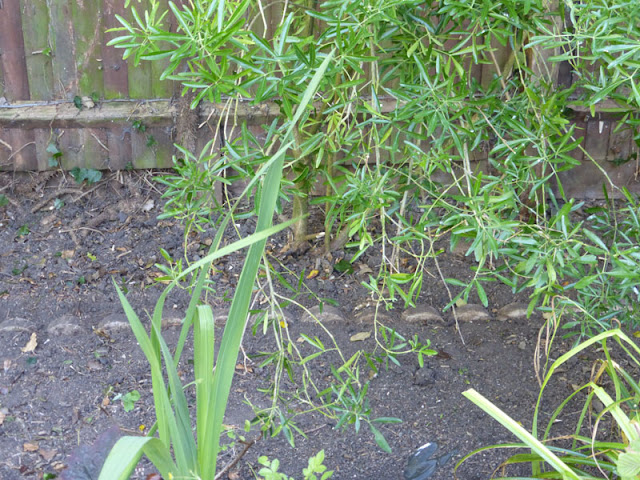 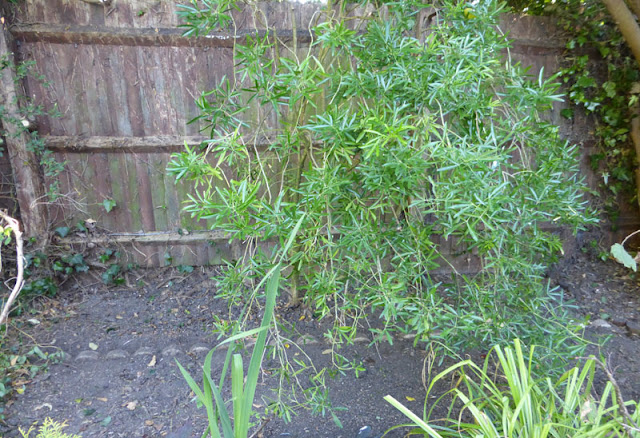 I also found two old hanging basket brackets on the fence and an old nesting box, which feel straight off the fence when the ivy was gone so I wedged it behind the tree trunk. 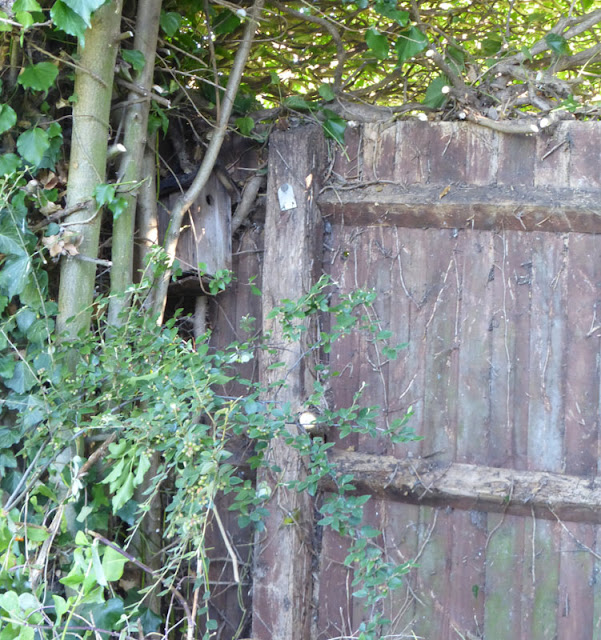 I uncovered this pottery planter with a dead tree in it. I quickly cleaned it, and planted it up! 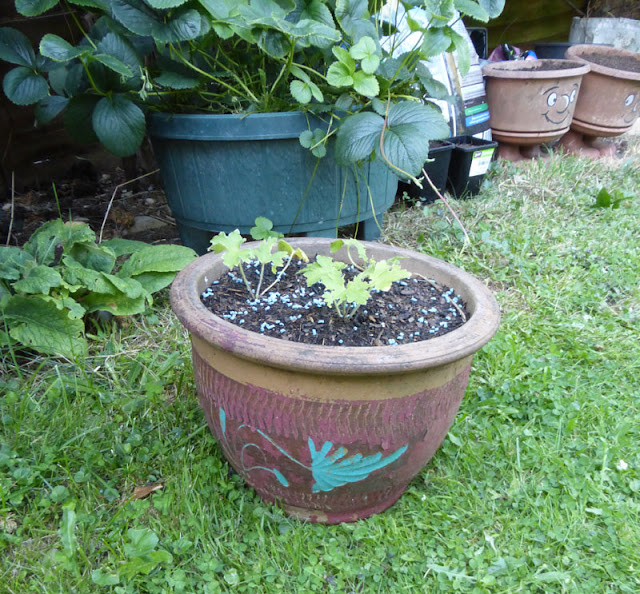 I had cleared two thirds of the area by the time I stopped, partly because Himself came home and insisted I stop working and chill for the rest of my birthday, but partly because I knew there were birds nesting in the ivy which I didn't want to disturb.
I had a shower and chilled with a book on a lounger in the garden with Himself keeping me well supplied with spiced rum and coke! 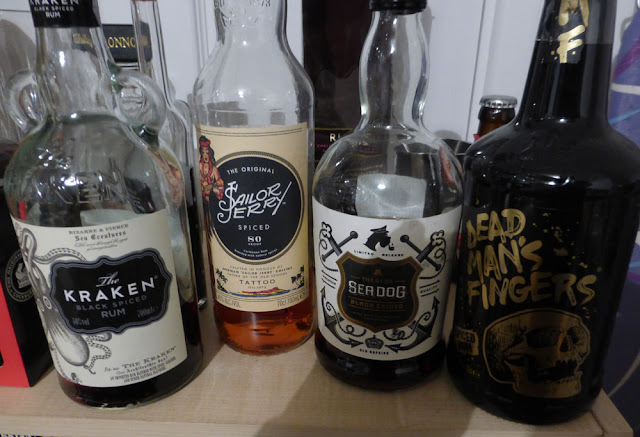 Decisions decisions... I also got another 3 bottles for my birthday. Nephew Number One is a huge spiced rum fan too and we often discuss different/new varieties, he bought me a bottle I haven't tried before (not pictured). My favourite is Dead Man's Fingers and they have started doing many different flavours so I spent some birthday money on a bottle of Lime and a bottle of Raspberry. They came with a free tiny bottle of hand sanitizer and a branded face mask, what a sign of the times.
I managed to get another compost delivery, so on the Saturday I re-potted some of my plants (when you rent, your garden lives in pots so you can take it with you!) I also decided to tackle the covered side passage which has had a few boxes in it since we moved here. Of course they were there because we were going to sort out the contents and of course we never did!
However we have discovered to our horror we seem to have a colony of false widow spiders in the passageway so we decided the time had come to clear it completely so they have nowhere left to nest.
Yes, yes I know spiders are wonderful things and do great things, but I hate them and ones that can give you a nasty bite have absolutely NO place in my home.
Anyway I come to agree with the train of thought that, space allowing, you should leave things for a while before sorting through them. After 3 years, apart from a few random tools and a big padlock everything else went straight in the bin!
I did rescue my wellington boots which I had left in the passage since we last had snow. They got quarantined and thoroughly hoovered out before I stuck a foot in them again.
When we did our weekly shop I spotted a pretty petunia in Sainsburys. It only had one or two faded flowers on it but I kept thinking about it, so I nipped back and bought it for myself as an early birthday present. 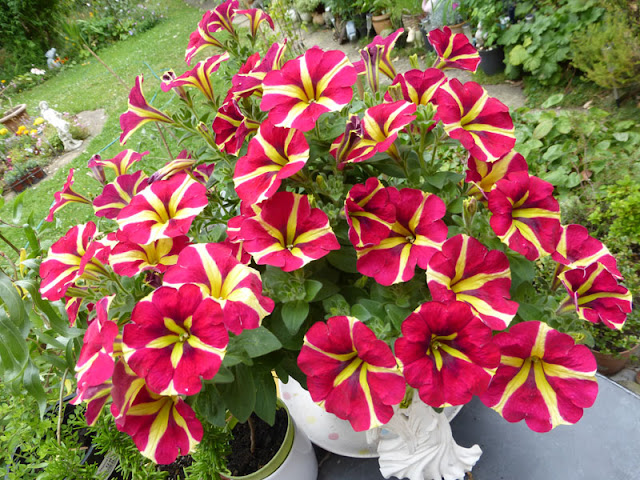 After a couple of weeks it has just gone mad and I have loved looking out of the kitchen window and watched more and more blooms appear.
The garden really has been a sanctuary throughout lockdown and certainly in the last couple of weeks.
My vegetable 'patch' is going great guns. 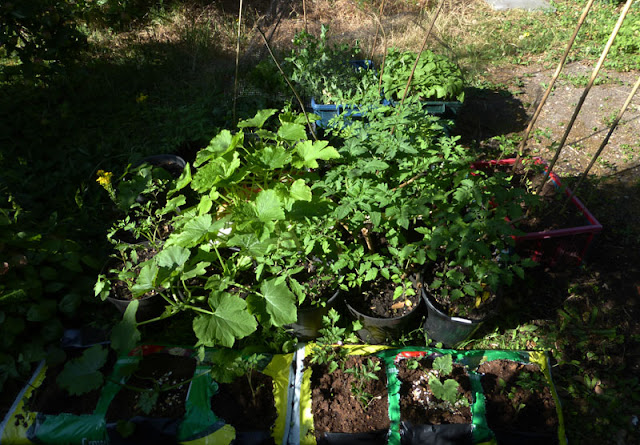 From this to this 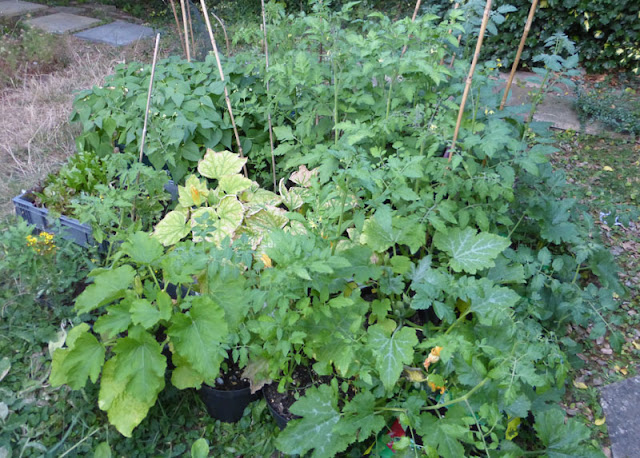 We have had salad leaves and peas, as well as some ball shaped courgettes. 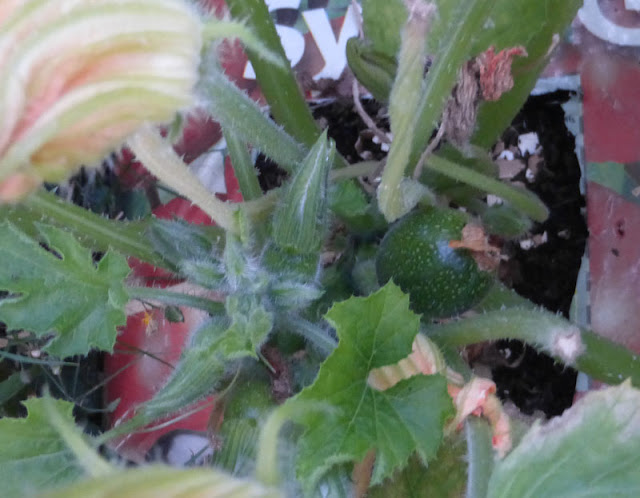 I had completely forgotten that I had bought these unusual courgette seeds until my Mum rang me up and was asking why her courgettes were growing ball shaped! They were some of my left over seeds from the old house. I also found some anemone corms when I was sorting through the seeds. I have no idea how old they were but planted them anyway and to my delight they they have been just gorgeous.
When I ordered compost during lockdown there was the option to have 5 trays of assorted annuals for £17 and as I had gaps I took a punt. 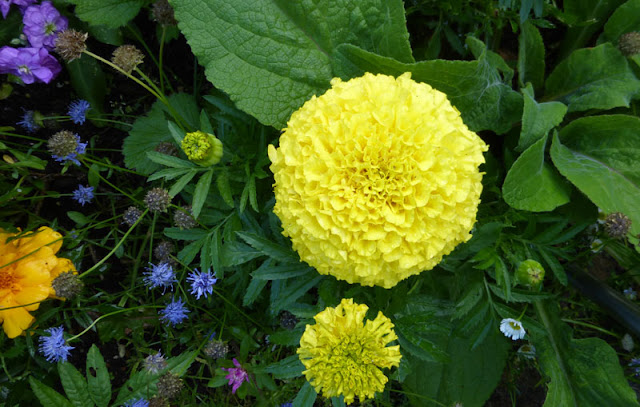 I'm not a huge fan of  your average bedding plants but I have to say these tagetes have put on quite a show, the blooms are just ridiculously enormous.
There is a little cat who likes to prowl the garden and generally be a nuisance. I also have a pair of very stupid pigeons who do keep nesting in wide open places and having their nests robbed by the local magpie. Well they had built another such a nest and I noticed it when I was clearing the garden. Whilst I was out pottering about I glanced up to see if it was still there, did a double take and then went and grabbed my camera. 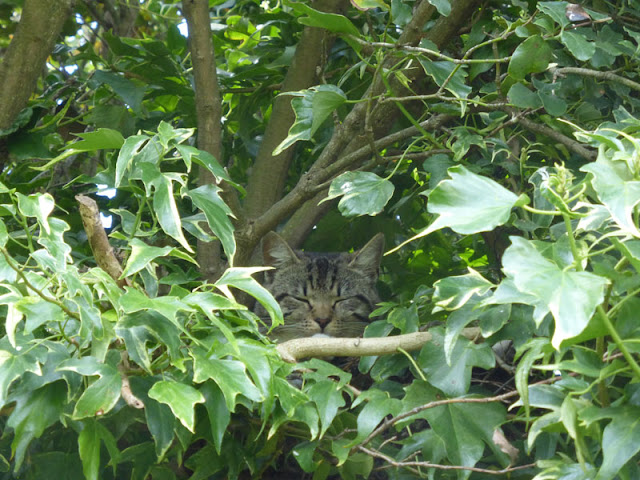 Not a pigeon but a cat in a nest.
Talking of cats. I went to visit my Mum with my brother and sister in law a few weeks back once the 1 metre distancing came in. I sat in the back of the car with a mask on. We had a lovely day sitting out in her garden, but best of all I got to have a play and make a big fuss of Bobby the cat who I haven't seen for months. 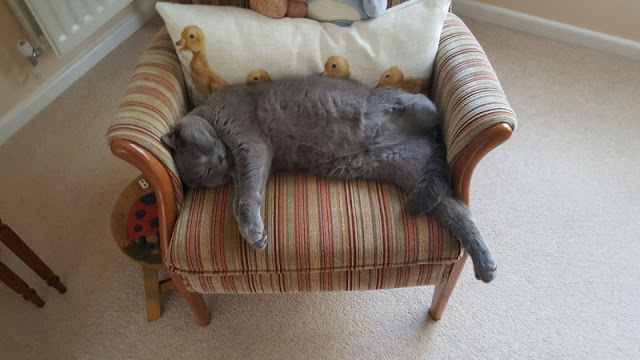 Mum sent this picture afterwards clearly I wore him out.
It was Mum's 80th last Saturday. We had to change our plans due to lockdown and instead of a family trip to Cornwall we bought her a new i-pad and had afternoon tea at my brother's house. Of course it poured with rain so we ended up having to distance in the kitchen, thankfully it's a big room. We did manage to arrange a visit with Dad first and I nipped down the day before to leave a present and card for him to give her. We all had to be gowned and masked but at least they agreed to let us see him.
I'll end with some handbags. First when I was rearranging my bags I discovered one had been chewed by a woolly bear. 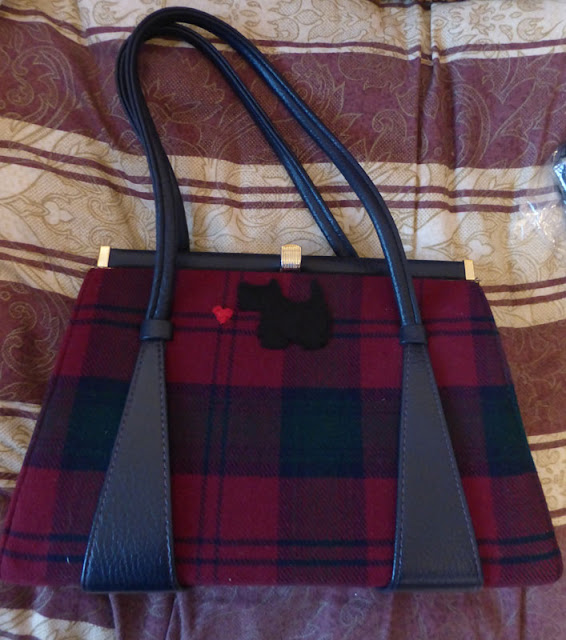 Once I got over being annoyed I decided to cover the holes. I cut out a scottie dog and stitched it on.
So you know I said I wasn't going to buy any more handbags? Well that lasted as long as it took me to bid on and win this job lot... 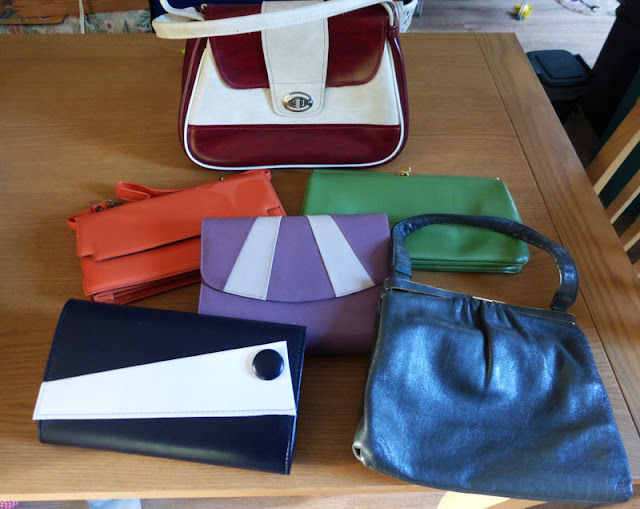 The bottom right was a separate purchase 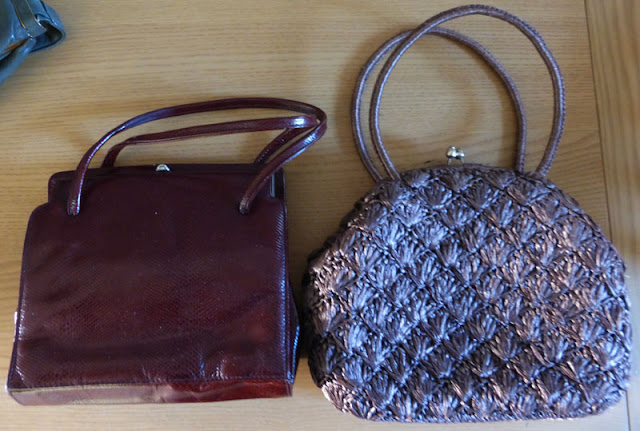 As were these two.
Oh dear so much for no more bags.
I also bought a new bedding set 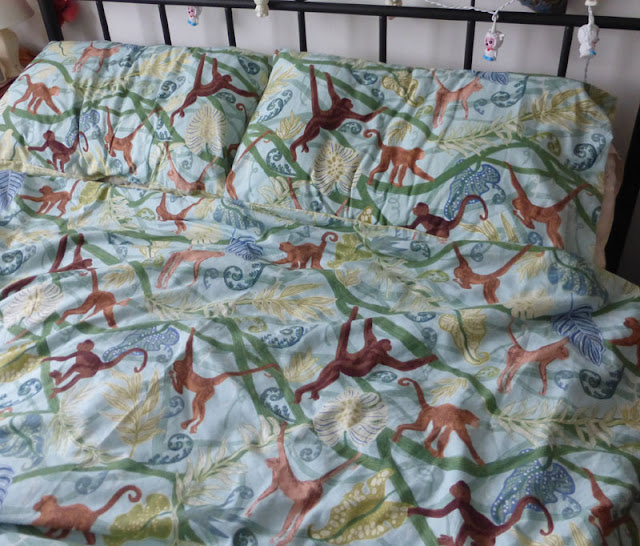 I could not resist the monkeys.
Not sure when I'll be back. We have some busy and difficult weeks to come
Posted by Miss Magpie at 13:25 4 comments: