You may recall back in October Himself and I headed to London to 'Walk Haunted London' well this weekend we were back but this time armed with a book that shares it's title with this post.

I've had the book a few years now and we have done a couple of the other walks out of it, but this time we decided to go for the one that went from Regent's Park to Camden via Primrose Hill because we had both only ever been to one of the 3 (Camden) and even there never together.

I should be honest here and say the trip to London was actually to check out the new Lego store at Piccadilly Circus which I was intrigued to see after watching the show all about it's opening that was on at Christmas. Himself was not so keen but as it was a gorgeous day I convinced him we could swing by there, build a quick figure or two and then go for a lovely walk. It was fun to see the store with it's huge Lego Big Ben and other London landmarks but I don't think I'll hurry back.

Our walk started at Holy Trinity Church Marylebone  - birthplace of the Penguin paperback. 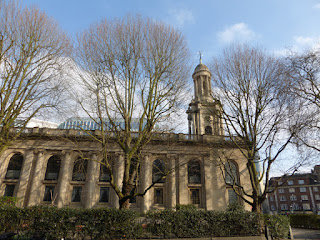 They started out in the crypt and had to be silent when services were taking place, according to the guide book staff were given a penny a day to use the toilets at the tube station over the road!

From here we headed to the gorgeous Regent's Park. I just had to take an arty shot of this amazing Art Deco hotel. 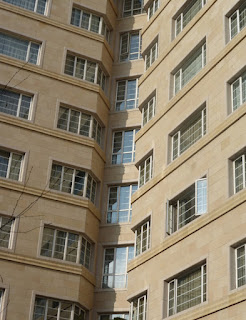 I can't believe I've never been to Regent's Park before it's gorgeous! Mind you there is so much of London I still need to discover. 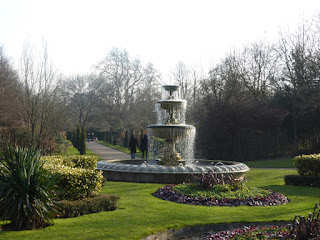 In this day and age of computers and playstations it was lovely to see so many families out enjoying the sun.
Did you know Regent's Park has London Zoo in the middle of it? I didn't.

We didn't go in, but it was fun being able to see into some of the enclosures. 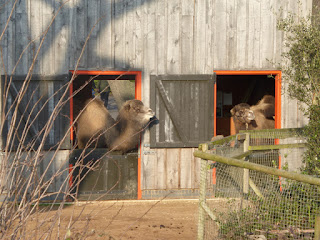 Look who followed us all through the park. Very apt! 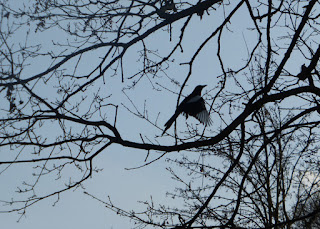 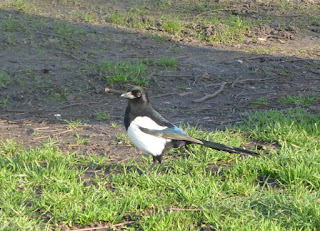 We circled the zoo and crossed the canal and road to head up Primrose Hill. 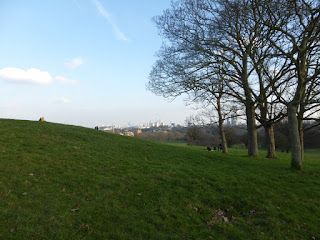 It seemed every tourist in London was up the hill taking shots of the London skyline so we grabbed a few shots and carried on with our walk.
We got hopelessly lost, retraced our way back and started again. This time we got it right and followed the walk past various once homes of various literary greats like Kingsley & Martin  Amis. Yeats, Keats and Sylvia Plath. 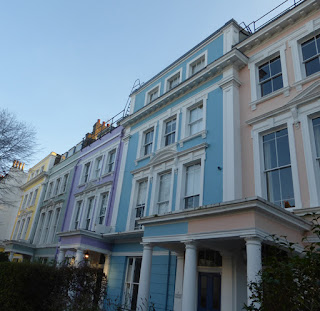 Finishing with a little dogleg that took in Alan Bennett's house at the time of The Lady in the Van. The guide was very good at not telling you the exact house, at the time it was written he still lived there. So whilst Himself resorted to Google I wandered down the street and fell in love with this lovely house, so very different to all it's neighbours. I just had to take a picture. 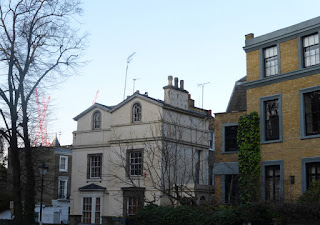 Turns out it was the house we were looking for, It pleased me a lot to know I chose the same house as Alan Bennett. I love Alan Bennett.

Now it is no secret that I like to drink tea, a lot. By this time it was about 4 in the afternoon and I had had one cup all day. Even I will admit I was on the very cranky side of cranky so the need for the cup that restores was getting urgent.
First cafe we saw was an old pet shop converted into a terribly chi-chi cafe. 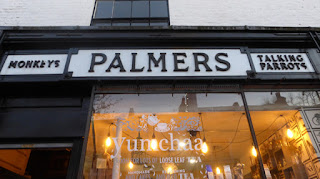 This being Camden it cost just shy of 3 quid, (3 quid people!?!) for a cup of tea, not even a mug, but a cup. By the time Himself had had 2 sips of coffee I had inhaled my tea and was desperate for another but not at that price. This also being London I got the most ridiculously dramatic over reaction when I politely asked a guy if he could move his chair in so I could get to my seat. I just laughed. I wasn't about to let some silly pretentious prat spoil a lovely day out.

So what else? Busy, busy busy, work has been crazy. Himself and I had our annual cinema trip for Valentine's Day. As ever I chose the film and tested his love for me by making him go to the 30th anniversary screening of Dirty Dancing, a film he has never seen and I have seen more times than I can remember. I wasn't about to miss the chance to see it on the big screen again. 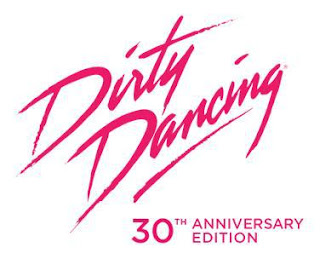 It has to be said the 30 years have not been kind. I hadn't realised just how dreadful the dialogue is but, oh well, the soundtrack is still outstanding and lets face it is is really about the dancing isn't it?

This week I also went to see Hidden Figures. 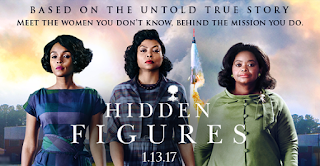 I loved it. What a fantastic film, though it does make you kind of sit back and think what you've done with your life. If you haven't seen it I highly recommend it.

I've been out to dinner with friends, nothing fancy, just mac and cheese with lots of wine and good conversation. Fun Times. 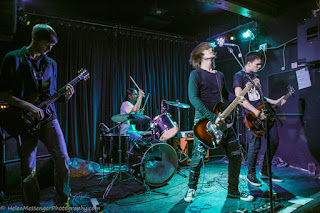 They were pretty good considering it's only their second gig, sadly the venue was pretty terrible and the line-up an eclectic mix to put in mildly. A young lad who clearly thought it was the 80's and he was auditioning for Kraftwerk, followed by a very earnest folk band and then the Nephew's Grunge Metal band!?!
Yup, still can't figure out what the promoter was aiming for there but the Nephew's band wisely decided to look on it as more practice.
Himself and I propped up the bar and shook our heads over the youth of today and the fact they couldn't even last in a mosh pit for more than one song, no stamina, not like in our day.

And for those of you with no interest in Metal and mosh pits here's the lovely latest addition to my collection...... 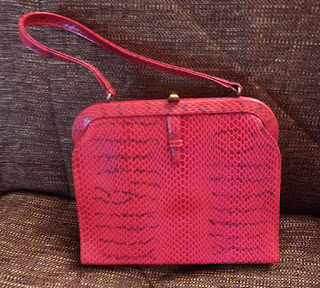 I'm going through a bit of a red handbag phase.
Posted by Miss Magpie at 13:46 8 comments:

So today I forced a grumbling Himself to get up early and go to Reading. I had a ticket for a vintage kilo sale at The Hexagon.
My friend Charlotte, who lives in Reading, mentioned in passing at work on Thursday that it was happening. Cue much frustrating internet searching by me to actually find out when it was on, lets just say it wasn't well advertised!
At first all I could find was one at Reading University on the 25th Feb, so I figured Charlotte had got the wrong date, but she was adamant she had walked past an advert saying this Saturday so we looked again and *finally* found a link.
The fair was due to start at 11am, entry £1.50, but you could buy an early bird ticket to get in at 10am for an extra £1.50 so I thought what the hell and did. The premise being you get given a bag which you go round and fill then hand it in to be weighed and you pay by weight, with it costing £15 a kilo.

I must admit I still wasn't sure whether I really wanted to go or not right up to last night, I couldn't decide whether £15 a kilo was kind of expensive and was dubious about the quality of stock as I have heard mixed things about kilo sales in the past, but in the end I decided to pop my weigh and pay cherry.

As I've been a pretty crap blogger of late I forgot my camera........again!

There were a fair few people queued up outside by 9.55am but judging by the photos on the facebook page many more arrived later. They apparently open new bundles every hour, I've no idea what a bundle consists of but again judging by pictures it seems to cause a bit of a frenzy!

I was expecting a glorified jumble sale, but everything was hung up on rails and sorted into garment types, it was all incredibly crumpled so clearly had just come out of some big old bundle and hung up. I'm glad I went early because it wasn't huge and I know it would have pissed me off to fight to get near anything once it got super busy.  In terms of content, as anticipated the bulk was 80s & 90s and various teeny teeny tiny size items from other eras.

So did I come away with any bargains? Well actually yes I did 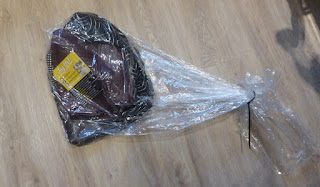 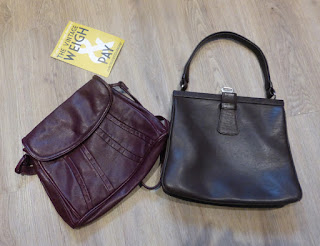 The brown one has seen a bit of life but still has plenty left, and the burgundy one is in perfect condition. 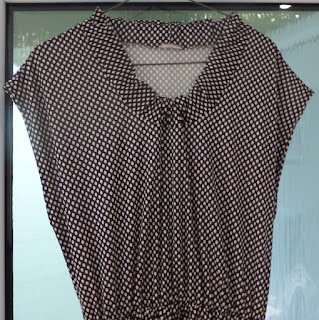 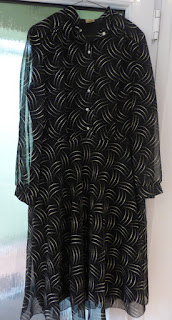 So would I do one of these sales again? well yes, I think I would, but definitely on the early bird entry.

I should clarify Himself went off into town as wild horses wouldn't drag him near a vintage sale! I met him later and we did a bit of shopping and had a late breakfast in Five Guys, delicious as it was, I conclude burger and chips does not make a good breakfast, I was left feeling nauseous for quite a while afterwards, I'm not used to eating greasy food these days.

I snagged a few tale end of the sales bargains. 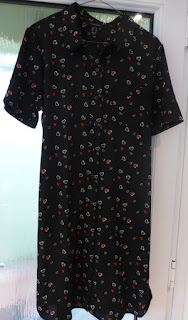 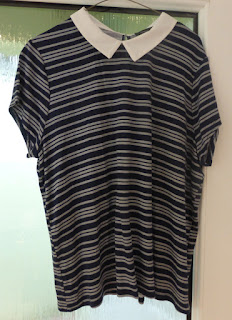 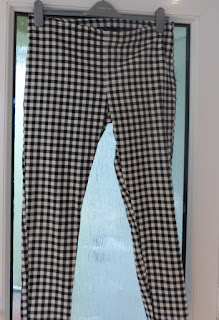 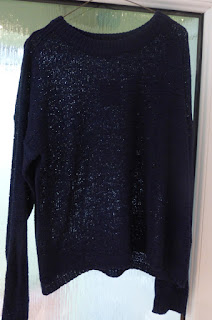 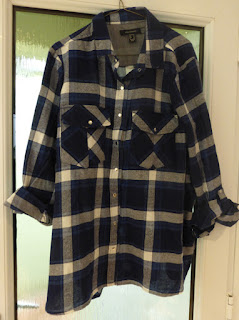 and a dress I fell in love with in New Look. 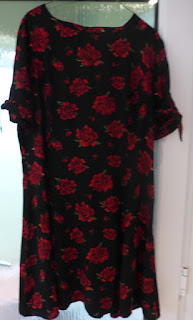 It was nice to get out and about today. I have been full of cold *again* and feeling very sorry for myself the last week or so. Other than heading out to the cinema to see the Lego Batman Movie (which was very funny) I've been flopping around pathetically at home.

Talking of Lego I did finally get round to building the false Lego pirate ship Santa brought. Of course Himself has to add embellishments, so I came down the next morning to 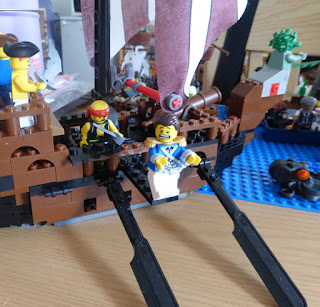 a Medusa figurehead and a poor chap being made to walk the plank!

I shall finish up with my delicious new Luxulite brooch. I cannot begin to tell you how much I love it. It was a custom order from the super talented and really rather lovely Katy. 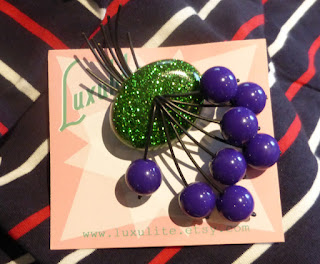 She had made a similar one with purple beads but with a yellowy green back.
I dithered and dithered over it because I wasn't sure about the colour of the back and when I finally decided it had sold.
So on the off chance I emailed Katy and asked her if she could make another one but with a darker green back and she said she could. I suddenly had to decide things like plain green or glitter?, shape, size etc. As you can see the Magpie in me went glitter. I am absolutely thrilled with the end result.
Posted by Miss Magpie at 10:03 9 comments: