Hello , hello I’m trying to keep it to at least a monthly round up, better late than never eh?

As it goes I didn’t get up to too much in August so this will be a very brief round up in terms of words but a bit bumper in terms of pics because I did promise to share some of my more recent purchases.

I started the month meeting some friends for lunch. We were meeting at Liz’s house and as she is a very keen gardener (with the most stunning garden that I covert desperately), I decided to buy her a couple of plants instead of chocolates or some such. It was another super hot day that day, so I headed out in the morning to incorporate a bit walk around buying plants. Foolishly I wore the sandals I bought last year at the end of the Clarks sale and had therefore not worn for any length of time in any kind of heat. I'll save you the gory details, let’s just say by the time I got home, even with the addition of a plaster, one foot had been rubbed so badly it took many weeks to heal. This scuppered any further sandal wearing plans for this year.

Anyway we had a fabulous afternoon, lounging in the shade of one of the apple trees in Liz's garden, eating and drinking far too much. Bliss.

I also dragged Himself out for a walk to watch the August moon come up as it was the last super moon of the year. It was a gorgeous evening and we had an amazing view from the old railway line to Upton. 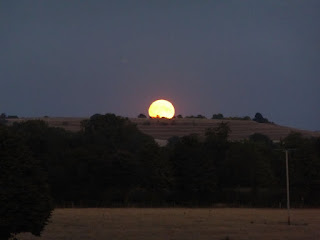 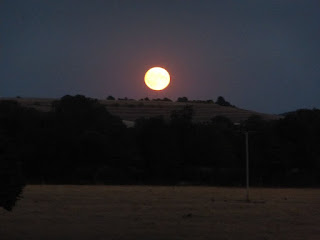 Sadly my little camera was not up to the task of taking the kind of pictures that did the view justice, as  not only is it old and well used, it has never been good for night time pictures. I tried anyway though.

This was followed by another outing with Soo and our mutual friend Simon. Since Soo retired we three try to get together every 4-6 weeks for a catch up which usually involves eating and much drinking (we are unashamedly a bad influence on each other when it comes to the question of buying another round!) This time it was Simon’s choice of venue and he picked The Medley Bar at Port Meadow in Oxford. It started as a pop up bar on the banks of the Thames a couple of years ago and proved to be so popular they ended up making larger and semi-permanent. 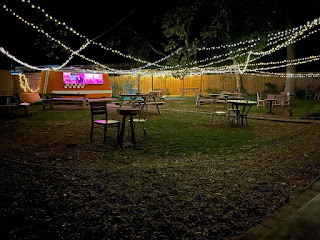 Of course the day we had chosen to meet was another where the temperatures were due to hit a ridiculous 37 degrees, so we met in the morning to walk there before it got too hot. We arrived and found a free table under a huge tree right on the edge of the river, so we took up residence there for the next 5 hours. 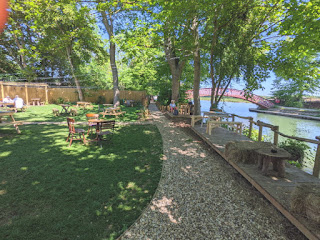 Because we are all grown adults, we did intersperse the alcohol with water and one of the delicious hand-made pizzas they cook on site. It was steadily busy with dog walkers, cyclists, runners, kayakers and wild water swimmers. I also loved the fact they were happy for the youngsters busy enjoying the summer holidays messing about in the river to come and use the toilets or get drinks of water.

I wore one of my birthday dresses. I was ordering some new undies on the M&S website when this dress caught my eye so I ordered it on impulse. I absolutely love it and it’s been blissful in the hot weather as it’s cool and floaty.

I have worn it loads and even had a catastrophe when I got it tangled in the wheel of one of the office chairs at work and managed to rip a hole. I was gutted. Thankfully some careful mending with a matching coloured piece of plain cotton fabric and wonderweb means it has seen plenty of action since.

We went to the cinema once to see the second Fisherman’s Friends film. 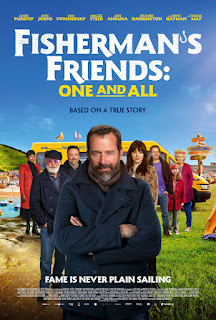 As a film it has suffered from lockdown, as they started filming before and then had to try and do bits during and after so it’s quite disjointed. Having said that it’s still an uplifting feel good film and as ever Cornwall looks stunning. I tease Himself about how long it took me to get him to go there and he instantly fell in love, or actually, it seems was just going back to his roots. According to his family genealogy his ancestors were Cornish tin miners who headed to the North-East and became coal miners when times got tough in Cornwall.

The end of August saw me going to Mum’s for the bank holiday and our annual trip to the Country Craft Fair at Stonor Park. Thankfully the weather was a little cooler, so we enjoyed sitting outside with a glass of prosecco planning how to rearrange some of the garden and playing with Bobby the cat. We got to Stonor at about 10.30am the next day and had a happy couple of hours browsing. I didn’t buy much; some greetings cards, a printing block, a little whale for my Christmas tree and some earrings. 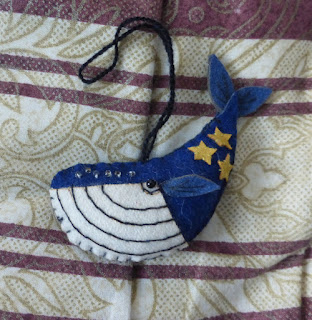 From Stonor we went to my Mum’s local café for lunch. I had a jacket potato with tuna which was insanely huge because the ladies know my Mum and just kept piling on the topping! We then drove to see Dad and I got home in time to spend a few hours with Himself’s sister and family who had called in on their way back to Devon from Legoland. It was lovely to see Nephew Number Two and The Little Miss in the flesh for the first time since lockdown. They have both got so tall! 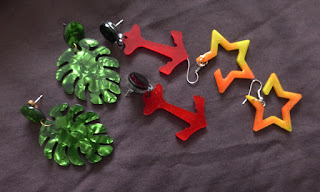 The star earrings are the ones I bought at Stonor, the anchors and palm leaves came from the Collectif summer sale. I also treated myself to a couple of handbags 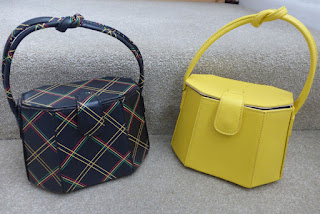 and a strawberry print dress.
Last post I mentioned handbags didn't I. 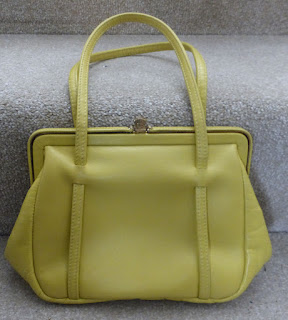 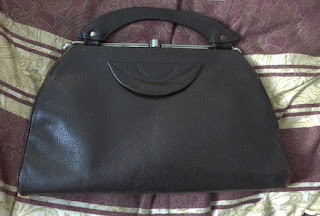 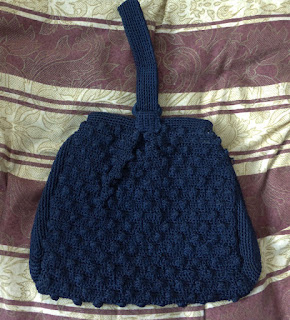 These  are all vintage purchases but I also bought this in the Accessorize sale because it reminded me of my favourite skirt from  the 80's! 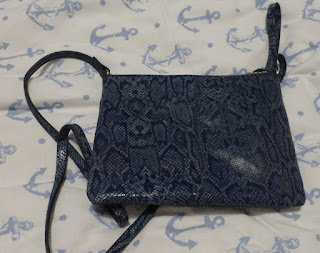 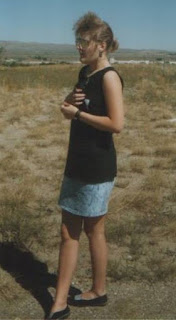 Not the best pic, but I think the only one I have of me wearing it. 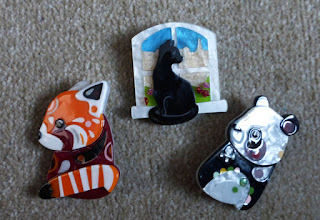 A few Erstwilder sale purchases...
Finally I had to return something to Marks and whilst there I spotted this bedding and couldn't grab it fast enough, I may even have squealed... 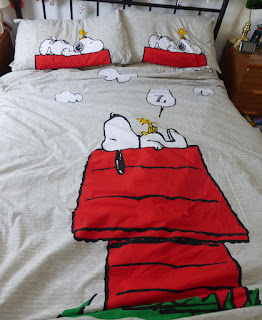 So that’s August and a few of my recent purchases.

Soon to follow our annual trip to Bournemouth and the thrills and spills that occurred there this year, and yes there were spills!