I have been meaning to blog for days now but I just never seem to find the time too much work intruding on my internet time!
This Tuesday I did have the most fantastic day. Firstly they have been celebrating Jane Austen this week in the U.K and because of that fact the Bodleian Library exhibited some of her notebooks and first editions for one day only. I adore Jane Austen with Persuasion being my favourite book so I was there like a shot (perks of the job!) It's hard to describe what it feels like to gaze upon parts of her novels...... written in her own actual handwritting! To imagine her working away on that actual piece of paper creating Mr Darcy or Elisabeth Bennett for the first time. I must say beautiful neat handwritting it is too. I guess you just have to either love books or the author so much to get that buzz, it was just amazing, well for me anyway.
They had a lovely quote from one of her nieces who said she would sit quietly sewing, then suddenly roar with laughter jump up scribble something down in a notebook, then sit down again as if nothing had happened. You can only imagine what she was sitting thinking about as she sewed!

The other lovely thing was the openning of a Cath Kidston store in Oxford. 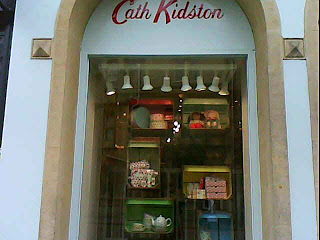 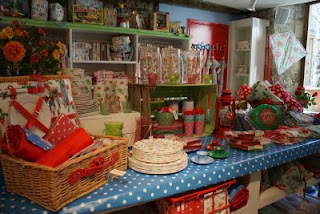 I had a blissful lunch hour browsing round. Now whilst I would never say I am a mad fan to the point of filling my house with her goods. I do love a lot of her vintage style floral designs. 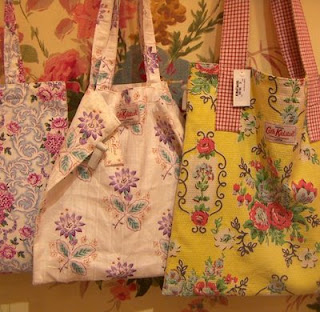 I only wish I could afford them all.
Posted by Miss Magpie at 10:23 5 comments:

A little unexpected shopping, housework and a cupboard of black mould!

So today was going to be all about housework.... Once I'd got a lovely lie-in and the food shop out of the way. That part of my day went to plan, but then my elderly neighbour caught me and asked if one of us could go to Sainsburys for him to exchange something he had bought by mistake. Himself was glued to the laptop catching up on all the stuff he missed when we were away last week, and made lots of grumbling sulky noises when asked, so it was left to me.

As ever I took the opportunity to have a quick look in the local charity shops as I walked into town. Firstly I found 3 red gingham girls dresses, all 3 for just £1.99. They are ideal for some of my sewing projects so I snapped them up. 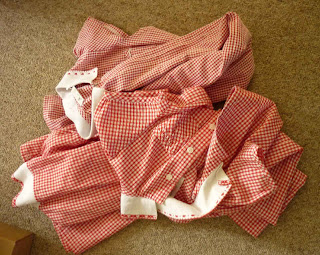 Next I found this fabulous vintage Top Shop skirt. 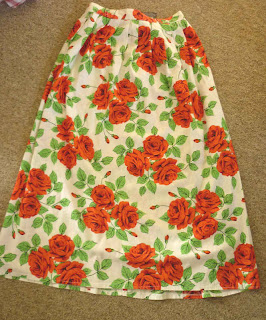 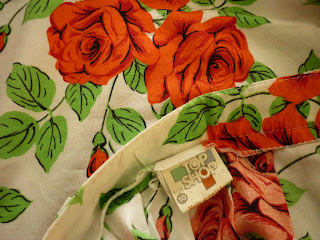 Definitely from the 80's as I recognise the old style label.
Whilst I was a size 10 back then I most certainly aren't one anymore! However I LOVED the fabric so much I bought it anyway. I might make something else out of it or I might sell it in my Etsy shop, not sure yet.
In the same shop I found this fab black bag. In great condition except for a few missing beads at the top which should be easy to fix. 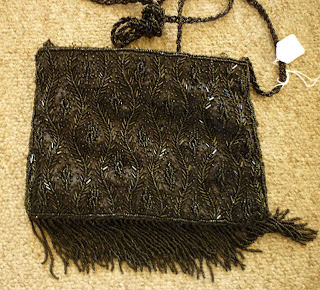 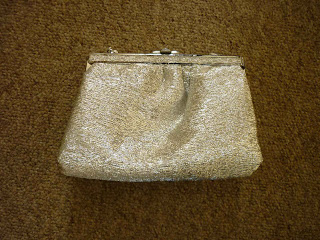 Ok, I will admit to buying ANOTHER headscarf too. So in the end I was very happy I popped into town :-) 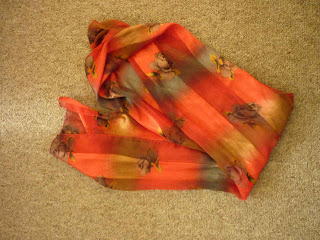 Once I got home I did start on the housey tasks I had set myself. Namely emptying the cupboard that holds all the mugs and glasses to sort through them as we seem to have so many they don't fit in the cupboard anymore! That went so well I did the crockery cupboard too. Finally, as I was on a roll, I decided to tackle the cupboards under the sink. Sort of wish I hadn't now. *SIGH* At one side at the back everything was covered in thick black mould, looks like we have a leak under there somewhere, so it's on to the rental agency on monday. In the mean time I scrubbed everything with bleach and boil washed all my dusters!

Mould and I are friends/enemies of old, ever since we moved into this house infact. It's a 1930's semi with no insulation and dodgy home improvements, which basically cause mould to grow at will. I learnt a very, very hard lesson when I stored all my shoes and handbags in a cupboard against an outside wall only to find many thick with mould and fit only for the bin after just a few months. Now lessons have been learned and I have become a bit of an expert on mould and how to treat it.
For now I've done enough cleaning and plan to spend an evening chilling in front of the T.V.
Posted by Miss Magpie at 11:20 1 comment:

I have been tagged in an online scavenger hunt by Fully Fashioned. I've never done one of these before so here goes!

Tell Everyone Who tagged You: Fully Fashioned.

Any cat owner can relate to this!

A photo of something that will make people say 'awwwww' : 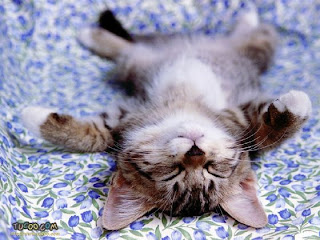 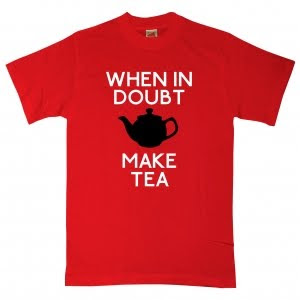 Some but not all of my Snoopy t-shirts!!

An Image From Your Favourite Movie: 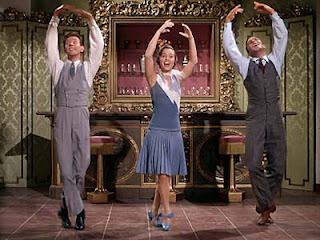 I don't actually have a favourite movie but this is one of my favourites!

A Link to the Newest Blog You've Discovered:

A Picture of Something on your Wishlist: 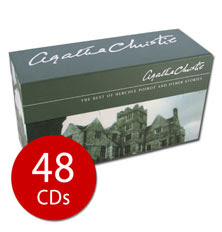 A long weekend of fun with nephews.

I have had a fabulous but tiring few days. On friday Himself and I travelled to Torquay for the christening of nephew number two (Oscar aged 10 months). I was on godmother duty which was a great honour and I dressed accordingly. I had aimed for a smart 1930s/40s look, with a red and black patterned dress, a gorgeous black and white spotted coat and the black shoes pictured in a previous post. I got told I looked like I had 'stepped out of an episode of Miss Marple' so I think I achieved my look. 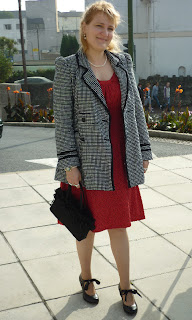 It was somewhat windy so the hair took a battering. Should have worn a hat....
Apart from what has to have been the longest sermon I have ever had to sit through! the christening went like a breeze and the godson was an absolute angel, bless him.

We travelled home on Monday for the birthday of nephew number one, sweet sixteen and no longer my little man as he is as tall as me now!
For his birthday we took him to London yesterday to see the rock band Bowling for Soup play and do a meet and greet with the band.

For those of you who are new to following me. I am, and always will be an unashamed fan of rock music. I have had some, lets call them 'lively debates' with some vintage purists who almost died with horror at the fact that I adore loud music as much as I love vintage clothes. Apparently there are those who think if you love vintage you must immerse yourself in the era to such a degree you are only allowed to listen to the music of that era, therefore my love of rock makes me unworthy of the vintage I might choose to wear.
Well they are entitled to their opinion of course, but forgive me if I choose to take no notice of them whatsoever! Their narrow mindedness means they miss out on a whole bunch of interesting people (like me!) and that is their loss.

Right off the soapbox and back to last night! It was AMAZING! The band were fantastic, Himself had organised a signed birthday card from them to the nephew, which they handed over at the meet and greet. That was the highlight of his night apparently! 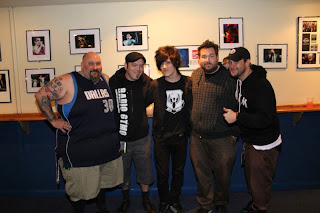 That's him in the middle by the way.

It was a great gig, I sang and danced and got home at 1am.
The best end to a lovely weekend. 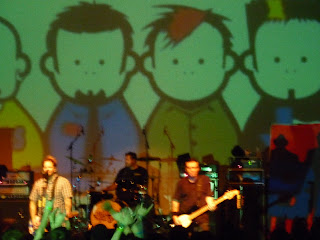 Oh and check out the backdrop in this picture, it was drawn for the band by Himself, my extremely talented other half!
Posted by Miss Magpie at 11:20 4 comments:

And still she shops!

So I have been off work for a week on complete rest because of a bad foot. Now in theory that should have stopped me shopping, however, of course there is the wonder of the interweb! I found myself spending an obscene amount of browsing time on places like Ebay looking up whatever random item popped into my head. I did keep Himself amused sending him links to various hideous things that I came across in my browsing! But I digress.....here are my purchases.

I my opinion a girl can never have too many elephants or too many bags so what better than an elephant bag I asked myself? Look at this little beauty! 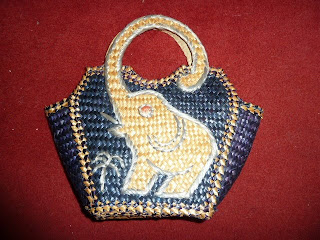 Then I found this one! 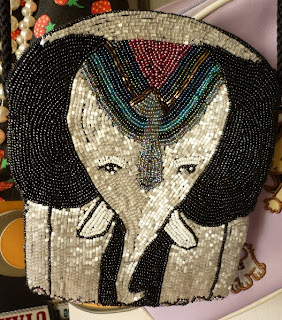 To digress for a moment, I have to point out that in my workplace glamorous outfits are not a wise move. It is very dusty, very dirty and there are too many places to snag your precious vintage. So clothes-wise for work I'm a t-shirt, jeans and converse gal.
I just LOVED this shirt when I saw it. I'm not sure if Mr Whippy is an ice cream brand anywhere else than the U.K., but this is a print of their original 1950's logo. It was also in the sale half price = result! 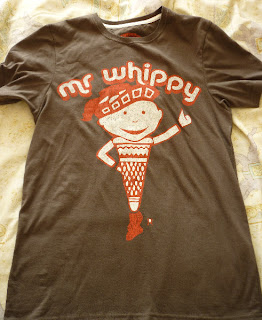 As winter draws on I also got this cute little cardigan. 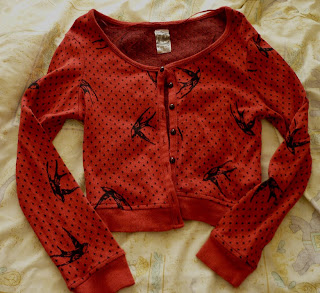 I did put my imposed rest to good use for some of my sewing projects. I prefer to use vintage thread where possible so I was very happy to find this job lot on Ebay for £23. 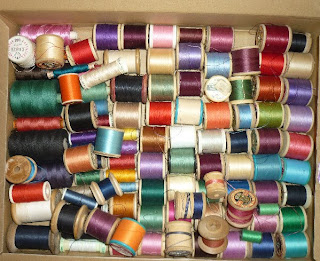 By the end of the week I was going a little stir crazy. I decided to take a slow stroll into town and see how the foot held up. Browsed through the charity shops and found a couple of lovely scarves. 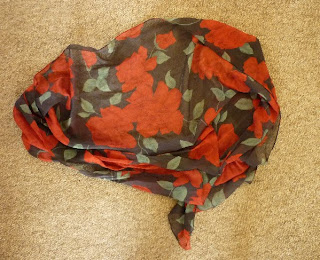 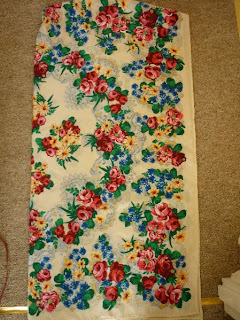 With sewing still on my mind I rooted through the boxes of buttons and other stitching odds and ends one particular shop always has. I found this bag of buckles for 50p and this amazing 'bra repair set'! 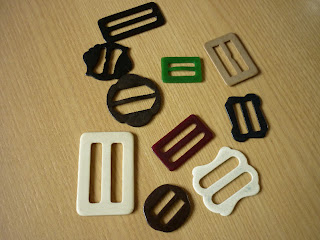 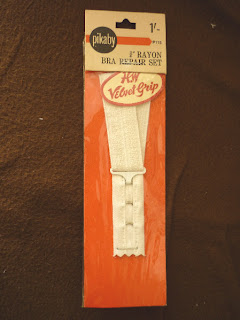