Well here I sit waiting patiently for Kev the plumber to return with a new diaphragm for the toilet. Yes dear readers the toilet has broken AGAIN, but thankfully this time it hasn't flooded the kitchen so I'm very grateful for that at least!

Anyway it seems a perfect opportunity to write a blog post and try not to think about needing to pee.....

So what have I been up too? I've been out for dinner some more (and I wonder why I'm not losing any weight!) to catch up with some friends and also for our anniversary. As he is not a fan of eating out as a rule, I swear an anniversary meal is Himself's excuse to be out on Halloween night meaning he gets to scoff all the sweets that don't get handed out. Of course I jest, and we did have a lovely meal in a little family run Italian restaurant in Oxford. We also managed to buy each other the exact same card which made us laugh, we truly are turning into Howard and Hilda!

I've had a fab day out shopping with Melissa and Soo, the last time we will see Melissa before her wedding in just a month's time. We met in Witney and as I've blogged about there before I will just mention the place we went for lunch. A tiny cafe come restaurant called Church Green Kitchen
I had the brisket (apologies to the vegetarians among you) and it was just sublime. Melissa and Soo both had the bubble and squeak and also gave it a firm thumbs up. I highly recommend eating there if you ever happen to be in Witney.

This Sunday was also my Dad's 80th birthday. We had a small party at his care home with this amazing Harry Potter cake. 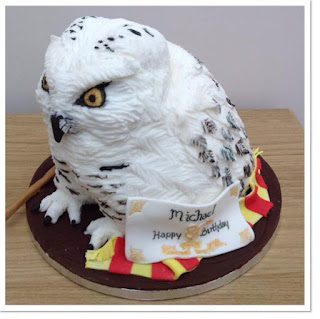 Dad's a big fan of both Harry Potter and owls so it was perfect for him. It seemed a shame to cut it, but cut it we did, and it was delicious. Thankfully vanilla sponge rather than owl flavoured.

When the weather is miserable,as it has been this last week, I tend to sit at my desk during my lunch break instead of going out. This means I inevitably I browse Ebay. Mostly I look at bags and last week has been no different. I snagged a couple of beauties and sort of forgot they were both silver until they arrived. Clearly I was having a spangly moment that day! 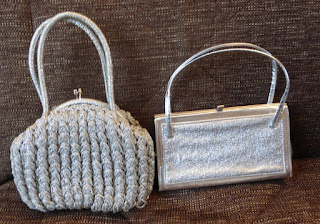 The one on the left is crocheted lurex and has a nasty stain that I need to investigate a bit before I have a go at removing it. 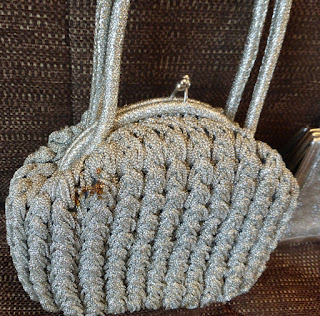 I suspect it may be rust which may well be impossible to remove, and if so never mind, the other side is perfect so I will just use it that way instead.

I finally finished fixing the other little Ebay bargain bag form a few weeks ago. 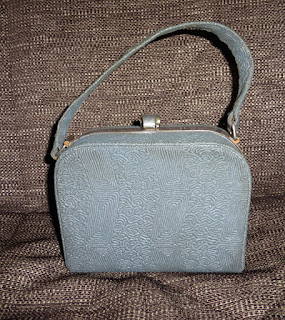 As you can see it cleaned up really well to an unusual dove grey and the handle glued back together nicely.

I also bought myself this brooch. I spotted one in a shop in Greenwich but as the price was horrifying so there I left it, instead I hunted one down on Ebay. 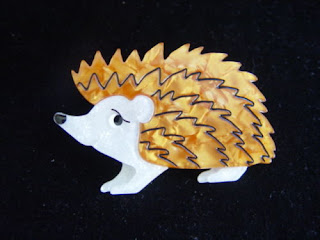 Finding bargains, that's one of the things I do love the internet for!

Finally my Mum brought over this fab red leather satchel. It was left over from an Age U.K sale she helped at. I honestly can't understand why, I think it's great. 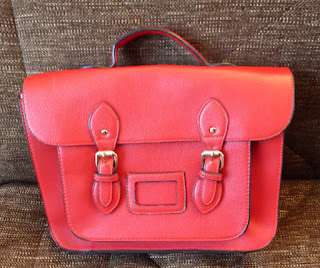