Where have the last two weeks gone?? In a flurry of good and bad things and busy times.

I had to do my first ever presentation at work which thankfully went well. Mind, if you would have put a glass of water into my hand just prior to, or just after, I would have frozen it solid!
I always get freezing cold when I'm nervous. I wish I could say I'll never have to do it again but it will be the first of many and I fear it is not something I will ever enjoy.

The same night I dragged Himself to see Gary Numan. I will confess I am sad I took him to this particular show as Gary has really gone back to his electro-pop roots, with 3 keyboards on stage and only one guitar. His sound had been a lot more guitar driven before now which I know Himself would have loved. This was most definitely not his cup of tea.
Oh dear.
I loved it but it's not the same when you know the person with you is not having a good time.

I will also add that in all of my almost 30 years of gig going, this show had by far the worst support band I have ever, ever heard, and that's saying something.
The biggest bunch of pretentious, up their own arses, whining drivel I have ever had the misfortune to stand through. At one point the singer even draped a black shawl over his head and the microphone stand to sing a song, what a twat.
I'm clearly getting to old for this shit.

Things at work have built to a crescendo and there was a massive blow up. Things were strained to breaking point and I actually started looking for a new job, which gutted me because I really enjoy working there but enough was enough.
Thankfully our manager called us all in individually for a chat and I was able to get everything off my chest. Let's just say I was guilty of letting things get to me and also listening to somone I should have know better than to.
The air has been cleared and I'm feeling much happier. I'm also being a bit more cautious about who I tell what!

After all of that, it was nice to have a weekend with no plans. Himself decided to go to Reading to see a film that wasn't on here and I went with him to do some shopping whilst he was in the cinema. I made a dent in the Christmas shopping which is always a great relief.
I did end up buying myself a couple of things. What can I say, I always do no matter how hard I try not too! 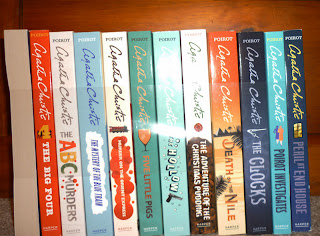 A set of Agatha Christie novels for £9 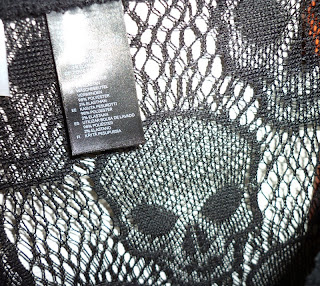 A pair of skull print lace leggings £3 in the sale at H&M. They would probably look more effective on but as they are on the radiator drying I wasn't about to test that theory today! 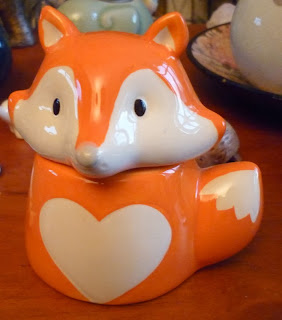 A little trinket pot that was going to be a present but I ended up keeping - oopps. 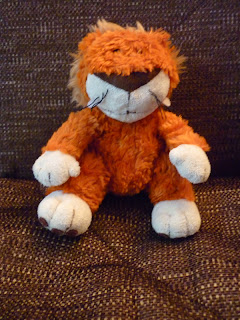 Finally this fella was 30p in a charity shop and I couldn't resist.

This week has been manic at work so it was blissful to head out to the pub for a plate piled high with carbs and a glass of wine or two with some friends.
We also went to see 'Frankenstein' again. This time with Jonny Lee Miller as the monster and Benedict Cumberbatch as Frankenstein. It was just as good.

Tonight of course was the 50th anniversary special of Doctor Who I celebrated that with a very dusty bottle of London Pride I discovered in the kitchen.
I've been fighting an on and off scratchety throat which I refuse to give in too. I have far to much coming up to be sick, which of course is always the time you get sick.....

Two go Mad in Newbury and a New Arrival.

Well it's been a while but in my defense I've been a busy bee.

Himself and I went to see Thor on Monday, Ooooooh it's good, I thoroughly enjoyed it. We also got a new shed roof on Monday, I think I'm still in shock I only reported it needed replacing on the Friday!?!

On Saturday Soo and I took ourselves off to pastures new for some much needed girlie time and to start the dreaded 'C' shopping.
We decided to try Newbury after being recommended it and it was lovely. Such a pretty town and with quite a good mix of shops, we did the real shops and the charity shops all whilst dodging the downpours. 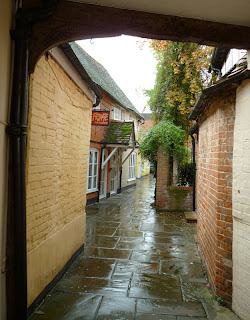 It has little alleyways 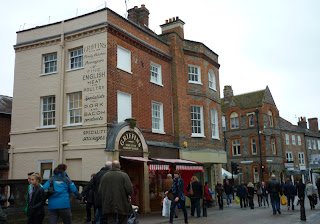 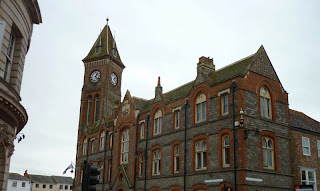 The Charity shops were very disappointing. For clothes it was the old story of over priced Primark and not a lot else. 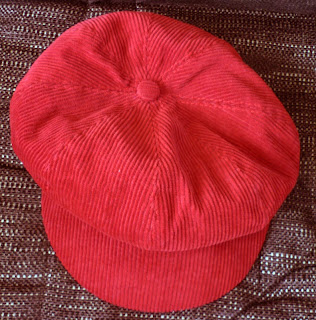 and a set of Gisela Graham 12 days of Christmas ornaments. They are missing the drummer drumming, but as they retail at £30 and I paid £2 I'm not too worried, I think I can find a drummer somewhere..... 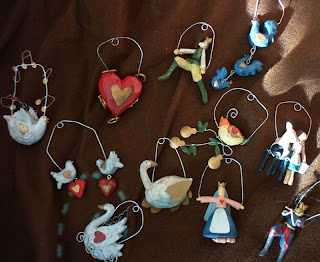 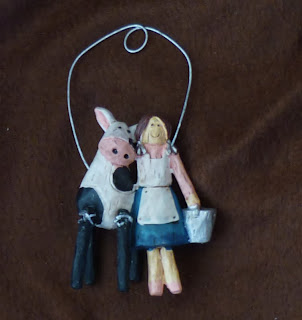 I particularly liked the maid a milking and her lovesick cow!

We had heard great things about the Debenhams outlet in Newbury but I wasn't that impressed, it wasn't a bargainous as I had been lead to believe so all I bought was 2 pairs of Snoopy knickers! (Well you know me and Snoopy.)

There was a good market and best of all a cracking Antique/Flea Market. We both scored some fabulous jewelery bargains there. Soo found a stunning Amber pendant and I found 2 gorgeous brooches.
This lovely whale 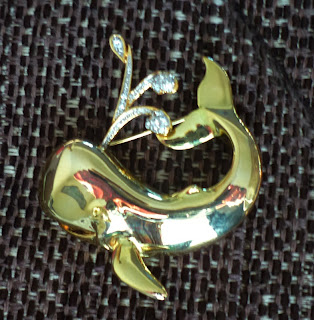 and this sparkly palm tree 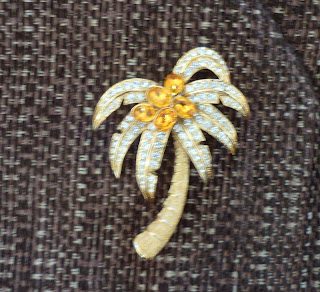 I *know* I'm not meant to buy myself presents at this time of year but I just could not leave either behind.

Finally I came home to 2 packages. I won these ace 1970's beaded shoppers on Ebay, both were 99p plus postage and I am thrilled with them. 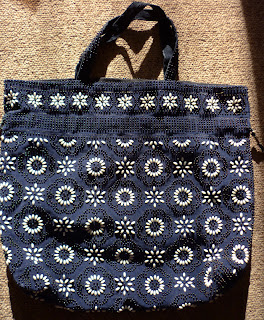 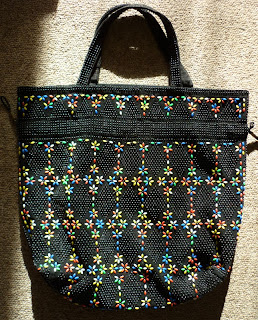 now that all is well, and all the people who should know do know, I can announce 2 weeks ago Niece Number One FINALLY arrived, and she is a little smasher.
She didn't arrive when the doctor said, or when her Mum wanted, but when she felt ready. Clearly once she has made up her mind she doesn't hang around as from start to finish it took just over an hour for her arrival!?!

I am very much looking forward to my first cuddle.

Frankenstein and a Little Shopping.

So Halloween has been and gone and so has our 16th Anniversary. Himself got me me some flowers with an ornamental cabbage in the bouquet (not sure what he's trying to tell me!) and this little chap 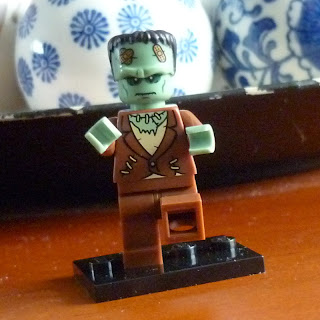 as a hint to what we were going to do for said anniversary. He took me to see a cinema screening of the National Theatre's production of Frankenstein starring Jonny Lee Miller and Benedict Cumberbatch.
It is the show where they took turns with the roles of Frankenstein and his monster each night. This version had Benedict in the role of the monster. 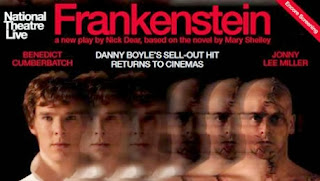 I was very excited to see this as you can imagine.
We were shown to our seats by a young man wrapped in toilet roll, I *think* he was meant to be a mummy but his wrappings had slipped so much he was just a young man in jeans and a t-shirt with random lumps of toilet roll round his arms and legs which trailed out behind him and gently shed sheets here and there like dandruff as he went up and down the stairs.

Before I get into the production I'll get a rant about the 2 women next to me off my chest. Himself said, very charitably for such a people hater as he, that they 'clearly didn't get out much'.
Firstly they talked quite a lot, not enough to give you the opportunity to tell them to belt up but enough to be irritating, (though I will confess I did find the comment about Benedict Cumberbatch 'he's very bendy isn't he?' funny.)
The one next to me reached into her bag about 2/3 through the production, got something out and started rustling it. At first I thought she was trying to open a sweet, but no, oh no, she actually just had a piece of paper in her hand that she was absentmindedly agitating!

I unleashed some of my finest passive aggressive behaviour and very pointedly looked her in the face and then at her hands and then at her face again. Thankfully she took the hint and stopped before I had to throttle her with some discarded toilet roll from the stairs.

The worst bit by far though was the one farthest from me kept making that really gross nasal throaty horking snort that old men make right before they spit. I mean this was a smartly dressed middle aged woman for god's sake, it was absolutely revolting and very distracting. Unfortunately she was too far away for me to throttle though the idea of lunging across at her got more attractive the more she did it!

Going to the cinema would be so great if it wasn't for the people.

The play was bloody brilliant. Bit slow and 'modern dance interpretation' to begin with but other than that brilliant and with a fabulous supporting cast. I can't wait to go again in a few weeks to see it with them in the reversed roles.
It's such a thought provoking story, it still blows my mind to think Mary Shelley was just 19 when she finished writing the novel. I could never have conceived something so complex and so worldly wise at the age of 19 that's for sure.

I actually had yesterday and today off work in lieu for those Saturdays I slogged away at earlier in the month.
So yesterday I went to a local garden centre with my Ma and Pa, completely forgetting it was half term so the place was rammed with families and shrieking kids.We looked at the Christmas decorations, as you do, bought some hedgehog food and beat a retreat!

Today I went into to town to grab some shampoo and a few groceries. En route I browsed the chazzas, as you do and came away with 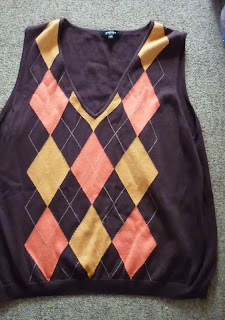 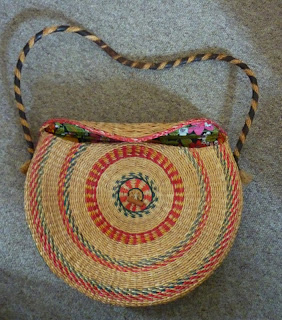 A huge vintage straw bag for a pound, It just needs a new toggle closure, and 2 bead necklaces for 50p 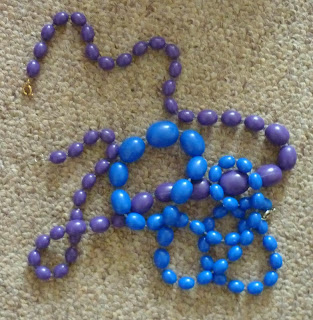 I also dived into Wilkinsons for bird food and found they had all their left over bulbs reduced to either 50p or £1 = RESULT! 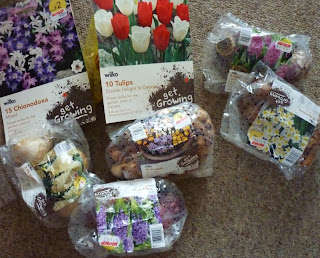 This little lot cost me £6 I restrained myself from going too mad! Now I've just got to find the time to plant them all....

I shall leave you with the suitably festive aspects of my outfit yesterday. I love Halloween and not just because it's our anniversary. 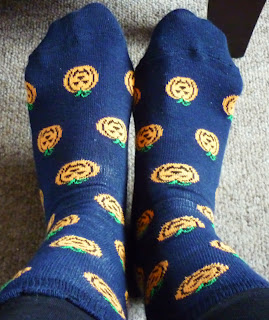 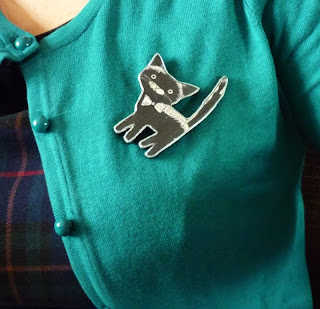 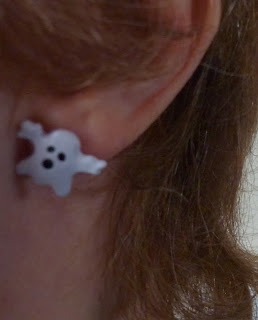 Oh yes and we had Halloween shaped pasta for tea! 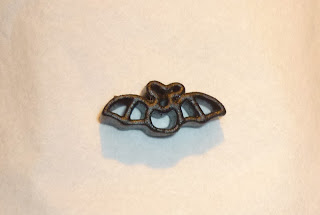