A May Round Up.

No idea what happened there but my follow up post didn't happen! I can't believe how quickly time is passing at the moment, I never seem to have 5 minutes let alone an hour to blog.

Anyway I shall carry on as if it were just the start of May. 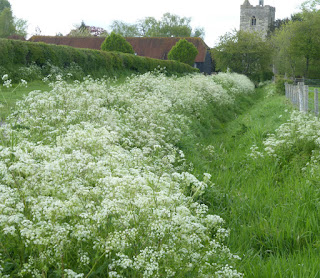 I did indeed go into Oxford for the 1st time since before Christmas, to meet my friends Charlotte and Alex. Alex had moved back home to Wales last year and I have missed her a lot. Technically she works in Birmingham at the moment, though like many of us she has been working remotely. However she had to go into the office for a day so took the opportunity to visit Oxford too.

I dropped off some paperbacks at the book stall at the train station on my way into Oxford, and delivered some reference books to the Oxfam bookshop when I got there. The rain was so torrential I actually had to take shelter under some scaffolding with my umbrella up until it eased a little. Charlotte & Alex met me outside the shop  and we walked to North Parade and managed to have tea & cake sat outside a cafe between showers, this was back when you could only eat outside at cafes or restaurants. From there we headed to university parks and meandered about having a good catch up.

For lunch we managed to find a table outside at Vaults the cafe under the university church in Radcliffe Square. Posing for a quick selfie by the Radcliffe Camera after we had stuffed our faces on their delicious food, forgive the demented hair, it was that windy! 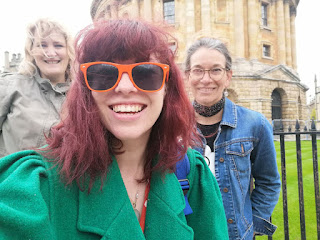 We also squeezed in a browse around Blackwell's before Alex had to collect her case and head for her train. I needed to nip to Marks for some undies and from there Charlotte and I went for a blissful browse around John Lewis, both spending our pennies in the haberdashery section.

By the time we left the sun had finally come out and as neither of us was in a hurry to go home we popped into the garden at The Red Lion off George Street and had a drink. I actually ended up getting home later than Himself! Oh to be a lady of leisure.

The other big excitement was FINALLY being able to visit my Dad again. They had allowed my Mum to visit since April but by the beginning of May they said up to two people could visit. We had to go 30 minutes before to do a lateral flow test, fill out paperwork & have our temperature taken, before being shrouded in PPE. The visit was only 15 minutes at first but I can't begin to tell you have amazing it was to finally be able to see him. Since then we have been visiting weekly, I now do the lateral flow test at home and the visits have increased to 30 minutes but we still have to do all the other checks and wear PPE. We are also allowed up to 5 designated visitors now so my brother and nephew number one can also visit.

From the end of May we have been allowed to take him out, but only for an outdoor visit. On my brother's birthday we liberated Dad for the whole afternoon and had a family picnic in the park next to the care home. He loved it though I think seeing so many people at once was a bit of sensory overload after being away from us all for so long.

Himself and I went to nephew number one and his girlfriend's house that night. We had seen it briefly when they moved in in November but that was in full lockdown, so it was lovely to be able to visit properly and get a full guided tour. They have decorated since that visit and really put their stamp on it.

We had a great night and finally left at 2.30am, with Himself being somewhat worse for wear (I had sensibly stopped drinking. He was good for nothing the next day so I left him snoozing and pottered in the garden.

I've been quite busy in the garden when I have had some time. I have been taking it steady as I gain strength back in my arm. Actually there has been a big change in the garden, you may remember me grumbling about the huge conifer 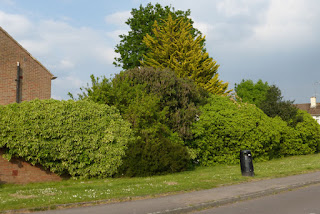 the one in the middle of this picture to be precise. Well the lady next door popped round to say they were having a tree surgeon out to take the overhanging branches off the conifer, and the tree you can see behind it, on their side. As well as reduce the height of the conifer a bit. I confessed I would happily see the whole thing come down and she got quite excited by that until I pointed out that sadly as we are renting I couldn't approve it. I offered to ring our landlord to see if he was up for it coming down as I know he plans to build at some point. I did ring him and he was amenable so I passed his phone number on for them to sort out particulars.

It turned out the tree surgeon was a one man outfit and said it was too big a job for him to remove the whole tree but he did reduce the height by 10 foot. 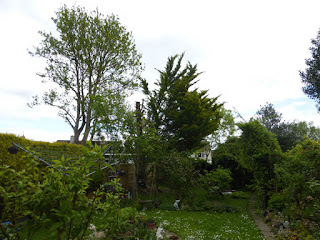 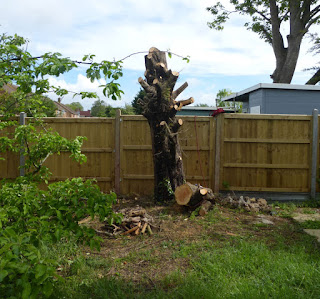 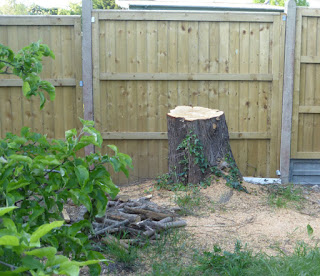 I mean fair play he cleared up and disposed of all the tree but it turns out he never even called our landlord who was a bit peeved as you can imagine! Though he did say if we were ok with it then he was ok with it. So yes...

Anyway now we have a lot more light in the garden!

I felt obliged to tidy up at bit at the end of the garden and there was a pile of rubble so I decided to build a rockery on a flowerbed near the kitchen that nothing seems to grow in. On the big new housing estate about a mile from us there is a small Asda and they always have plants outside. I have to say I have been blown away by the quality and the price and have been back several times now to stock up. 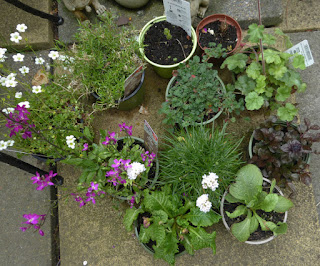 Here are the alpines I bought at 3 for £5 and a couple of other reduced plants. 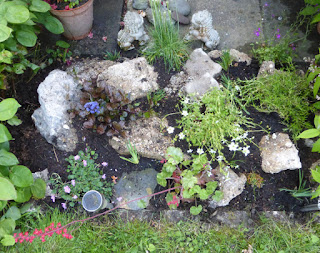 and here is my new rockery! I've since bought a couple more to fill in the gaps.

As I am still working from the kitchen table and tend to stand at the window drinking my tea or eating my lunch I have bought some colour for the table outside. 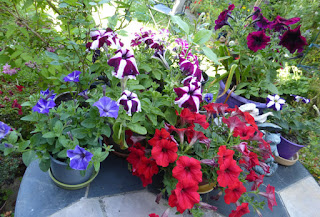 Mostly petunias, from left to right at the back Blue Star, Blackcurrent Sorbet and Velvet. 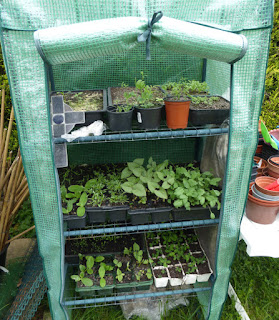 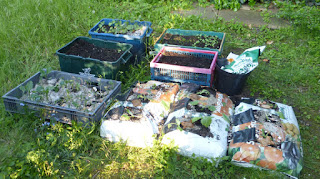 I've been doing full on battle with the slugs, they have been relentless this year. Much worse than usual. I go out every evening and pick them off by torchlight. No poison pellets for me with all the bird life and hedgehogs. I have tried the wool pellets,the broken egg shells, the grit to no avail but have found the copper tape quite effective.

The birds have been an absolute joy, though the juvenile starlings are SO noisy! 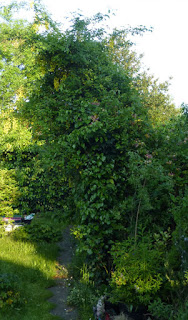 This laburnum tree and honeysuckle are like a bird high rise. It has a blackbird nest at head height, with a collared dove nest above that and goldfinches nesting right at the top! Today there were baby chaffinches, one of my favourite garden birds. It really does the soul good.

I think this flowerbed in the middle of the lawn was once a pond but it is now a circular alpine bed. It is full of cyclamens so I have to be careful how I dig. I tend to fill the gaps with pansies and the like 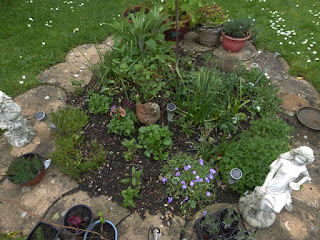 As a rule I leave things where they self seed and this foxglove is no exception. However it is insanely huge and has now dwarfed everything else in the little alpine bed. In fact it's actually as tall as me! Ridiculous but the bees love it. 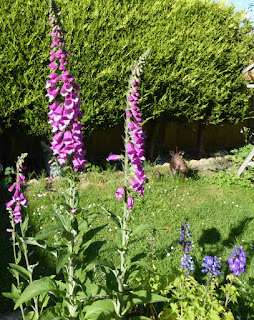 For the last bank holiday in May the weather was unusually glorious so we took ourselves out for a walk. 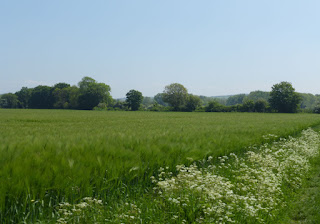 We ended up doing 10 miles and spent 7 of them carrying a box of eggs! We passed a house selling fresh eggs and when we looked they were from heritage breed hens and all sorts of colours like white, blue and green so how could you not?

It wasn't meant to be 10 miles but we got slightly lost, in countryside like this who cares though?

So that was May as ever I will end with my purchases. I was looking for something on Etsy and you know how it suggests things you might like. 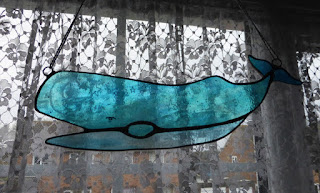 I fell in love with this glass whale when I clicked on the link, I just had to have it. He now has pride of place at our bedroom window. You can't really see but he has a moon and stars etched on him. I then saw another glass picture listed as 'from a seller near you' I absolutely had to have it. I am obsessed with the full moon, apparently as a cancerian it's in my dna, I'll go with that.

Anyway after I paid it turned out it was from the US! My heart sank at the thought of the import charge but amazingly enough it arrived without getting stopped by customs. 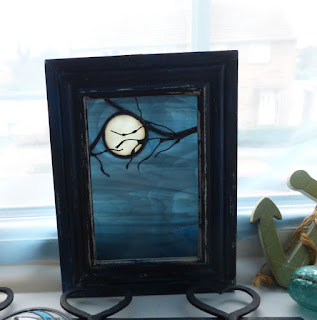 I'm afraid this photo doesn't do it justice, it's gorgeous.

Finally handbags, well there had to be a few! 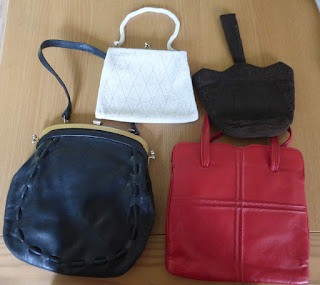 The white one is heavily beaded, I have no recollection of buying it or where from!?! It just arrived in the post one day. You know your handbag habit is bad when that happens!

The red leather one has 2 side pockets that someone had decided to super glue shut, I managed to ease them apart again but the glue has left a messy stain. 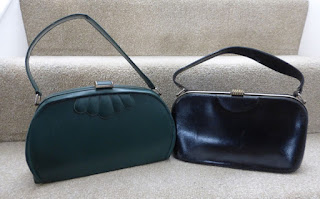 These two were Ebay purchases.  I need to polish them and try and find space for them in my out of control collection. I feel the need for another cull, not that I ever seem to part with more than one or two at most. It's bad, very bad.
Well that was my gallop through the rest of May. I will *try* to get back very soon with June and our blissful trip to Cornwall. Adieu.
Posted by Miss Magpie at 15:08 5 comments: