So August... initially August continued at the same mad pace to July but thankfully for my pocket, my waistline and my sanity after the fist week or so it settles down to a more sedate pace.

The first week I was out for dinner again but this time only a one course pre-theatre eat rather than a full evening of carousing.
Soo and I went to see the outdoor production of Wuthering Heights in Wadhan College gardens. Now bearing in mind this was the wettest August on record this might not have been our wisest move, but I have to say I was very glad we braved it because it was fantastic. 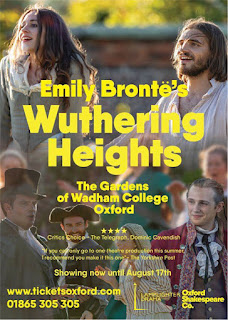 Soo had suggested going as she had read a rave review in the local paper and thoroughly deserved it was too.
A small cast of seven played all the parts, changing swiftly in a makeshift backstage area that was just a tiny gazebo with a curtain on a pole. They used step ladders to suggest the height of the peaks (and Emily at the window) played all the incidental music and made the sound effects too.

Written down like that it sounds crazy and like it shouldn't work, but it really did. Thankfully the rain held off until about 3/4 of the way through and was only torrential for about 15 minutes before easing. The cast carried gamely on, but the audience frantically scrambling into raincoats and popping open umbrellas did rather kill the atmosphere for that moment!

On the Saturday I had an impromptu visit to Salisbury. It turned out Himself had an appointment with a tattoo artist friend there and only mentioned it in passing midweek, because he thought I had been there before.
As it happens I haven't, the sum total of my paltry knowledge of Salisbury being it has a cathedral and that recent novichok attack! So I did a quick google search.
I decided it looked well worth a visit so I duly invited myself along. It was a quick journey time-wise but a bit of a faff as we had to change trains 3 times.

First things first, we figured out where it was Himself had to go for his appointment. Once that was done we had a bit of a mooch around the city centre and cathedral square until it was time. 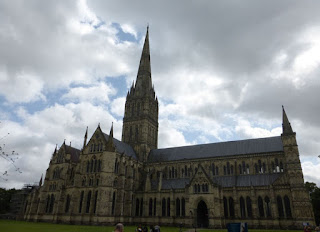 Me being me and living with someone who does not do vintage and chazzas, I also noted where the charity shops, a vintage shop and an antique/flea market were for my own perusal later.

I just had to share this house in the cathedral square, it cracked me up and I think I would be tempted to do something similar if I lived in a place where you have a constant hoard of tourists passing by! 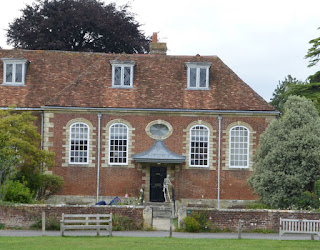 Once Himself was ensconced and being stabbed with needles I headed back to the vintage shop which was towards the station. According to some online information it was apparently meant to be amazing.

I didn't buy anything. The stock was ok, though very thin on handbags for my own liking and if I'm honest, I personally I thought it was a bit pricey.
Mainly the woman behind the counter had *such* a face on her it didn't induce you to linger let alone to interact with her by purchasing something, but lets hope maybe she was just having a bad day?

From there I went to the antique/flea place I had also spotted coming from the station. It was a sort of smallish warehouse over two floors with various different sellers stands.
There seemed to only be the one girl on the desk downstairs in terms of staff and she was engrossed on her phone. Indeed when someone came down to ask to see something in a cabinet upstairs she sighed so loudly and gave the grumbling under her breath impression that the request was unreasonable in the extreme and she was being so greatly inconvenienced I'd have been tempted to take her to the furthest cabinets upstaits and then change my mind several times!!

I'd be amazed if they didn't lose stock hand over fist as you could have pocketed anything and just walked out unobserved and unchallenged.
I certainly saw a couple of people who wanted to buy just give up and leave so if nothing else, sales were definitely being lost.

So far not so good... anyway I then tried a house clearance place also on the way from the station that was a delicious chaotic mess and where I almost bought a vintage parasol but talked myself firmly out of it because what the heck would I do with it and where would I store it??
In the end all I bought was this glass vase in the shape of an owl. 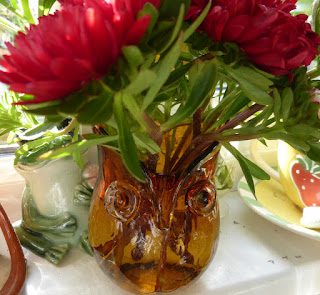 I have admired similar ones on the Magpie website but couldn't justify the cost. This one was £4 and after a thorough clean came up beautifully.

From there I headed back into the city centre and to the street with all the charity shops. 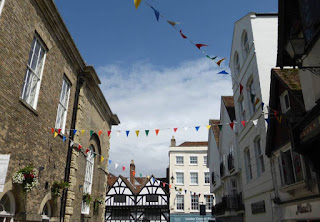 I did a systematic, quick but thorough search of all but one which for some reason was closed as I knew I had only a certain amount of time to fit everything in. All I bought was this sweet little vintage bag otherwise it seemed to be your usual mix of high street brands. When I went to pay the lady on the till exclaimed over the bag so much, turning it this way and that and opening and shutting it I literally had to wrestle it out of her hands to leave! 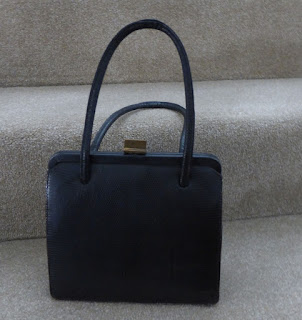 I then ended up carrying it over my arm the rest of the day because it didn't fit in the bag I had with me and I'd forgotten to bring a cloth shopping bag with me, I must have looked quite odd but did I care? Nope.

Sod's law meant that the one shop that was shut was the one that is meant to be the best for vintage finds according to those in the know.  Indeed it had a delicious looking handbag tantalizingly displayed in the window - Bah.

From there I cut through and back to the cathedral my plan being to go in and look round then find somewhere to have a cup of tea. Once I got to the entrance the queue to go in was ridiculous, so a little disappointed I had a wander around the outside and the cloisters instead, nipped to the toilet because when you see them you have to use them right? and checked out the shop. It turns out you go through the shop to the cafe which had the most delicious looking scones so I looked no further and bought one with a pot of tea. It was fabulous!

Fortified I went back to the entrance but there was still a huge queue so I went back outside and walked out towards the meadows and the river where it was lush and green and peaceful. 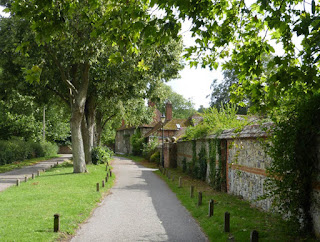 I would definitely like to go back and walk a bit further out, but as ever I had an eye in the clock so after about 20 minutes of walking I turned back.

As it happens I had literally just got back to the main shopping centre when Himself called to say he was done and to meet him outside burger king.
From there we went straight to a pub recommended by his tattooist so Himself could have a much needed pint or two.
It was tiny but we managed to find a wee table in the corner and due to his clingfilm wrapped and bloody new tattoo ended up chatting with a primary school teacher from Yorkshire. He was down for the holidays to go digging for dinosaurs and was also a Napoleonic battle reenactor! You really do meet all sorts.

We pondered over staying and finding somewhere to go for dinner but the weather seemed to be turning so in the end we headed home instead to watch the first Indiana Jones film, it being the anniversary of it's release.
I thoroughly enjoyed my day in Salisbury and would definitely go back.

We were super lucky with the weather because every day before and after it poured with rain. The next week I had a couple of days off, one of which was meant to be for afternoon tea with Soo and our friend Simon.
The last time we got together for afternoon tea was a shocking 4 years ago. It also ended in far, far too much prosecco being drunk so we planned to be more restrained this time round. The venue, as the last time was Soo's house. Unlike last time, where we sat out in the sunshine drinking like fish, this time it was a day of torrential rain so we stayed indoors.
We had a fabulous afternoon, stuffing our faces and prosecco drinking in a slightly more moderate fashion until it was time for Simon and I to leave and scoop up a rather worse for wear Himself at Oxford train station (he'd been out for a leaving do) and escort him home.

August ended with my annual trip to the Stonor Park craft fair with my Mother and another week off work, I'm definitely on a roll with this week off lark.
Of course the bank holiday was the weekend of sudden scorching hot weather so I couldn't have picked a better week if I tried.
In between flopping about inside because I don't do heat I did a serious amount of gardening, either early or late when it was cooler, and read a great deal.

I shall end with my July and August purchases. I forgot to say Soo and I checked out a new charity shop in her village prior to our epic day at Yarnton nurseries in July. It was an absolute little gem and we both bought some fab items. 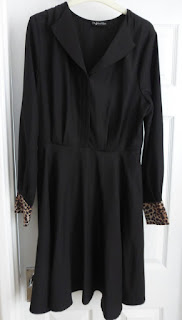 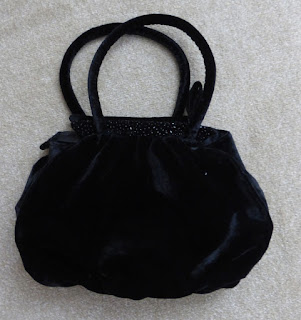 and this cute velvet bag.

Talking of bags I have bought just one or two for the collection! 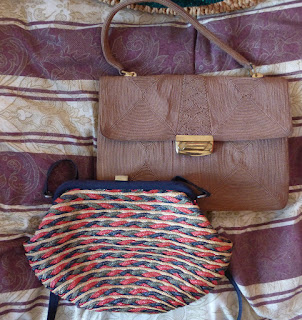 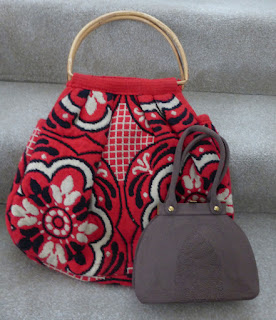 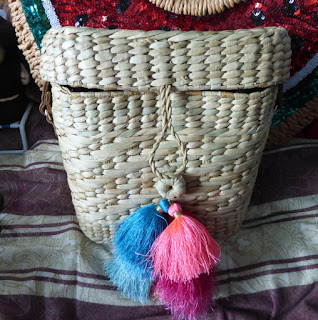 Talking of beach bags I couldn't resist this straw bag with it's colourful tassels.

I also seem to have ended up with several crab themed ones, either birthday gifts or bought by me with birthday money. 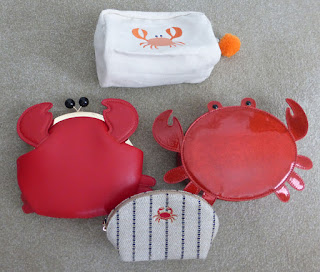 To clarify I am a Cancerian and I absolutely love the seaside so therefore crab items are not unusual in my house, but I don't usually end up with so many new things all at the same time and I've certainly never had a crab bag before.
I'm guessing crabs were 'in' this summer, but maybe not so popular because certainly the ones I bought with my birthday money were all in the sale!

Well that's August. Only 3 days of the chaos that is work and I'm off for our annual trip to Bournemouth I cannot wait!
More anon.