Well I did have a few things lined up to blog about in January but then the home computer decided to die and scuppered my plans.
Cue much cursing and stomping about by Himself as he set about fixing it.

I have to say it was a frustrating and strangely liberating in equal measures. I did feel like I was being forced to go cold turkey without the internets (before you ask, no I don't have it on my phone - I'm old school.)
I missed Facebook in a fashion that was alarming, but boy did I suddenly have a lot of free time in my day!
It really brought me up short and made me realise just how much time I do waste 'browsing' throughout the day when I'm just knocking round the house. I browse along with my breakfast, and lunch, and the numerous cups of tea I drink in between chores.
Suddenly I had time on my hands. So I took that time to do a few of the little jobs that have been sitting round for well, let's just say quite some time indeed.

First and foremost I FINALLY finished the lampshade for the Elephant Lamp of Wonder (it's only taken me 18 months!). I cannot tell a lie, it was originally a suggestion of my brother and I just ran wild with it. 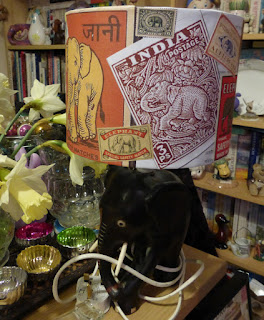 Now I just need to find a bulb and the right spot in the house for him.

Soo and I also went for our annual January Charity Shop Extravaganza and as ever we found some fabulous bargains as well as having a bloody good laugh.

I managed to acquire a stalker, who like the shop keeper in Mr Benn, would suddenly appear like magic at my side, but unlike the shop keeper would make some quip and elbow me in the ribs as he did it.
He appeared in not one, but four chazzas, and all with his wife in tow. Or perhaps she had started out that day browsing on her own and he had taken a liking to her too!

For myself I bought this leather jacket for a £10 (According to my stalker it suited me.) 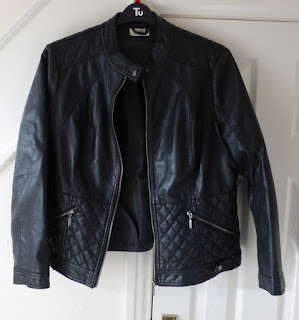 I also bought this fabulous carpet bag for £4 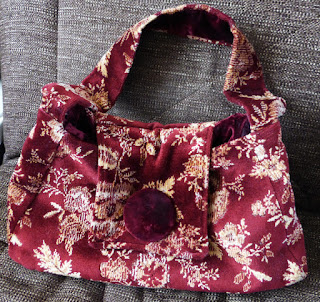 and finally this very loud scarf for a quid. 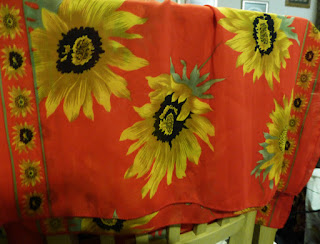 I also bought a tiny beaded bag and these cute little drawers for my Mum. She has always loved air balloons so it had to be done. 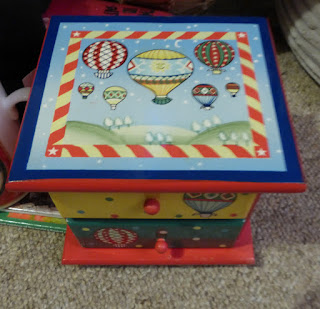 I'm sure you will be delighted to hear I may have already made my first disaster dress purchase of the year. Well start as I mean to go on right? 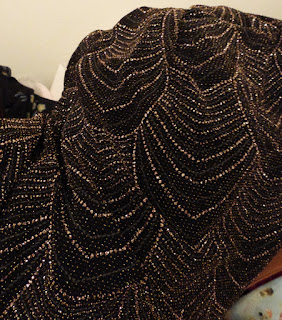 This heap of glitter is a tunic dress that was reduced to a bargainous £4. I love a bit of sparkle, I also loved the Art Deco style pattern and thought it was a lurex fabric, so I snapped it up.
The reason it is in the crumpled heap above is because as soon as I opened the bag and glitter poured ALL over me and the floor I realised it's not lurex at all.

To quote Ross Noble, one wear and I'll look like I have been out slaughtering pixies. So I'm still deciding what to actually do with it.

Now that January is nearly over I shall start my New Year's Resolutions. I never believe in trying to do anything in January.
So from February I will be watching what I eat, not dieting, but just less and healthier. Well that's the plan anyway.

I'm back at Pilates, and in February I go up into the next class EEEK! The teacher thinks I'm ready, I can't say I do.
There are some seriously fit people in that class, you know like a marathon runner and a mountaineer. Whereas I'm a bit fat, very unfit and bricking it.
They also have all the gear, so now I'm suddenly a bit self conscious about my cheap leggings and quirky t-shirts.

I want to read more. I never seem to have the time, or so I think, and I miss it. I have set myself the modest goal on Goodreads of reading 30 books this year. The is the Christmas gift book pile. 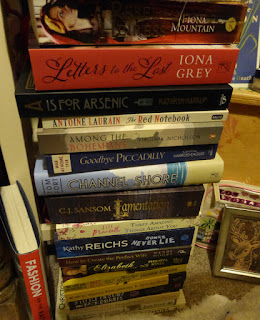 and the next to the bed pile. . 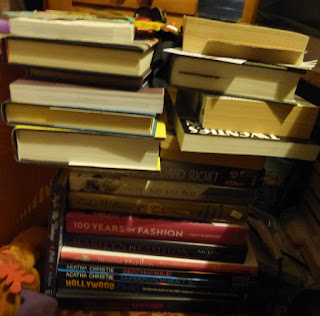 Those two alone should cover it!

This weekend we down in Margate helping Himself's Dad with clearing and cleaning the house. I did manage to take a couple of hours out to catch up with my dear friend Kay. We went to the local garden centre where we drank tea, ate gorgeous mango and passion fruit cake and browsed the sales. 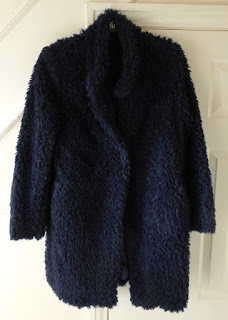 According to the lady in the franchise it suited me (deja vu anyone?) and I have to say I loved it. I wavered for ooh at least 30 seconds whilst Kay insisted must I buy it, so I did.

Final sale purchase to share with you was another, spotted by chance, impulse buy. 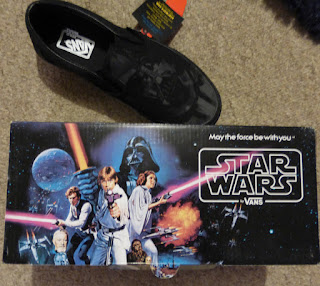 Darth Vader vans for £20. Result.
I showed them off in the office and got told by our young assistant they were sick, which apparently is a very good thing.