July She Will Fly.

My fun filled July started with the annual Eynsham (the the village where Soo lives) Carnival. She invited a group of us to come over for the carvinal and followed it with a barbeque at her house.
The highlight of the day is something called The Shirt Race which has been going for over 30 years and involves teams of two in fancy dress taking turns to push each other in a non motorized vehicle round the village stopping at each pub where they have to neck a beer and then swap places. 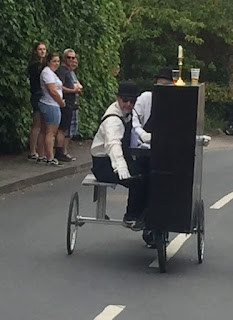 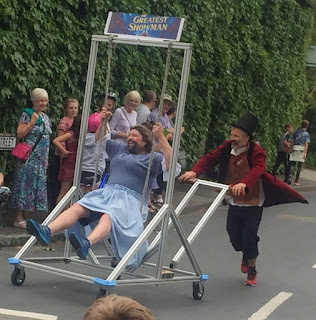 It’s always highly entertaining as some take it deadly serious whilst for others it’s more about waving at their mates and drinking free beer. 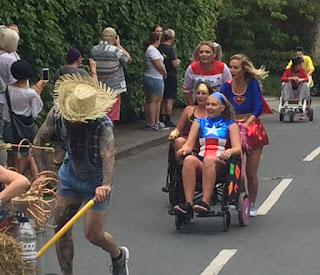 As you can see the top choice for mode of transport this year was the wheelchair!
We found a prime position to cheer the 57 entries on and watch the procession of floats that come after the race.
Everyone then heads to the sports fields where there are displays, a funfair, food stands, a beer tent and craft stalls. Once we had had our fill we headed to the pub for a couple of beers before heading back to Soo’s house to fill our faces and drink lots.
In true British fashion we ignored a few rain showers, stoically sitting out round the fire basket until it started to absolutely pour down. At which point we also realised it was actually very late and we were on the drunken side of sober so it would be a good idea to go to bed.
The next weekend I was back over at Soo’s and we headed out for a day of shopping at Yarnton Nurseries. Neither of us had been there for years so it was quite a surprise to see how much it had expanded.
The last time I went it was a smallish garden centre with a cafe and a gift shop that randomly had a few cabinets of antiques at the back.
Now it is a large garden centre with a restaurant, various franchises (The Works, Peacocks, Bon Marche etc), a big ‘outdoor living’ area out front, shoes, bedding, a bathroom specialist, a pet store and a huge separate antiques centre round the back!

Well as you know from this blog, we are not women who crumble in the face of a shopping challenge, we accepted the gauntlet that Yarnton Nurseries threw down for us and set too with a will. We did the outdoor living, most of the clothes, one shoe franchises, the bedding and The Works before pausing for a delicious lunch in the restaurant.
Refueled we did the gift shop, the second shoe franchise, the rest of the clothes and had a blissful browse round the plants. At this point my inner tea-o-meter declared it was time for a drink so headed back to the restaurant where we shared a pot of tea. After which we had a quick scope of the bathroom bit and finally the antique centre.
Sadly this was where we had an epic fail, we hadn’t checked the opening hours. We were literally just beginning a good nose about thinking we had at least a hour when they suddenly announced over the tannoy they were shutting in 10 minutes. I tried to do a quick fly by of the rest of the place but it was impossible, it was just too big.

So we will definitely be heading back but I think we will be doing the antique centre first that time.
I must confess at the time of going I hadn’t read any blogs for ages and I didn’t know about the slow fashion pledge. Sadly I bought 2 pairs of work trousers and a t-shirt for me as well as a top for my Dad and 3 tops for my Mum for her birthday. So another epic fail in that respect 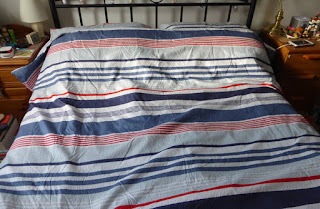 I also bought this fabulous nautical bedding set at a vastly reduced price and some books in The Works.
I had the next week off work. It was my birthday on the Wednesday and as I have made it a policy never to work on my birthday ever since I turned 40, this year I went even further and took the whole week off.
I spent a couple of days pottering and doing odd jobs around the house.

Is there anything more delightful to a bookworm than waking up, making a mug of tea and taking it back to bed for an hour or two of reading? Well I did that every single morning. Bliss.

My Mum came over on my birthday and we went into town to look round the shops and have lunch. Mum had a major sort out and cull of her wardrobe last year and was on the hunt for a couple of sundresses (as she now has none) and a top that would match a lovely skirt she has prior to going on holiday in September.
We found her a couple of bits and after lunch we called in at M&S for a cake, then the Co-op for a chilled bottle of prosecco from their fridge which we took up to my Dad’s care home to share with him.
Himself and I were going to go out for dinner but then he arrived home with all the accoutrements to make spiced rum cocktails. By the time we had perfected the recipe we couldn’t be arsed to head into Oxford or Reading so we just nipped down to Prezzo in town.
On arrival we were told it would be an hour before we could even be seated as they were short staffed in the kitchen so we turned around and went to the pub up the road for pizza and wine instead!

I was surprisingly bright eyed and bushy tailed the next day and made up for my indulgences the day before with a strenuous Pilates class.
On the Friday I had arranged to go out for the day with my friend Charlotte. I caught the train over to Charlbury  where she was waiting with her car and we then drove to Stow for a quick wander around in the rain before lunch at Hufkins.
I ordered the welsh rarebit and will admit I was expecting posh cheese on toast and not the dish of molten cheese with some bread submerged in it that arrived!
That said as a proper cheese monster I was delighted and attacked it with gusto. How have I never had this before?? I will confess it did defeat me and I had to stop with a bad case of the cheese sweats. It was absolutely delicious though, I do love Hufkins.
Repleat we headed to Chastleton House a fascinating National Trust property in The Cotswolds. 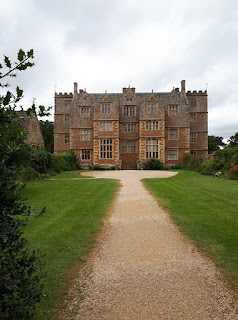 It was built in 1607 and was owned by the same family until 1991. As the centuries passed they became more and more impoverished meaning the house remained pretty much unchanged but also fell into bad disrepair. 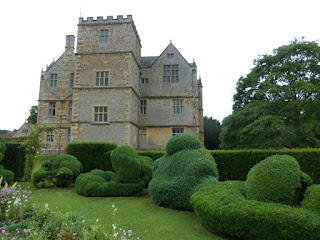 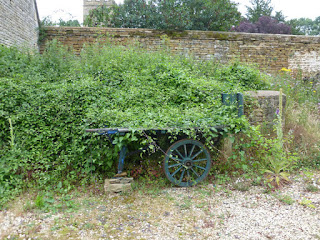 The National Trust stepped in in 1991 but decided to just halt the ravages of time and conserve it as is rather than restore the house so it is a hugely atmospheric place. 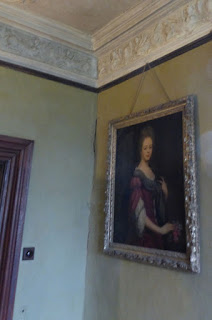 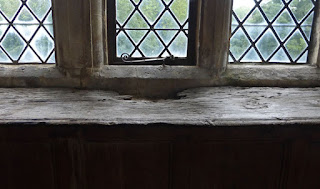 It feels like the family have just stepped out for a moment yet it also feels incredibly sad somehow, the peeling wallpaper and huge cracks here and there just seem to add to the melancholy. 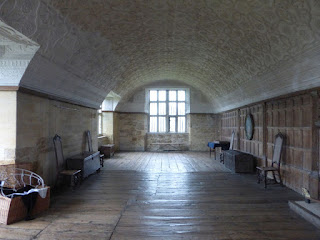 From Chastleton we headed back to Charlbury and onto the train into Oxford for drinks with friends from work.
The next week Himself and I caught the film Yesterday which was fun, 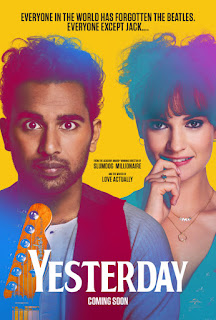 I also had another 2 days off work!(can you tell I am frantically using up leave??) Thursday was my Mum’s birthday and also the hottest day of the year. We gamely collected my Dad from his care home and wheeled him out for pizza to celebrate. The food was delicious but we were literally melting as there was no air con and no through breeze, I spent the whole evening fanning my poor Dad with the drinks menu!
I got to catch up with Nephew Number One and hear all his news which was lovely, we also had an in depth conversation about spiced rum, as we are both big fans.
The next day I took Mum out for her birthday. She chose so we ended up at yet another garden centre, this time in Haddenham. We had a good catch up over lunch and a lovely browse.
Mum is going to have the patio re-done and then wants to redesign her garden a bit, so we were discussing ideas and sussing out plants as I have promised to help with the grunt work when the time comes.
The last week of July was just mental. One of those times where I suddenly realised I had arranged 3 lunches and 2 dinners in the same week as we also had a team building day at work!

The team building was actually good fun, we spent the afternoon at Junkyard Golf in Oxford, one of those places that’s basically a nightclub with crazy golf thrown in.

It was great fun but I must admit come Saturday I was very happy to sit quietly at home and just eat tomato soup and crackers.

There have been more bag purchases but I'll maybe do a July/August round up.