Walking Back to Happiness.

Well this may turn into an epic post or it may become two!

As ever I have had a post in mind and then for various reasons haven't posted anything. In the early days this was due to only being able to type one handed and after a day at the keyboard for work I was in no fit state to type for leisure.

I have to say working from home has been a boon with my injury. I was able to either start a bit later or pop upstairs for a lie down in my lunch hour in those early weeks when I was getting very little sleep. Thankfully after 5 weeks I was finally able to lie down in bed, albeit with my shoulder and arm propped up on a rolled up jumper.

I can't even begin to describe the joy that came at 7 weeks when I could finally sleep curled up on my side again. It really is the little victories!

I had booked a week off work in April to spend doing some heavy duty gardening, I'd had a soil delivery and everything. I was feeling pretty downhearted that I wasn't going to be able to do anything at all but by the time the week came I was able to spend a few hours each day gently pottering about. Luckily for me the weather was absolutely gorgeous too. I did have my limitations brought home on the first day when, hoping to take advantage of the gorgeous sunshine I did a load of laundry, then realised I couldn't actually reach up to peg it to the line! Cue much swearing.

I got Himself to move a big bag of compost next to the table I use for potting up so I was able to plant some seeds. I can't begin to tell you the good it did me just to be out in the fresh air doing something I love. Our resident robin was next to me the whole time supervising. 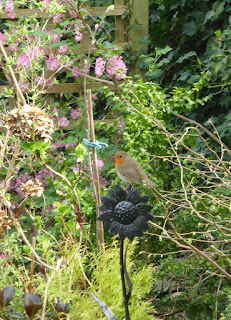 I chat away to him/her, I'm sure the neighbours think I'm insane and talking to myself. Mind you all the close attention became clear on the 3rd day when he/she arrived with two adorable babies in tow. I spent the day nipping in and out fetching handfuls of smashed up peanuts for them to eat.

As ever my bird feeder has been a source of much joy when you can't do much else but stand at the kitchen window with a mug of tea and watch the world. I soon spotted someone else watching it with even more intense attention. 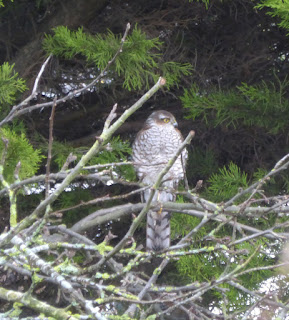 No Mr Sparrowhawk, no. I went and chased him off a few times. I know it's meant to be a sign of a very healthy ecosystem, but frankly my inner ecosystem was too fragile to cope with murder and mayhem at that point in time. 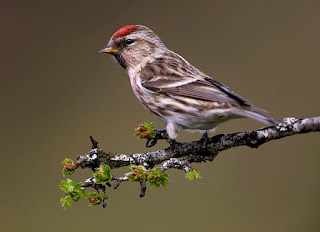 Whilst I was outside and standing very still, kind of figuring out what I might be able to do next I spotted one of these on the bird feeder. I have never seen one before and once it had flown off took to the internet to find out what it was, a Red Poll. I never cease to be amazed at what visits this suburban garden.

I've been plugging away with the daily exercises for my arm. I had a call with a different physiotherapist, it really is farcical! Him trying to describe how to do an exercise over the phone and me not understanding what the hell he's on about. Mind you I did burst out laughing when he asked me in his very broad Yorkshire accent if I was able to "reach round and touch your bumcrack" (sadly not) I couldn't resist asking if that was the official term for it.

When I had my follow up at the fracture clinic the consultant rolled his eyes and said 'I have NOTHING good to say about the service since it's been outsourced.' According to him, and indeed the 2nd physio I spoke to, my injury needs face to face treatment, but even if I was put forward as an emergency they couldn't guarantee I'd get any at all, and even if I did it would be at least 6 weeks. It really is ridiculous in the extreme. I have gained a fair amount of movement and range but but recently I seem to have plateaued which is very frustrating.

Other than working I have been walking. I'm so grateful I can still do that and get out and about in the fresh air. I finished the fateful Cabot Trail challenge and got my hard earned medal. 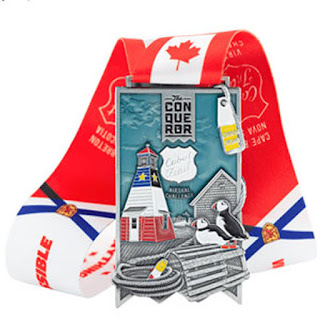 I followed that with the Mount Fuji challenge because I loved the beautiful medal. that was 43 miles and I did it in 2 weeks. 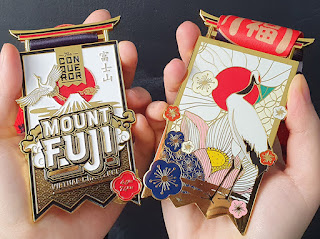 I'm now doing The Kruger National Park challenge which is 265 miles. I'm walking pretty much every day which is hopefully going to help with the lockdown weight gain as well as the fact I need to build up/maintain my bone density. I was always an enthusiastic dairy eater, particularly cheese and yoghurt, but since the fall I've been drinking milk everyday too.

Since lockdown I've also discovered the joy of online events. I have enjoyed talks by TV personalities like Monty Don, Nadiya Hussain, Tom Allen and Escape to The Chateau's Dick and Angel Strawbridge, authors like Marian Keyes and musicians as eclectic as Gary Numan and Bananarama!

I have been thoroughly enjoying the serious of talks hosted by the Fashion and Textile Museum in London. I am now a life long fan of their Head of Exhibitions Dennis Nothdruft!

I also found a fascinating one for the M&S archives and have followed a couple by the V&A. It's going to be a while before I go to exhibitions again in person, so this is a good way to live vicariously. You also get a very in depth, knowledgeable and close up tour.

I have a favourite walk around here along an old disused railway line to the village of East Hagbourne, oh if money were no object I would buy a house there like a shot.

Once I was able to actually use my camera again I took it out with me. Has anyone else noticed this year seems to be particularly good for primroses and cowslips? 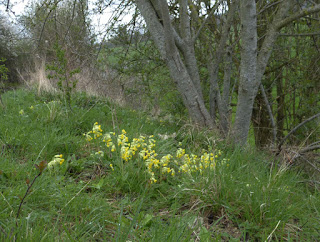 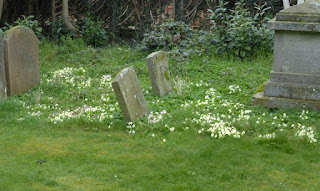 I have never seem so many cowslips.