Tales of Lockdown Part One.

Well this wasn’t the post I was planning to write nor is it being written when I planned to write it! I was planning a fairly speedy post on the tail of my last one with (all) my lockdown purchases.
Instead various events have happened and here I am a month down the line again.

I guess I should start where I left off. We were rudely awoken before 8am one Thursday morning by scaffolding being put up on the house. I speedily got dressed and went to unlock the door to the side passage so they could get round the back of the house as well.
Non too pleased as you can imagine by the fact they just rocked up a couple of days later than expected and didn’t bother to knock (though that became a theme.)
So the work to remove the leaking guttering that was meant to happen last November, then this February, then this March was finally going to happen.

The roofers arrived the next day (this time we were up and dressed at 7.30am) and again just climbed straight up the scaffolding without knocking at the door first. I again went down and opened the side door and in an attempt to be friendly said good morning and asked about the job. The guy was vague, so vague I started to feel myself getting annoyed. He did laughingly say that he did a fair bit of work for ‘the guys’ at the estate agency our landlord works at and that they were all the same.
They all wanted work done as cheaply as possible which did not exactly inspire confidence. As Himself said he was basically admitting from the get go he’s a bit crap and will cut corners.

I said “I gather this is going to be noisy and might be a bit messy” His reply was “ It will probably be noisy but it shouldn’t be too messy” I came in not feeling in anyway reassured, which as it transpired was the right way to feel.The job spec was that the old concrete guttering would be cut off flush with the house using an angle grinder and then new facia boards and guttering put up.

Instead, you know those pneumatic drills that are used to dig up roads? 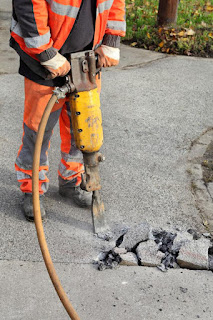 Well that’s what they used. The noise and vibrations were insane, the lumps of concrete flying about and raining down on the garden even more so, because of course they didn’t have netting up to catch it. (They were up there in shorts with no safety boots or hard hats so of course they weren’t going to have netting!)
About 40 minutes in I looked up from my laptop to notice an ominous crack in the ceiling of the bay window downstairs I called Himself in and he figured it must be due to the weight of the concrete falling on it. I then went upstairs to use the toilet and on coming out of the bathroom went into our bedroom for some reason and noticed something white on the floor.
Closer examination showed it to be a lump of plaster, even closer examination revealed cracks in the outside facing wall, big chunks of plaster missing from above the window frame and dust everywhere. 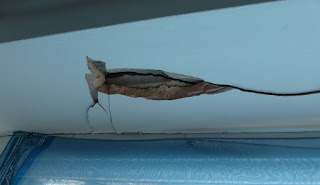 This was the case in every room upstairs with some of the cracks so big they went right through the brickwork, I could have wept.
At this point the roofers had just disappeared so Himself called the landlord who to be fair came over within the hour went ‘Ah!’ in an embarrassed way and sighed when he saw the mess, said of course he will send someone out to fix it all and left.

Only one of the roofers returned 3 hours later and started to clear the rubble off the scaffolding. He knocked so much down on to the roof of the conservatory we had to go out twice and say something because it is only a plastic roof and we had visions of it caving in!
About 3.30pm I suddenly realised he had gone, again without a word so I got to spend the next 4 hours clearing up.
The landlord had asked Himself to send him pictures of all the damage and whilst he was taking those our neighbour came round to say the little roof above their bay window had several broken tiles where a large lump had fallen on it. So Himself went and took a picture of that too whilst I got the ladder out and using a trowel to scoop it up, half-filled a bucket with all the bits of rubble out of the guttering on the conservatory where it had been so helpfully swept!?! FFS
I then cleaned our bedroom enough that we could sleep in it, before heading over to my brother’s house to wish him a happy birthday and collapse in a heap in their garden ata social distance with a large glass of wine we had brought over with us.

The next day was Saturday and Himself was in work so I got up early in case the roofers came (they didn’t) and spent the whole day clearing and cleaning. No easy task when you have as much stuff as we do. I actually filled a carrier bag with bits of brick and plaster and who knew my C-19 facemask would come in so useful outside of the supermarket?

By some kind of miracle none of my pieces of china and glass on the window sills got broken, I have no idea how they didn’t, but I am hugely grateful.
The hot weather was not so much fun for me sweating cobs in my face mask, but great for getting the curtains and nets dried after I washed them.
Someone in this house clearly loved their strong colours. There are drips on the inside of the door of the under stairs cupboard in bright fuchsia pink and fallen plaster the back bedroom revealed it was once a vivid violet!
So yes my Saturday was 7.30am – 7.30pm cleaning with just a brief stop for brunch. I even had to sweep part of the lawn with a broom . Our mower would have been wrecked if I hadn’t there were so many bits of stone. 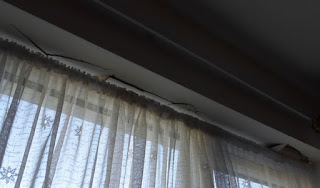 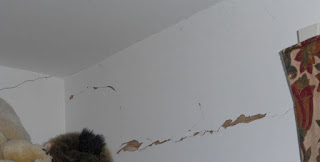 Sunday was not a good day. I’ve been battling a bit with the blues anyway and this was no help, plus I don’t do heat at the best of times either so I retreated upstairs and spent the day lying on the bed with a fan on reading.
Part of my fed-up feeling is knowing this means a massive amount of work for us when the landlord finally does get the decorating done. We both have a lot of ‘stuff’ and it will mean completely moving rooms around and worse emptying my biggest wardrobe to move it so the decorator can easily get to the walls that need making good.

which were filthy with dust.The scaffolders arrived at 7.30am the next day to dismantle so it was a good job I did.

Soo popped round on the Monday afternoon for a distanced chat with tea and cake in the garden and my Mum called by on the Friday to do the same and pick up some geranium and courgette plants, but sadly as it started to pour with rain she left after about 20 minutes which was a shame as I know she is finding all this time on her own challenging.

I’ve managed to see my Dad a couple more times when the weather has been good enough for them to wheel him out onto the balcony, but otherwise they are still on full lock down as they have had several cases of covid on the ground floor. Poor Dad is struggling with spending all day every day confined to his room and not seeing anyone other than when staff come in.

I shall sign off here with some of my early lockdown purchases.

Way way back in the mists of time before lockdown I fell in love with a dress in Seasalt that I couldn't stop thinking about. So after a particularly stressy week I treated myself to it. 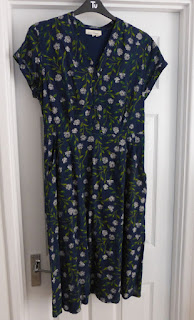 I do love the ethics of Seasalt even if their prices do make me blench sometimes.

A few weeks into Lockdown I was on the internet looking at something or another and somehow ended up looking at brogues, which lead me to the Clarks website, which had a sale on and you can guess the rest 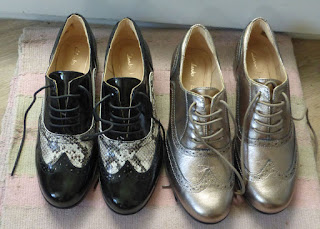 Shoes for work when I ever get back there and more brogues for the collection, that are neither purple or red. Which are the only two colours I agreed with myself I'm allowed to buy if I see them, otherwise it was meant to be no more brogues! No will power, it's as simple as that. 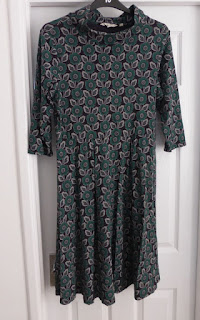 Turns out there was also a sale on the Seasalt website so I got another dress this time vastly reduced and a shades of green Breton top (not pictuted) also in the sale. 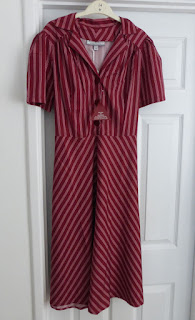 I may have bought this dress from the Rock and Romance sale too...

I have been watching the rerun of all the episodes of Escape to the Chateau on More4 as well as Escape to the Chateau DIY which I had never seen before. Poor Himself is not a fan but sits gamely through them. Anyway in one episode Angel had found these amazing vintage wooden tiger ornament things which I instantly wanted desperately. I trawled the Bay of E but anything there was either naff and or way over my budget. So then I just looked at 'vintage tiger' generally 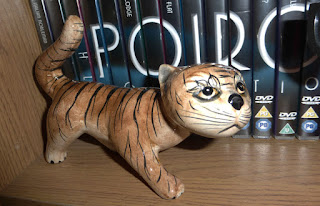 and found this little ceramic one for a couple of quid. I just had to buy because with it's thick black eyeliner and miserable/grumpy face it is the most gothic tiger ever. 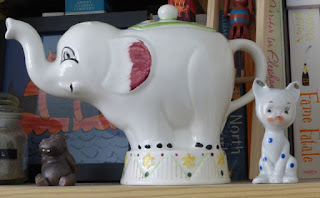 Whilst I was looking at 'circus tiger' I found this teapot. It's no tiger but it delighted me in more ways than I could begin to say so I bought it too! 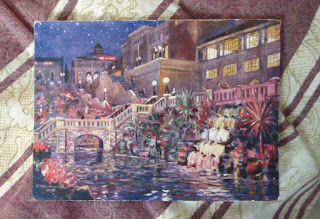 Also on Ebay looking for vintage postcards for an idea I had had for Himself's birthday back in May, I found this one of Bournemouth Pavilion gardens at night in the 1950's which I just loved. I plan to get a frame for it once I can get back to the Wednesday market in Oxford (it's an unusual size.) 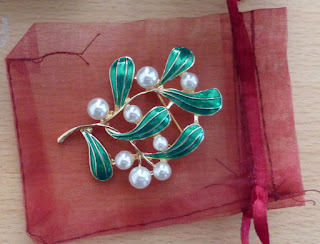 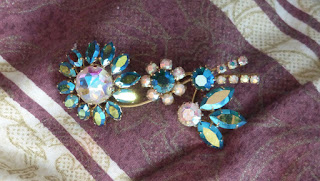 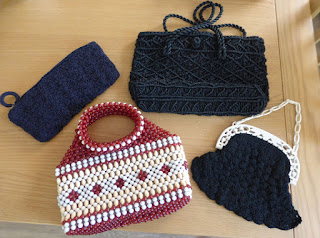 and of course a handbag or two at various points of early lockdown...

I’ll be back with part two anon. So be prepared for handbag drama and garden excavations, plus more lockdown purchases.