September - Comfort in the Familiar

I know it's not quite over just yet but hey I'm always early for things so here's my monthly round up.

Firstly as predicted last post I did indeed go back to Henley on Thames and much sooner than even I had anticipated. Mum and I made plans and then they changed so we decided to just go to Henley instead. It was a gorgeous day and we haven't exactly had many of them lately! 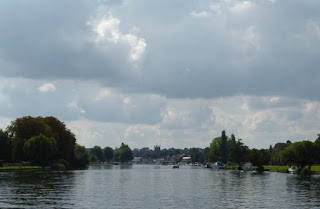 Interestingly I had a completely different day out with Mum than I did with Soo, visiting (mostly) different shops, eating somewhere else and taking a leisurely boat trip on the river. It was also clearly the September day for a wedding as during our time in and around Henley we saw 5! From 2 traditional church ones to one on a restored paddle steamer, another in the grounds of  a temple style folly on a river island and finally the sumptuous white linen and sparkling crystal laid table set out in the middle of a field far from anywhere that left you wondering how the hell they got it all out there.

Another lovely day ambling about and this time I took the camera and snapped away to my heart's content. We sat in Costa and did a quiz from someone else's weekend papers and it seems I am a 'Questioner' who is 'pathologically incapable of making a decision' which made us both roar with laughter because never a truer word spoken!

I bought a new bath mat, a plant pot and this rather lovely brooch. 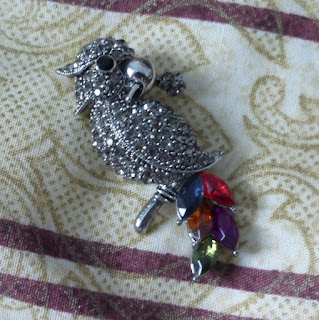 Talking of weddings Soo and I headed down part of the Thames Path this Saturday on our way to Binsey via The Perch (a lovely and famous Oxfordshire pub) as they were having a fete.

We actually didn't make it to the fete until 4pm as we decided to go for a pint or two in The Perch first and there was a wedding on in the grounds. As it goes we found ourselves with a splendid ringside seat and spent a blissful afternoon indulging in one of my favourite pastimes - people watching. That and giving a running commentary/vicious critique on the guests outfits! Let's just say hardly a one could accessorize and don't get me started on the ill advised and ill fitting underwear! So many lovely outfits ruined by a dodgy bra, or knickers or both.  What better way to spend a day?

We did a quick circuit of the fete which was pleasingly busy for a tiny village fete but not up to much despite that fact, so we ate a wedge of coffee and walnut cake and headed home.

September is of course the month of our annual trip to Bournemouth. As ever we had a fantastic time, if a slightly surreal one at times.

We arrived and checked into our hotel. I found a new one this year The Tudor Grange 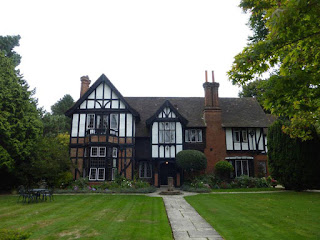 Himself said we had to stay here because it looked like the location of a murder in an Agatha Christie novel. He's not wrong.
Built in 1927 but using many genuine parts rescued from an original Tudor house that had just been demolished in Berkshire it was everything that fills my heart with joy. 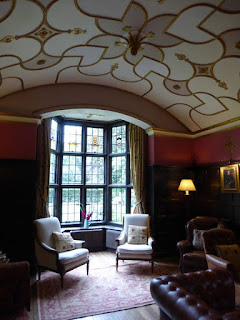 And yes if I was any kind of proper blogger, I would have had some fabulous shots taken of me reclining in a suitable period outfit in this stunning setting, but I'm not, and this holiday was all about hiking and relaxing anyway so blah.
The only thing that let it down was the shower which was, as Himself so aptly described it, like standing under a shower that was being hand pumped by a small asthmatic child in the middle of an attack. Looking at TripAdvisor reviews on our return this seems to be an on going issue but it wasn't a deal breaker and we will definitely stay there again.
Unlike other reviewers the lack of proper reception desk didn't bother us in the least, we had to ring the bell on our way out one evening when a bulb in our room blew and tripped the rest of the lights. On doing so a man instantly burst out of the door right next to us at the bottom of the stairs scaring the absolute bejesus out of us both!
Once we had recovered ourselves and explained he was perfectly charming and said he would replace the bulb and reset the fuse box right away. So we headed out for dinner with me sniggering away as we left. I then had to explain to Himself that the reason I was laughing was that the door at the bottom of the stairs that the helpful man had burst out of was in fact a toilet!
We concluded that as there was no reception to sit behind he must have taken to sitting in the toilet just in case he was required.

Anyway I digress. On our first day we headed into town  and within 10 minutes experienced a full on jumping out of the car, fist fight in the middle of the street, road rage incident which was a tad unnerving. We crossed the road, cut through a car park and randomly came across all these fabulous vintage cars. 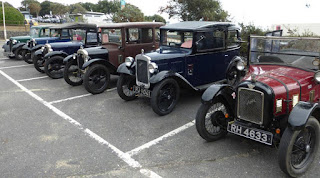 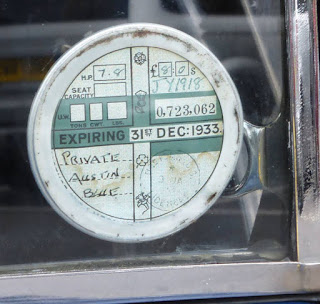 How cool is that tax disc???

We were on our way to book a table for the next night at our favourite restaurant. It's a tiny family run Italian and when we got there the Father was entertaining 3 of his pals at a table littered with dishes of bread, butter and empty wine bottles. As we waited to confirm our table we got offered a glass of wine. I declined admitting I'm not a fan of red, but Himself on being asked if he liked red and answering in the affirmative found a glass thrust in his hand with a "try this one, we are doing a wine tasting" he gave his opinion and instantly had another bigger glass of a different red pushed at him. The next thing I knew the owner popped up from behind the bar confirmed our table and handing me a glass of white wine "seeing as I didn't like red."
We were told to "sit down sit down" and ended up staying for about an hour chatting and drinking wine. Turns out one of the guys Brian was a champion speedway rider back in the 50's and knew the speedway track at Oxford very well, it was fascinating to hear his stories but as they were having some kind of 5 year reunion we did drag ourselves away to leave them to their party. I did sit there at one point and think I've not even been here an hour yet and here I am necking wine with some complete strangers!

We mooched about the town reacquainting ourselves, seeing what was new and ending up eating chips on the beach until the wind and rain drove us back to the hotel. 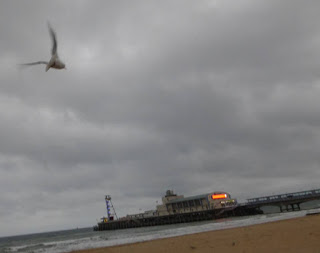 The next day we had decided to go to Brownsea Island because we haven't been for quite a few years now and last time we didn't really get to see the red squirrels.
The forecast had been dire and sure enough we woke up to pouring rain. We debated over breakfast and in the end we thought we would take the chance and figured worst case scenario if we couldn't get there due to the weather we could always wander/do a pub crawl around Poole.

We headed into town and caught the bus to Poole, the rain was torrential for the whole journey so it wasn't looking good. Luckily by the time we reached the harbour it had pretty much stopped raining, there was a boat just about to leave so we thought sod it we'll take the chance and jumped on it.

Apart from a couple of brief showers the weather was spot on all day so I'm so glad we took the chance. Last time we visited we walked all the way around the perimeter of the island so this time we walked across the middle, sort of down one side and back up the other. We saw red squirrels which thrilled me beyond measure. 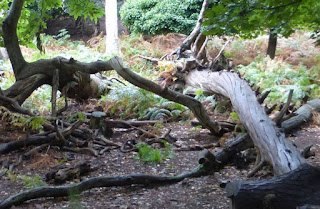 Trust me there is one in this picture!!

We saw so much bird life and some Sika deer. 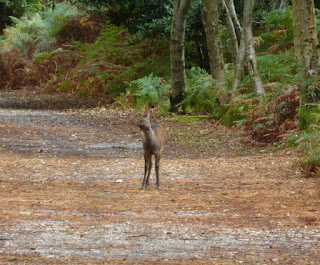 Most fled but this one did not seem in the least bothered by us and as you can see just stood looking at us in a quizzical fashion.

It is so beautiful on the island, I love it there. 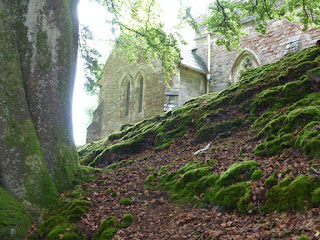 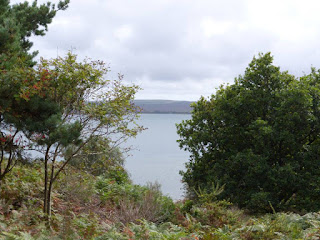 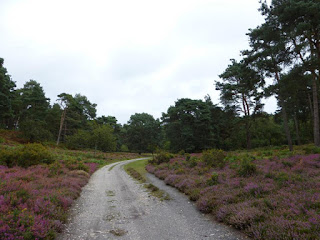 A fantastic way to recharge and unwind.

Saturday was a day of weather extremes, from this 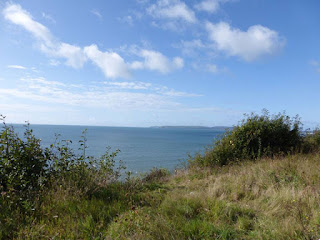 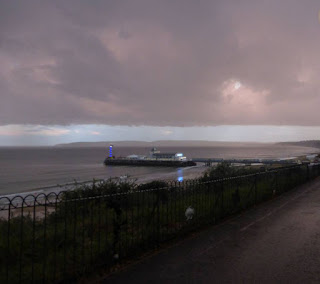 I missed the worst of it catching up with my friend Alison, thankfully we were inside gossiping when all hell broke loose outside. Thunder, lightning, hail and torrential rain! We ambled around Christchurch and I bought one of my few holiday purchases in a charity shop there, a Tara Starlet frock for £9.99 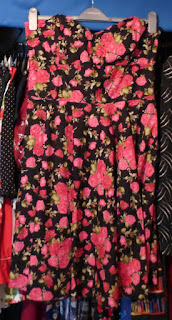 Bargain!
I also bought a crab tealight holder to match the fish one I bought earlier in the year. 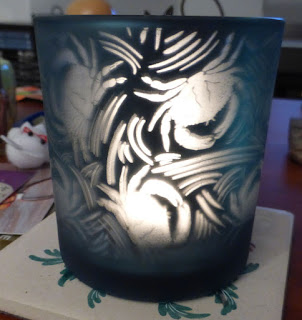 Bournemouth, as ever it's been a joy, here's to next year.

A fab green Voodoo Vixen sundress new with tags from Ebay. I have been stalking it on their website all year but couldn't justify £60 for a sundress, pretty as it was.
I can't even remember how I came across this on Ebay I certainly wasn't looking for it specifically but £22 later it was mine.

Finally as mentioned in my last post I did get around to sorting out my wardrobe(s) I sold some stuff on Ebay, so treated myself to the above and these two Luxulite brooches with some of the money. The lime green one was on sale so I took a punt as I wasn't sure how bright it would be. 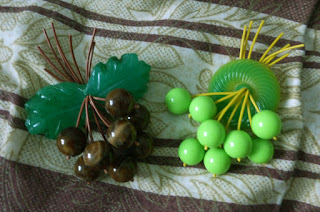 The autumnal one I just could not resist.