A week off work.

So this week I have been signed off work by the doctor with a bad foot. She thinks that I have damaged the tendons but it could be a stress fracture so I am on painkillers and complete rest until it can be x-rayed.

I have had a blissful time catching up on reading 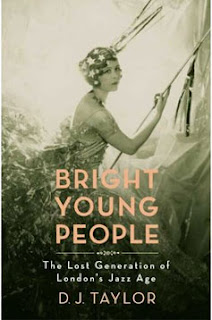 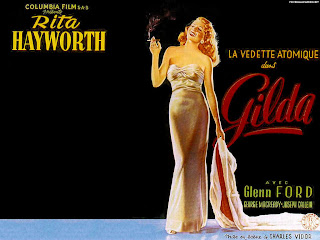 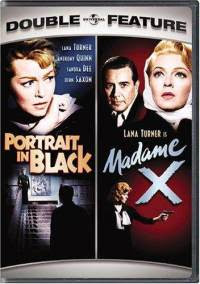 As well as stitching away on projects for Etsy shop. I could get used to this life!
Posted by Miss Magpie at 11:46 2 comments: 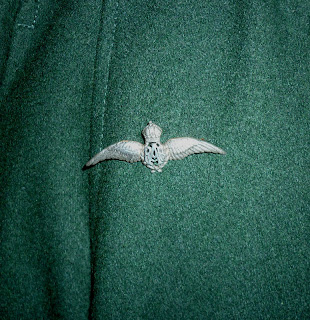 The last two weeks have seen me wearing my silver R.A.F wings with pride in the memory of all those incredible people who were involved in The Battle of Britain, the 70th anniversary of which was last week.
The brooch is a reproduction of the ones pilots gave to their wives/girlfriends in WW2.
There have bee some fantastic and fascinating programmes on television that I have been lapping up. One called Spitfire Women came just as I am part way through the brilliant book of the same title. 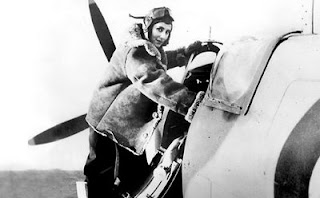 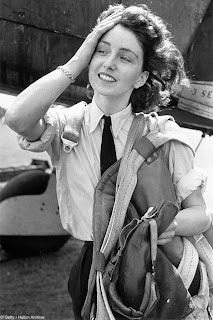 Oh, it just made me want to be one of them so badly! I would love to learn to fly but not modern planes or jets, oh no, for me it would have to be a Spitfire, a Mustang or nothing.
I have to say planes have been a part of my life since it began. My father was in the R.A.F for 50 years and I have been going to air shows since I was a babe in arms, literally! All through my childhood years they were a source of ice creams and not much else and as I got older 'Boooooring' but by my early teens I became interested in the 1940's and WW2 planes in particular and a passion was born. Now just the sound of a merlin engine sends a thrill to my heart and I will run out of the house and look skywards as soon as I hear it. The Imperial War Museum at Duxford is one of my favourite places in the world to go.
So this time has been one to remember all those who served and just what they did for us. When you go to the American Air Museum at Duxford you have to walk a winding path up the slope to the entrance. It has these beautiful glass screens on each side of the pathway, etched with the outlines of American WW2 planes. I remember thinking what a clever design idea it was, to make the long pathway more attractive, then you get to the top and there is a little sign that says 'each plane etched in the glass represents an American airman who took off but never returned' . So you turn and look back at this screen and the sheer number of tiny planes is almost overwhelming. 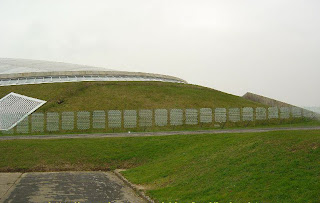 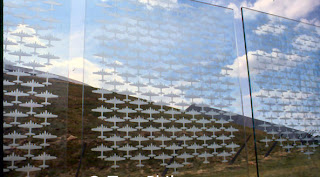 But I digress, this was meant to be about the Battle of Britain. There are many who claim the tide of the war was turned by this epic period of warfare only because Goering changed his fighting tactics, or because of the arrival of the Spitfire, or the use of the Hurricane. Perhaps it was because of the highly experienced Polish airmen who gave up everything to fight for what they believed in, or those incredible women who delivered the planes freeing up more male pilots to fly in combat. Or perhaps the incredible young men who flew mission after mission after mission to the point of exhaustion. I say it was due to them all and I remember and thank them all.
Posted by Miss Magpie at 06:53 No comments:

An Afternoon of Thrift Shopping.

This week I have been on jury duty. I dare not say any more than that cos we aren't allowed to talk about it! lol. Anyway today we reached our verdict and I was released for the rest of the day so on my way home I decided to browse the charity shops in my town.
I managed to find two lovely dresses, I think the blue one may be perfect for a christening I've got coming up soon! 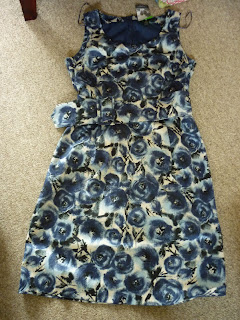 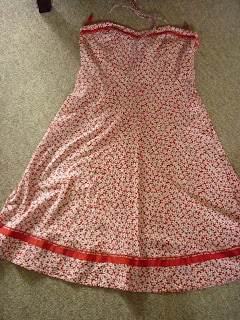 In the same shop I bought this satin shirt for £1.99. I'm not a huge fan of 3/4 length sleeves so I may shorten them before I wear it. 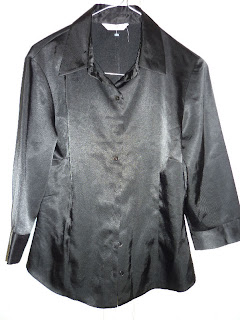 Next I found this sweet little jug for my Mum who is collecting pieces to make up a mismatched tea set. I also got 3 plates for a £1 but I suspect I will end up keeping them! 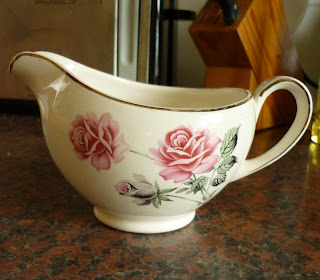 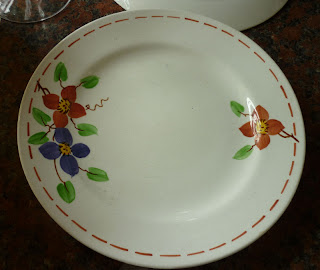 Finally I found these darning silks for 10p each. 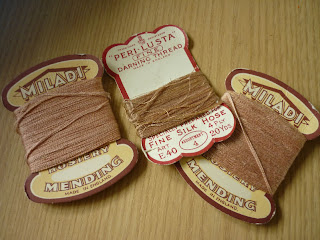 I did buy a vest top in Topshop because I just loved it SO much. 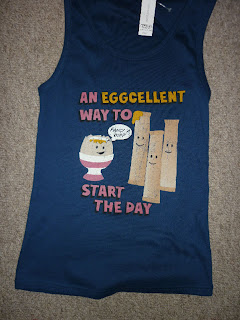 Oh and the necklace obsession thing still goes on as you can see....... 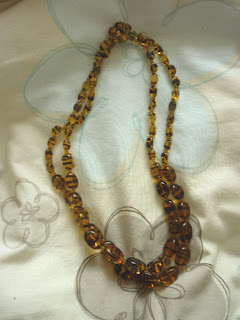 A Visit to Bath. 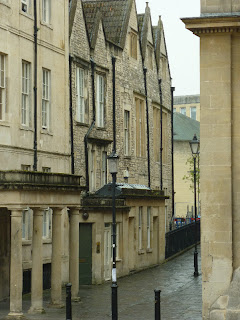 This sunday Himself and I decided to use up 2 of my freebie train tickets and go to Bath. I ADORE Bath, it's such a beautiful city, notwithstanding the fact I am also a die hard Jane Austen fan! (this is the street at the end of Persuasion) 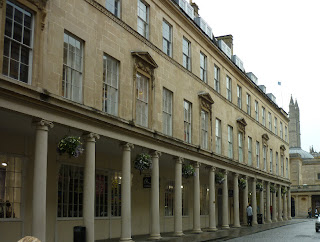 Last year the city had lifesized wooden pigs all painted up and dotted around the city. After much coercion I got Himself to go and see them and we had such a great time that when I saw this year it was lions I had no difficulty talking him into another visit. This year there were over 150 lions so we didn't see all of them but we did see most. 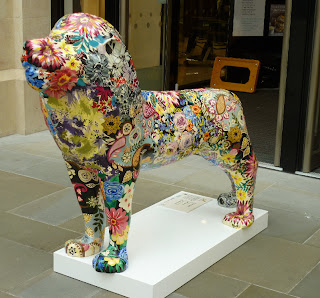 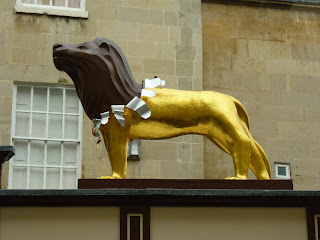 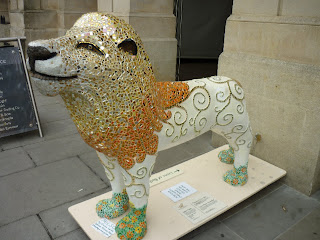 Here are some of my favourites.
We walked around the shops and ambled up and down various streets dodging the rain showers until we reached the Assembly Rooms which also house The Fashion Museum. Last year Himself refused point blank to go in and this year was no different! However he did seem happy with the idea of him going of for an hour or two (to the pub) whilst I went in so that is what we did. Now on the one hand I was very disappointed the 'museum' turns out to actually be just an exhibition within the Assembly Rooms. So you kept seeing signs saying things like 'we have over 2500 handbags in our collection' next to a case of say 20! *so* frustrating when you would just LOVE to see them all. 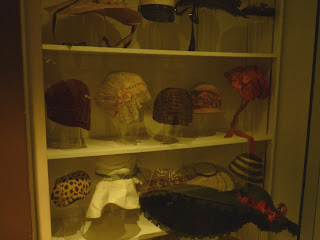 Some of the 1500 or so hats they have!
On the other hand it was well displayed with long and interesting explainations. 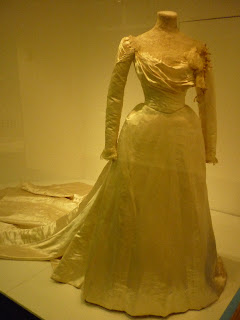 Like the story behind this lovely wedding dress including all the bills and receipts for the whole wedding itself. 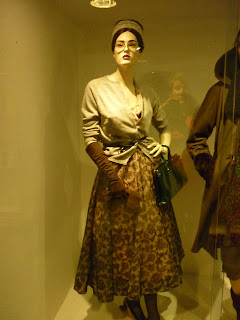 In the final case their predictions for this autumn. I loved the above prediction the best.
On the way out there happened to be a Vintage sale. 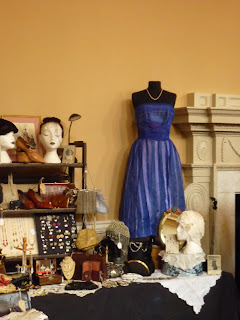 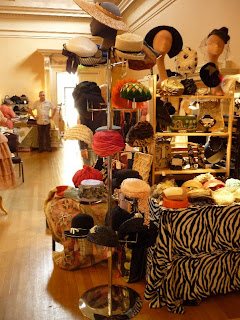 Which was blissful to browse round but sad in that now so many people have jumped on the 'Vintage' is cool bandwagon the prices of a lot of the items are crazy high.
Finally it was time to drag myself away and meet Himself in the pub of his choice for a delicious glass of wine or two before catching the train home.
Posted by Miss Magpie at 10:18 1 comment: