January Purchases, Vintage Sales and a Film or Two

It seems I did do a lot of shopping in January so I have restricted myself in this post to just include the things I bought Lou Lou's January Sale Fair and exciting things like frocks and bags.

I headed into Oxford in the pouring rain to meet my friend Alex (seen here in the foreground examining a plate!) to give Lou Lou's another go. 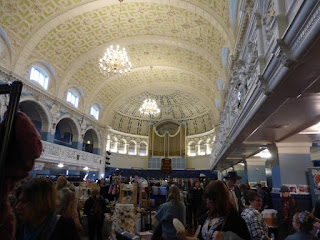 I do find them more expensive than other fairs as a rule but this one was listed as a January Sale and it did make the difference. As well as many rails of everything £5 or £10 overall prices were cheaper too. There were a surprising number of stalls selling just men's wear, albeit mostly 80's & 90's, which was good to see as well as plenty of males busy browsing and shopping rather than just trailing along looking bored.
The sale was billed to start at 12 noon so we got there on the dot as last time it was fairly quiet early on, this time however the queue wrapped right around the upstairs of the town hall and even went back down the stairs down the stairs!
I made my first purchase literally as we stepped in the door, a bin full of handbags with an everything £5 sign above it caught my eye and I dived in purchasing this 80's burgundy Deco style clutch. 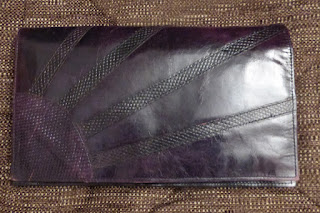 In fact we both made a couple of buys straight away which was worrying because we both had limited cash on us it being the wrong side of payday! It was actually quite good to go to a fair with only a certain amount in your pocket. I deliberated hard over some things and left a few I might have bought under different circumstances without any qualms or regrets. Indeed once we had done a circuit we decided to refuel with tea and cake and mull over a couple of things.
As a one time full on impulse buyer it's a technique I use often now. It's amazing how going back to something after a period of time you realise actually you don't really need it, and if it's gone well it clearly wasn't meant to be.
Before you think it's that easy it's not, I do get mega palpitations/sweats sometimes and have to rush right back and snap something up in a panic but mostly it's good.
I was slightly worried that the 2 bags I had spotted earlier might have gone but they hadn't. I spent quite a while looking them over and trying to decide which one to buy as I couldn't afford both. I toyed with asking if they would do a deal but then I thought come on you have brown bags and in fact you have one very very similar to one of these so in the end my choice was made. 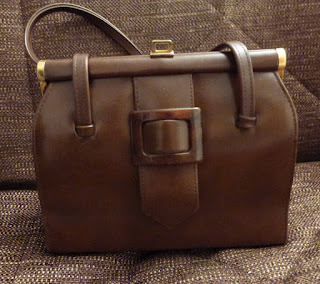 I loved the buckle on the front and it was in great condition if a little grubby, but it's cleaned up beautifully and is currently closed tight with an old sock containing a scoop of biological washing powder in it inside. A nifty little tip another vintage bag collector gave me for getting rid of musty smells in handbags, it works a treat! 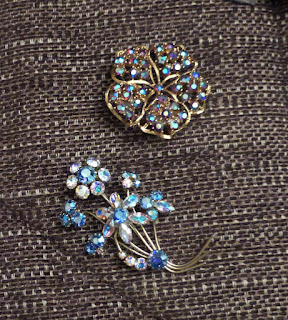 Clearly I'm having a blue moment.
On closer inspection the middle flower of the bottom one was all gunked up with glue where someone had re-fixed the middle stone with a great dollop of the stuff. I spent about 2 hours carefully scrapping and picking it out before gluing the stone back in place again but with a tiny amount this time.
I also bought this compact from the same seller. I'm not bothered by compacts and in fact this is the first vintage one I own, I just loved the pirate ships! (yes I know they aren't really pirate ships I just call any tall ships pirate ships) 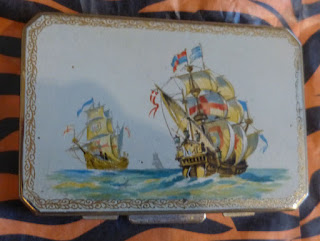 Finally I bought a dress for £5 because I liked the colour and the Deco-y design of the fabric. 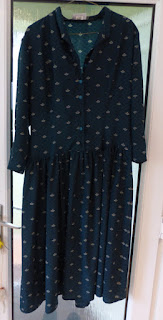 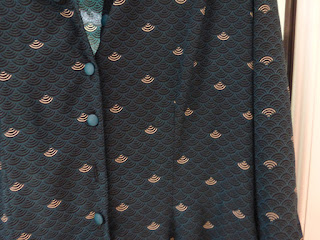 I couldn't figure out why it was hanging lopsided until on closer examination I realised it only had one shoulder pad!
I'm not a fan of them anyway so I'll chop the one that's left out too. I haven't tried it on yet because it's in the wash but I'm hoping the slightly dropped waist will work well with my long torso.

So that was Lou Lou's, a pleasant surprise as it goes. My one oops moment? I spotted an unusual shaped cream 1940's bag for £10 which seemed far to good to be true. On came the specs (which cracked Alex up but I wanted to be able to see it really clearly) so I could do a close inspection, and sure enough it was very dirty and quite badly damaged. I had to sort of step round someone to lean in and put it back in place and doing so I suddenly realised I had inadvertently stepped on and pulverized the stall holder's packet of fags which were in a carrier bag under the clothes rail. Lets just say I beat a hasty retreat before anyone noticed!

I've also been to the cinema twice this month, once to see Coco which is just wonderful and well worth seeing, I enjoyed every minute. 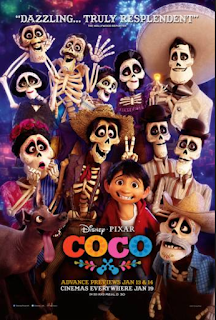 As well as the final Maze Runner film. 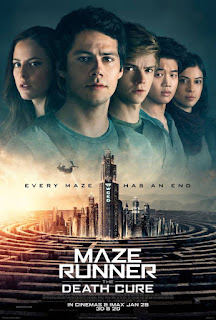 It's been a long time in between films because one of the leading actors was badly injured whilst filming and they delayed indefinitely until he recovered. The delay meant that even though there's only meant to be 6 months between this one and the last film in terms of the story, most of the adolescent cast had grown up and filled out in dramatic fashion between films! Which was a little disconcerting.
I really enjoyed it despite the zombies (I HATE zombie films) in fact I really enjoyed all three films despite them not being the sort of thing I would have chosen to see (I got to see the first 2 for free).

Finally just in case you have been champing at the bit to see my January round up here goes!
I will start by saying I have indeed stayed true to my resolution of;

1. Opening parcels as soon as they arrive. (usually they sit for days or weeks even, until I get round to it)

2. Trying things on as soon as I open the parcel (shamefully items lie about for weeks until I can be arsed to try them on!)

3. Returning things straight away if they do not fit or look right. (usually by the time I try things on it way too late to return them if they are wrong in any way.)

First up I did crack and dip my toe into Collectif again because they had incredible reductions with some items over 75% off. I did sort of cheat in that I only ordered styles I know have fit me in the past. I did my usual 3 to make the postage worth while and what do you know? 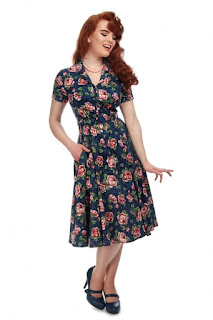 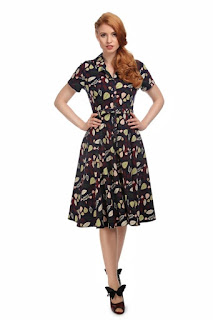 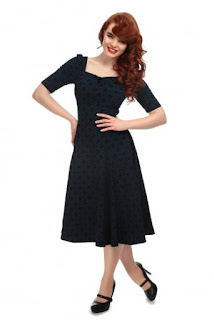 They all bloody well fitted - Result!

Next I bought two dresses from Dolly and Dotty another company who's sizing is completely mental. Two dresses , exactly same style, exactly same size just different fabric. One fitted perfectly the other was way too small!?! So I packed it back up then and there and mailed it back the same day. Go me. 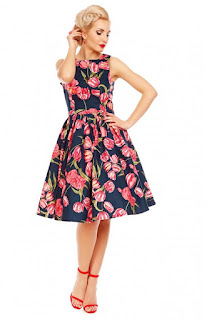 This is the one that fitted. I must admit if it wouldn't have been stupidly cheap I would have left it for being too pink, but I really did love the parrot tulip print and it's cerise enough for me to live with it.

Final online shop purchase was from the new Hell Bunny collection with a 20% off and free postage voucher. 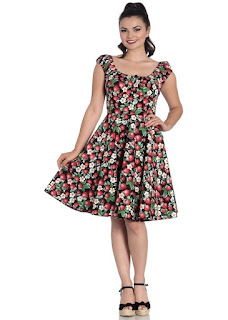 How could I not? I mean it's strawberries so it had to be done! It's described as a midi dress which is random because even on the model it's just on the knee and it's certainly above the knee on me. 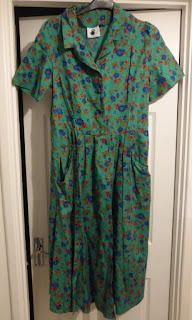 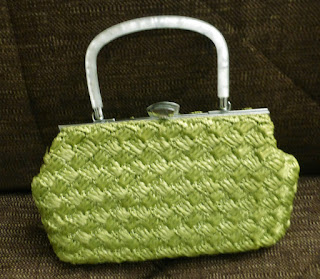 I just could not resist this in any way shape or form and quite frankly nor would I want too. It fills my heart with joy.