Back in the Saddle.

Hello all, firstly I would like to say thank you for the lovely comments on my last post I really appreciated them.
So we are in the new house and I’m happy to report my Pollyanna mojo seems to be returning, hopefully no more downbeat blog posts, if nothing else I’ll have no readers left if I go on that way! (I hemorrhaged followers with my last post.)
As it goes the moving itself was not as bad as I thought it might be. The new house is just a couple of streets away from our old place so we did quite a few runs with cars loaded with boxes meaning it only took one day with a hired van for the bigger stuff. We had Nephew Number One (21) his girlfriend(19) and her brother(17) helping us so we did pretty well. They flagged a bit by lunch time but once we had all refueled on fish and chips were back too with gusto.
I did have to laugh at the fact that whilst they headed off out for a night on the town (fortified with the alcohol we bribed them with to help us move.) Himself and I just put our bed together and collapsed pathetically into it absolutely exhausted. Oh the energy of youth!

I’m happy to say, I’m not hating the new house quite as much as I was before we moved in and I’m not missing the old place anywhere near as much as I thought I would. I think discovering the old house had rising damp to add to all the other issues going on helps. Let’s just say moving furniture and discovering great patches of wet on the walls and mould round the bottom of most of your furniture is not going to endear you.

Himself managed to add to my stress levels mightily by leaving his packing until literally the night before, Saturday morning we were loading the van and he was still packing!?! Thankfully we did get it all done, Though I think the builder over the back regretted his offer to us to put 'some' rubbish in his skip when we pretty much filled it, ooopps.

First things to be unpacked were my clothes and handbags, but it was actually getting my books in order on the bookcases that made me feel more at home. Proving you can take the girl out of the library but not the librarian out of the girl.

We are still figuring out what is going to go where, and it’s still pretty mad and messy but we are getting there. The de-cluttering continues as well and long may it.
Strangely I found all my ornaments and those kinds of bits and pieces the hardest thing to be objective about, so I have decided not to unpack any of those boxes for at least 3 or 4 months. I’m hoping by then I will be able to sort and reject in a more logical and sensible fashion. Here’s hoping so anyway!!

The new house has a pretty big and frankly disastrously overgrown garden. Half of me is itching to crack on, but the sensible half is reigning me in. We are only there short term and as much building work is planned once we have gone (a new build and or extension) there really is no point to do more than tidy up a bit.
You can tell the old lady who was there before was a very keen gardener at one time. You can see where there would have been flowerbeds and a lawn, separated from a small orchard and a vegetable patch at the bottom. According to my Mum, who is one herself,  the lady also must have been a flower arranger as most of the shrubs, though badly overgrown, are absolute staples of the art.

I feel I should point out that the last coupe, of months weren’t all doom and gloom. One thing I would like to mention is the 'Undressed - A Brief History of Underwear' exhibition at the V&A that Soo and I went to visit at the beginning of July.

I will confess when we booked the tickets it was more because we thought it would be a giggle but I have to say I thoroughly enjoyed it and learned a lot. Another excellently curated and informative exhibition from the V&A that I would highly recommend.

We also went to see Adam Ant on the anniversary tour of the Kings of the Wild Frontier album who was absolutely amazing live and just what I needed, to let my hair down and forget my worries for a few hours.

You'll be delighted to know the disaster dresses continue as well.

1. Disaster dress moving discovery. So I bought this dress in the sales a couple of years back on a sales shopping trip in Reading because I thought it was pretty. 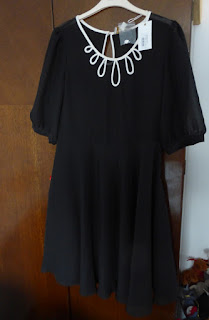 It didn’t quite fit and I couldn’t be arsed to trek back to Reading to return it so I hung it on the back of the door where it languished ever since (because of course instead of getting any thinner, I just got fatter)
Obviously on unpacking it I figured I would try it on in the hopes that after my stress induced weight loss it would now fit and I could add another cute dress to my collection.
As it goes it did fit but dear god it looks absolutely hideous on! Good grief. I'll be listing it on Ebay in the very near future, alongside

2. Disaster dress two. Remember the teapot & teacup print dress I just HAD to buy because of it's amazing print? That I then had fits about whether I would wear it because that amazing print was very pink? 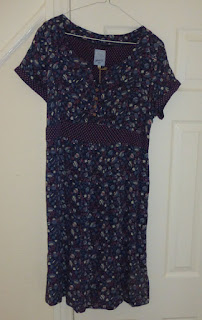 Well it seems I really should have been thinking about whether it actually looked any good on, because as it goes it also looks awful on me. I have worn it a couple of times being bloody minded but it just looks wrong and I feel wrong in it, so lesson learnt, if you do find a lovely print frock TRY IT ON FIRST before you buy!