Life Has a Way

of coming at you when you least expect it.

I had a blog post planned, I hadn't drafted it yet but I'd done the pictures and was ready to go when the universe decided to test me yet again or something like that. I was ploughing on with my Cabot Trail walk and about 100 miles into it's 186 mile distance, walking every other evening for about 4-5 mikles and with a longer walk at the weekend.

We headed out after dinner on the 18th Feb, frankly I was tired and didn't really want to go at all but Himself encouraged me out and when we hit the 3 and a half mile point he asked if I wanted to carry on the longer route or just go the quick way home. Every ounce of my being said the short way, so I deliberately said no the long way because this was meant to be about losing weight and getting fit and you don't do that cutting corners, and this was where I came unstuck. I have gone through all the what ifs since that night because that's human nature but what will be will be and what ifs can't change it.

Just over a mile from home and going at a cracking pace because I just wanted to get home, I tripped over a paving slab and went flying, literally. As I still have a frozen shoulder I couldn't put my hand out to save myself so my full, and not inconsiderable weight, was taken by my left shoulder. I felt and heard it crack so I knew instantly I had done something bad. I managed to get up and Himself thought maybe it was fine because I could move my hand, but I knew it wasn't. He asked if I wanted to call an ambulance or walk home and I chose to walk home, I just wanted to get into the house. A few friends have said 'you must have been in agony' but no the adrenaline had kicked in so I couldn't really feel a thing. We got in and called 111, the girl there was great ran through a load of questions to establish I wasn't in shock then told me to take a couple of paracetamol and arranged for a doctor to call me within half an hour. Thankfully whilst I waited for the call I had the foresight to take of my rings on that hand, I wouldn't have got them off if I had left it any longer. The doctor called within 15 minutes decided something was broken and booked me an appointment at A&E. In these covid times you can't just rock up unannounced. My awesome brother agreed to drive me to the hospital even though by this point it was 10.30 at night.

I have to say I was super impressed with how things were run, so quick and efficient. I checked in at one window then was directed to another where I was triaged by a nurse. Knowing that x-rays would be required they sent me for those straight away rather than waiting for the doctor to see me first. So by the time I did see the doctor the x-rays were there and confirmed I'd broken my shoulder. Well in fact they thought I had cracked it and more worryingly chipped the cuff bone. Typically I'm allergic to codeine so they couldn't give me anything stronger than ibuprofen and a full arm sling, then I was sent off to reception to book an appointment at the trauma clinic for a week's time to see what was what and whether I would need surgery. I was back in the house by 1am!

As you can imagine I had a shit night due to the shock and the pain setting in. The next morning I rung our doctor's surgery without much hope as it has always been near impossible to even get through, let alone get an appointment since well before covid and lockdowns. The angels must have been on my side because I got straight through, I was almost incoherent with shock but they did get a dr to call me back and after discussing options, which are not many when you can't take any form of opiate, he prescribed a stronger form of ibuprofen alternated with paracetamol.

My visit to the trauma clinic a week later established I had definitely broken the bone rather than cracked it but apparently if you are going to break a bone mine is the best kind to have, neat and with minimal displacement. More importantly I had not chipped the rotator cuff which meant there was no need for surgery or a cast, gravity and immobilization are all that is required. The hospital had put me in the wrong kind of sling but thankfully it hadn't done any harm so I was re-slinged and sent on my way with the strict instruction of NO lifting of any weight with that arm. I have to go back after 6 weeks for x-rays to make sure all is doing what it should.

It's been 4 weeks. Physically most of the bruising has gone and there is only a little swelling left, but in terms of my mental well being it's been an interesting time. I have always considered myself a chilled but ultimately lazy person, anyone who has read my blog for a while will know this as I say it often enough. I now know this is not actually the case. I may not charge about sporting and I may like to loaf in front of the tv, but suddenly finding yourself incapacitated makes you realise actually I'm always doing something. The absolute and all consuming angry frustration at not being able to do things took me by surprise. Each day that passed there were more and yet more things to add to the list of things I now couldn't do and it drove me MAD! The fact that this is going to be my life for the foreseeable future makes me want to howl. From not being able to file a broken nail or put on deodorant (you have a go at rolling deodorant under the same armpit as the hand holding the tube) to the fact I had a compost delivery and seeds to plant and a rockery to build. I also can't do any of the crafts I love. It's bloody hard.

I have started exercises from the physio, don't get me started on THAT shit show. The NHS has outsourced it's physio and they don't see you for appointments anymore, I have had a phone consultation and been emailed an exercise sheet. They hadn't seen my records and couldn't even spell my name right! I mean I would have thought that at least would have been there in front of them... I have to call them back after my follow up consultation, tell them what was said  and they will email me another exercise sheet. Frankly the one they sent is so confusing I can't actually figure out what I am meant to be doing. Luckily the universty's occupational health team have been on hand and sent me some much better stuff which I am working from.

So at the moment life is about huge loads of frustration, occasional bouts of pain and occasional bouts of panic that what if things aren't healing as they should. I'm still having to sleep upright which is crap because basically I don't really sleep, I'm averaging a couple of hours a night at most, so I'm accruing a massive sleep debt which doesn't help the mental well being. But there are little moments of victory. This morning I was able to put on deodorant and last night I was able to paint my nails.

This afternoon I go for my covid jab which I'm delighted about even though I'm not looking forward to having both arms aching for a few hours! Fingers crossed I don't have a reaction.

Anyway that's me. The next few months are going to be a hill to climb. Bones take 6-12 weeks to heal then you have to get mobility back. The shoulder is the worst joint for seizing up apparently so at best I'm looking at 3-4 month at worst a year to 18 months. It's going to be a long and rocky road. Poor Himself is having to do everything and I'm not helping by being a bad patient.

The Sunday before this happened I spent a blissful day cleaning my latest handbag purchases so I'll leave you with them. 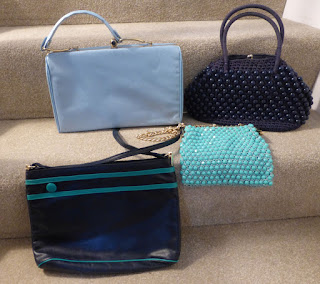 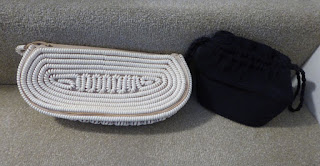 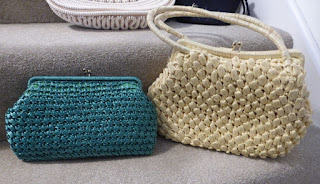 The blue ones were a job lot and the telephone cord bag was a lucky spot at a fraction of the cost they usually sell for. Thank god for the joy that is handbags.
Posted by Miss Magpie at 05:58 5 comments: