Flights of Fancy and a Little Shopping.

I hope you have all had a magnificent Easter so far? The weather has certainly thrown everything at us here in the last 3 days, sun, snow, hail wind and rain but sadly not the thunder and lightning they have had in London. I do love a good storm!

Magpie Towers has been a pestilent plague pit for the last week with both of us full of a post holiday cold. I can't really grumble it's the first one I've had for a long time and thankfully it hasn't lasted long or driven me to take to my bed. Which meant on Good Friday I was up and out for the day despite the sniffles.

For my brother's big birthday last year I was a bit stumped because he's bloody hard to buy gifts for at the best of times. I finally decided to take a punt on an experience day that came highly recommended by Soo, and bought him a Falconry Experience at a local centre. There were a couple of different ones you could choose from but I decided to go with hawks.

It's taken him nearly a year to get round to using the voucher but finally we headed off on the one gorgeous day of the long weekend. We got there in time to have a look round

(Twoo was having a much deserved rest and digest after having flown in the 11.30 display!)

and then watch the 1.30 display. Which featured a stunning 4 yellow tailed kites and Ronnie the turkey vulture. 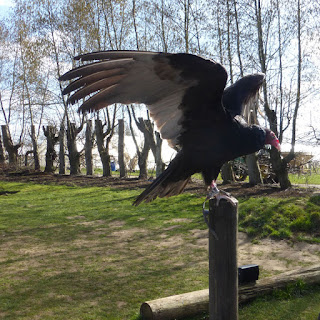 This is very much a get right in it sort of display with the birds flown literally right over your heads and landing right next to you as you can see.

Nearly all the birds here have been hand reared from eggs, the owners have a license to hatch and rear chicks from stolen eggs that have been retrieved as well a to buy eggs legitimately. They also take birds where the owners can no longer look after them.

It was interesting to hear that kept well fed and properly exercised in captivity these birds can live for up to 5 times their lifetime in the wild. I don't particularly feel comfortable to see animals or birds in cages but I guess if the emphasis is on the well fed, happy and helping conservation I see the need.

Apparently the oldest bird of prey in a centre is a golden eagle who reached the ripe old age of 86! There's a goal a lot of us would happily wish to reach.

It was time for my brother to get hands on. He was shown how to hold the birds properly and then we were given a private tour with a bit more information about some of the species they keep. I have to say I did particularly like Loki the raven, very unusual to see a raven and yes they do use him in displays! though apparently he only likes to do shows in the summer and won't cooperate if he doesn't want too. He had all sorts of equipment and toys to play with, ravens being very intelligent birds they get bored easily.
We didn't get to see it, but his favourite trick is to hang himself upside down by his feet from the netting wings akimbo terrifying the unsuspecting public as they walk around the corner, which made me like him even more.

After this my brother got to fly a couple of birds 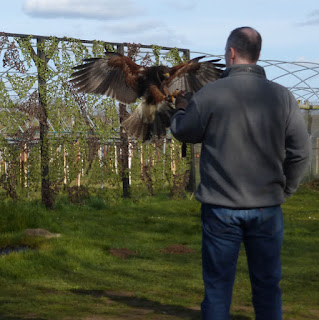 before the 3.30pm display began, we stayed for that one too.
Final bird of the day was this gorgeous owl who's name I have forgotten! 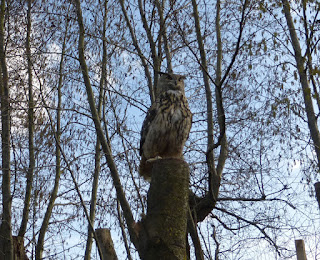 All in all an amazing, fascinating and thoroughly enjoyable experience, though I was gasping for a cup of tea by the time it was all over, but then what's new??

I shall end with my latest internet purchases. I mean what else does one do when one is ill? 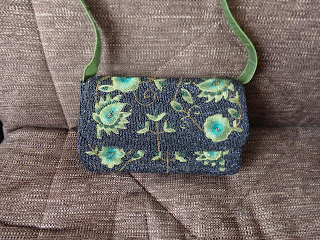 This very pretty beaded and embroidered bag I have stalked on Ebay for a while. It was listed as 'vintage' but I wasn't convinced and I was quite right not to be, it's about as vintage as last night's dinner.

It was listed for much more than I was willing to pay, or anyone else it would seem because it didn't sell. The seller kept relisting and relisting it. They did drop the price a bit but not enough to tempt me so in the end I deleted it from my watch list.

When I was browsing last week, there it was again and this time at a much more realistic price, so I went for it.

Next up is a bargain leather bag I bought absolutely ages ago but keep forgetting to share, but now I shall for it deserves it's day in the sun too. 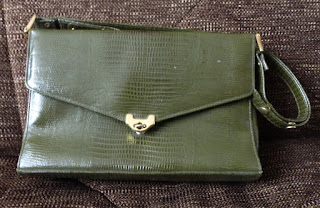 Finally an absolute stunner and another demonstration of why it is worth checking misspellings if you are looking for something in particular. 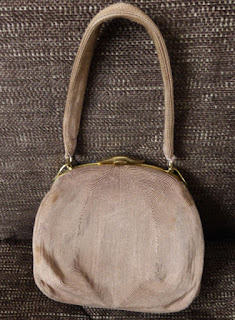 This gorgeous little brown Corde bag was only £6 because the seller had spelt the name wrong, what an absolute belter of a bargain and a belter of a bag. I am one happy bunny.

How about a frock or two? both Hell Bunny (who else?) and both under £20. Bargains that definitely made my cold more managable. 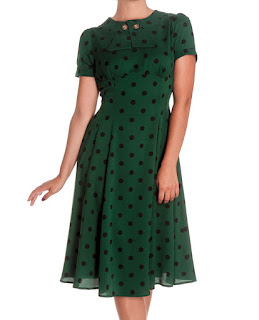 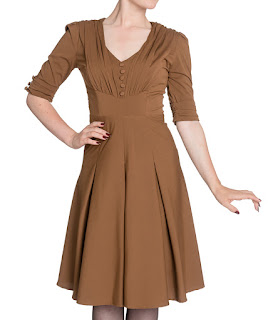 Travels in The North and a Vintage Fair.

I hope you are sitting down for this but Himself and I have actually been on holiday!?! It seems miracles do happen sometimes.

It's been 5 long years since we last went to Newcastle but when 2 birthday invitations arrived right when we were looking for a vacation destination, tickets were firmly booked. It was lovely to be back, when we finally got there!

The plan was to catch a direct train from Oxford on Saturday morning to arrive about 3pm, check in the hotel, have a couple of hours to unpack etc then get ready and head out. Instead we had just settled into the sandwiches when the driver announced that Sheffield station was shut so our train was terminating at Birmingham.
We arrived at Birmingham and for 40 minutes hung around with about 10 million other people, all trying to head North, watching train after train being cancelled. *sigh*

In the end we were advised our best shot at getting to Newcastle was to head to Manchester and see what we could catch from there.

So that is what we did.

From Manchester we were advised to head to York, so we off we went to York with about 20 million other people who were all trying to travel North. We arrived at York and finally, after a couple more cancellations, a train for Newcastle was announced, it was delayed, but it would arrive!

We piled onto that with the 50 million other people who were trying to get to Newcastle and spent the whole journey wedged uncomfortably against the train doors, the only consolation was when we finally arrived in Newcastle we were the first off the train.

All in all this meant we arrived at our hotel with just 40 minutes to check in, change and dash back out. Good grief.

Anyway we had a bloody fab night, despite being a bit fraught and a tad knackered The night also ended with the added frisson of the night bus back to Newcastle.

Sunday dawned gorgeous and sunny so we headed out to the Quayside for a mooch alongside the Tyne before meeting friends for lunch. 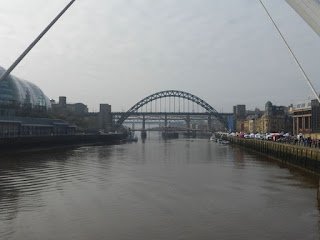 I was delighted to find the added bonus of a food & flea market to browse. There I bought myself a vintage Rupert annual for the bargain price of £4 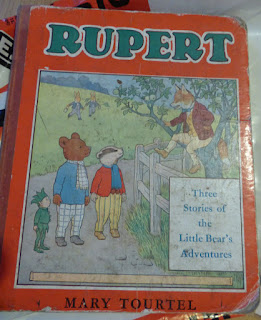 Of course I didn't have a bag with me so had to spend the rest of the day carrying it under my arm.
The sight of which made a busker break into "Rupert, Rupert The Bear, everyone knows his name"  much to the amusement of everyone else.

We ate lunch sitting outside in the sun before dropping into Wetherspoons for a quick drink before heading in our different directions. We finally staggered out at 9.30pm *cough*

We had already planned to head over to South Shields on Tuesday so spent Monday reacquainting ourselves with Newcastle and taking artsy fartsy pictures. 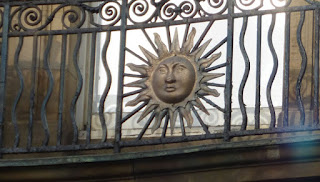 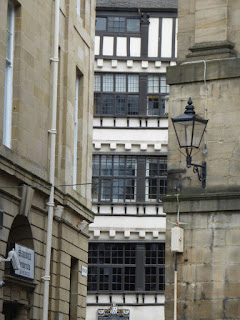 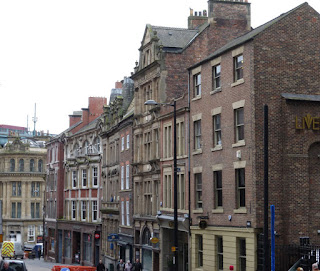 There really are some gorgeous buildings, sadly many were empty and in gentile decay. 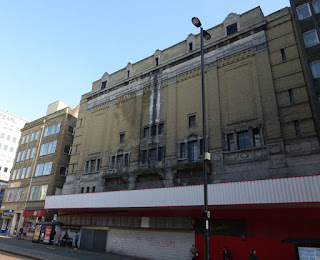 Like the cinema above which is where Himself first saw Star Wars, it was sad to see it it still boarded up as it had been on our last visit 5 years ago. Another gorgeous sunny spring day, so much so Himself had to go and buy sunglasses!

We ate a delicious dinner at Harry's Bar opposite the theatre before meeting more friends for a drink. We headed back to our hotel along the quayside after another great night out. 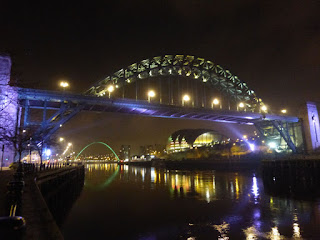 South Shields is not somewhere I would hurry back to if I'm honest.Bleak is the only word to describe it. 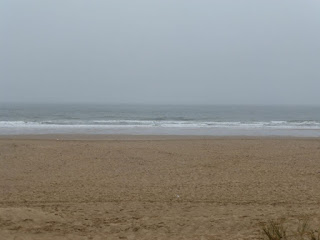 However I was determined to go to the beach despite the bitterly cold wind coming in off the sea. I think we lasted about half an hour before admitting defeat and going to buy some chips.

Wednesday was the day of the second party so after a walk and a big lunch I gave my poor liver another battering.

I had done a bit of research before I left but can only conclude Newcastle is a wee bit crap when it comes to vintage. Two of the shops mentioned on Google had closed, 2 just didn't seem to exist at all and one was just men's clothes. Bah, so I didn't get to buy any lovely goodies, I was hoping for at least one handbag, but it was not to be.

At least I got to go to a vintage fair with Soo today to make up for it.

Bizarrely set in the upstairs restaurant of an out of town garden centre it was small compared to many I've been too. 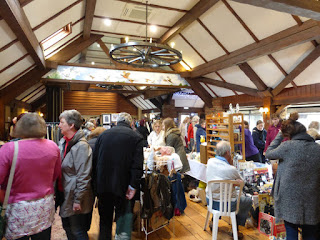 It also meant you got an interesting mixture of families and pensioners as well as the usual vintage fans. 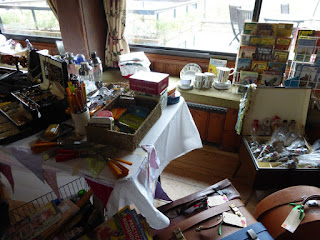 Soo was a vintage fair virgin but thoroughly enjoyed popping her cherry. We both bought some goodies.
For me 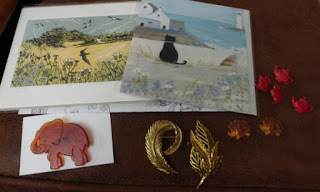 The elephant brooch was £6 and the two gold tone ones were £1 for both! (The cards and super cute buttons came from the nearby town where we headed for lunch.) 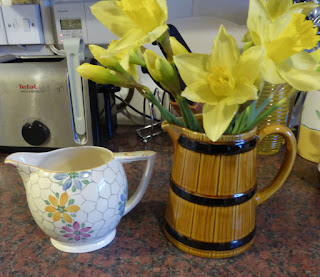 The floral jug was £4 and the quirky barrel one £1.99, I just had to put daffs in it. (yeah that's my toaster in the background! I'm all about classy settings me.)

They are knocking down a shopping centre in Oxford, to build a bigger and better one of course, I picked these up in the New Look closing down sale. 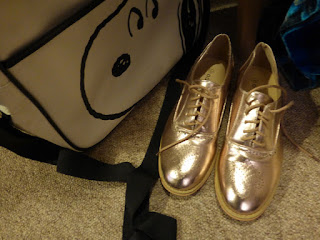 Well how could I not?