Ne'er Cast A Clout til May be Out

Well in my case a blog post. May came and went in a mad whirl of stresses at work, and horrors in the world outside of it, a sobering month indeed.

Even the weather didn't seem to know what to do and we went from waking up to a ground frost to nearly 30 degrees all in the same week!?!
This meant starting the week with the winter weight duvet and ending it going out and buying a new summer weight one because I could NOT find ours anywhere!
Ironic because this house has no storage and as Himself pointed out we moved in August so must have had it on the bed at the time we moved.....
Anyway Argos had a deal on and we now have one of those 3 in 1 duvets, a 4.5 tog and a 9 tog that can be clipped together to make a 13.5.
Of course I found our original summer duvet 2 days later as you do, it was in with the towels, no I have no idea why either.

The last Bank Holiday weekend started with the annual work clothes buying trip for Himself, an event always fraught with danger as it combines two of his most hated things, Shopping and People. Thankfully it passed with only one small incident. Trousers, shirts and sundries were purchased, trainers were not (my birthday present to Him).
I've learnt to read the signs and quickly realised limits had been reached so whisked us out of Sports Direct and into Wetherspoons where beer, wine & bowls of chips worked their restorative magic.

The next day instead of going for a walk we met my Mum at Dad's care home with ice creams and Star Wars Rogue One both of which Dad thoroughly enjoyed. We were back there on the Monday as it was my brother's birthday so we all coincided there for a glass of something.

It was also the weekend that we found we had a leak in the kitchen. Thankfully this turned out to be one of the washing machine pipes I was worried they were going to have to try and get behind the cupboards under the sink. For some reason I found the whole thing extremely stressful, just where I'm at mentally at the moment I think.

I had my hair cut and coloured which was slightly unnerving as the Sister in Law is currently suffering from vertigo! She was telling me all about how ill she had been, how dizzy she feels and how she often can't see straight all whilst weilding her hairdressers scissors! It's maybe a tad shorter than I had expected but otherwise pretty damn good considering the circumstances.

We went to see the new Pirates of the Caribbean film. I really enjoyed it, Himself didn't and actually fell asleep! Oh well.

Soo came over for a catch up last Saturday. It's been an age since we have been out, well it felt like it anyway. We just mooched into town and had some lunch out. The Chazzas were absolutely rubbish which seems to be the way at the moment. I bought a scarf and that was it.

May purchases;
Some black wide leg exercise pants and a navy and red cherry print vest top from Sainsbury's when they had their 25% clothing sale on. I have the trousers already in grey and love them. Not that we have been able to get to the park much with all the rain we have been having. the downside of exercising outside.
Whilst on the work clothes purchasing trip. I bought 2 pairs of black capri pants, one casual look pair and one more smart for work. Two gypsy tops one black embroidered and one red & white gingham as well as a checked shirt.
I couldn't be arsed to queue up and use the fitting room so of course I got home to find trousers that were meant to be the same size, were actually one pair slightly too big, and one pair I could barely fasten. *sigh* They got returned along with the black gypsy top which was way too short on me.
I also bought a pair of sliver loafers reduced to £5 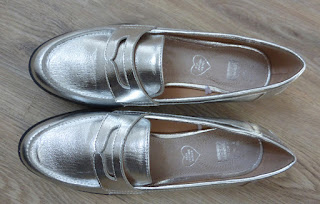 I did a bit of online frock buying via some of those 'it's a bank holiday have some money off' emails. 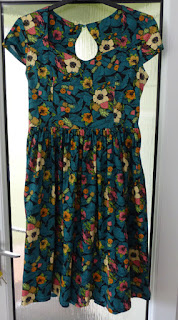 A Dancing Days floral dress, which is very loud but I love it.

Now you know me and a novelty print, I very rarely say no. I couldn't resist this one even though as Himself quite rightly pointed out the colour is far too light for me. 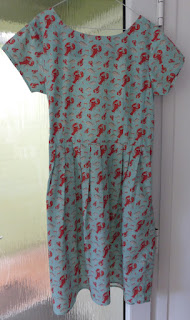 But lobsters and prawns and fishies, what's not to like?? 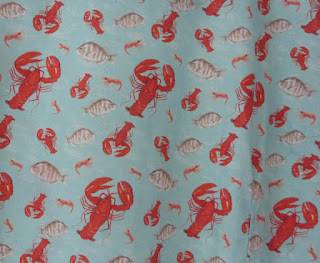 It looks fine with a stronger coloured cardigan so it's staying.

This black and white summer dress was a charity shop purchase for £3 earlier in the month.

Talking of earlier purchases. Remember the Voodoo Vixen frock I stalked for months on end until it went into the sales? 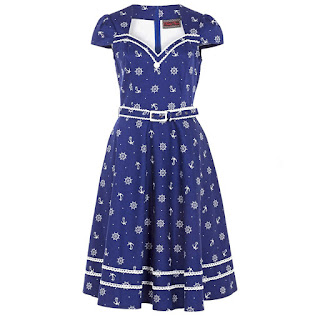 well I finally wore it and lets just say good grief the sleeves.......Clearly my dress had gained a lot of extra love in the sleeve department than the one in the picture here. 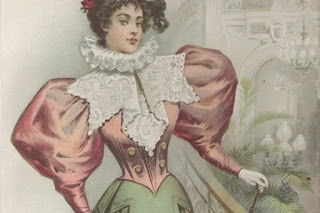 I kid you not!

This is where having a seamstress for a Mother is a marvelous thing. She tutted and exclaimed, removed the sleeves, took some of the extra fabric out, pinned them back in made me try it on, adjusted them a bit and returned it to me with the cute little cap sleeves I was expecting in the first place.What a star.

Finally I broke the bag buying drought with this 1970's moss green Clarks number. It's in great condition but smells terrible so is currently airing outside before I try a good clean and some bicarb in it. 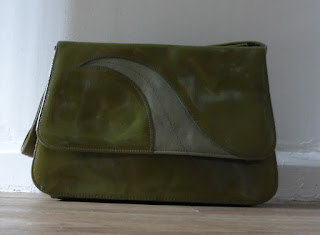 Finally whilst Himself was looking at stuff in H&M I browsed their mini homewares section and just had to buy this lion juice glass to go with the Tropicana one we already have. 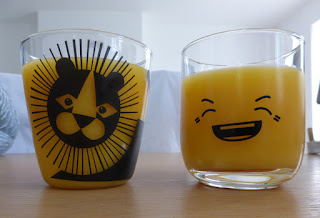 Right I'm off to sort out my shoes to make room for my new ones. It has to be said I do have a bit of a thing for sparkly shoes, a pair for every day of the week it seems. 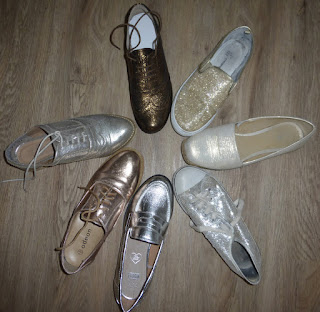