Well I had hoped to at least blog monthly but here I am in October and 2 months behind, I can't believe I used to blog weekly at one time!

As usual it's work, we have too many students, like 30 too many. As with many other university courses all over the country and even the world, these unusual times have found us oversubscribed. You always over offer because people go elsewhere, drop out etc but this year has been a strange year in more ways than a pandemic. They tried everything to reduce the numbers, even offering money to defer but nope they all wanted to come.

So we have been frantically trying to adjust class sizes to fit them all in and ensure they can all be taught. I said we there. This is usually the job of the programmes team, I work in admissions and recruitment so ordinarily once they are here the students are no longer my worry, but the programmes team are drastically short staffed, so I have been seconded to help out. I use the word seconded very loosely here, actually I'm still expected to do my own job as well the extra so to say it's been a crazy time would be an understatement. There was some logic behind me agreeing to do this, but I'm not going to go into that on a public platform or at least not yet...

Anyway August was a pretty cold and miserable month, I felt sorry for the school kids this year they had such a crap summer break. I met some friends for lunch at the start of the month and we tried sitting outside the restaurant but soon gave up and scuttled inside!

Mid month I went to Birmingham with my friend Charlotte to visit Alex. She has been working for Birmingham City University and had finally been asked to go into the office in person a couple of months before which meant committing and moving to Birmingham. She had done a couch to 5k urban art run not long before and as none of us wanted to be in the horribly crowded city centre she offered to retrace it as a walk.

The weather was grey and miserably and turned to rain but it didn't dampen our enjoyment one tiny bit. The art work on the canal paths and streets around them was stunning and I've struggled to narrow this down to just a few pictures for the blog! 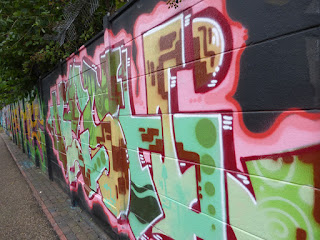 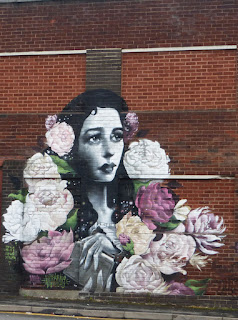 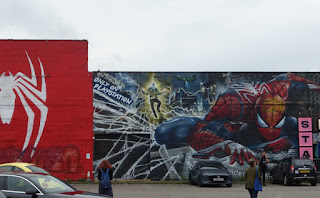 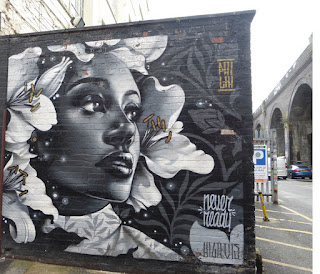 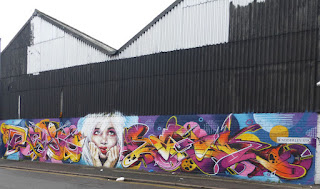 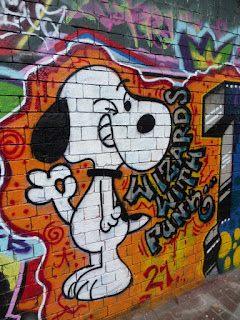 Weirdly the whole time we were walking round the streets under the railway arches all you could hear was pounding music. Turns out it was from various nightclubs, all open and doing a roaring trade judging by the queues outside. I guess people were making up for lost time? but I can't imagine going clubbing at 11am even if it was a Saturday!

We headed to the Custard Factory for pizza at Baked in Stone. It certainly deserves it's fantastic reputation the food was amazing and I'd highly recommend it if you want great pizza.

I know it's been a fair while since I was last in this part of Birmingham for a blogger meet up guided by the one and only Vix, but I was sad to see that not a single vintage shop remains at the Custard Factory now. In fact the only one we could find nearby was Cow.

It was properly raining by now so we decided to try and find somewhere to have a drink but eventually ended up back in the city centre and cutting through the Bullring. It was horrifically busy, like Oxford on the last Saturday before Christmas. People everywhere pushing and shoving and not a soul wearing a face mask! Just horrible. Other than that it was such a fab day out and so lovely to catch up with friends and eat out. I'm happy to slowly start easing back into things but that level of risk was a step too far for me, no wonder the numbers are going up again.

On the Bank holiday at the end of August Mum and I ventured out to the Stonor Park Craft Fair. Last year was the first time we haven't been in the best part of 30 years, not that it really counts because it was cancelled, but still. The tickets were limited and you had to show either your double vaccination card or a negative lateral flow test and were advised to wear a mask in the tents which we did, we also chose to go on the Friday as we thought it would be quieter. There weren't as many stalls as in past years, in fact there was one whole tent less, and a lot of it seemed to be jewellery, but never the less it was lovely just to go and browse. I bought this crab stamp to go on my nautical themed window sill and a gorgeous labradorite pendant which I will share next time as I have just bought a chain for it. 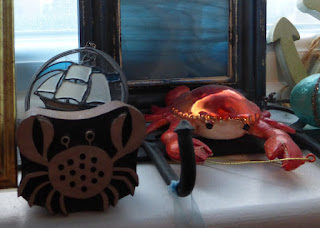 After a good browse we headed back over to Mum's village and had lunch at a cafe on the small industrial estate on the outskirts. It's one of those hidden gems that all the locals know about, serving huge portions of delicious homemade British classics like cottage pie.
I'd stayed the night with Mum on Thursday and got to sample the joys of her air fryer in the shape of delicious salmon steaks. She is a complete convert after getting one for Christmas and says she never uses her oven any more!
On the way home we detoured towards the town of Abingdon where there was a sunflower field on the outskirts grownfor charity  so all proceeds from visitors go to a local hospice. 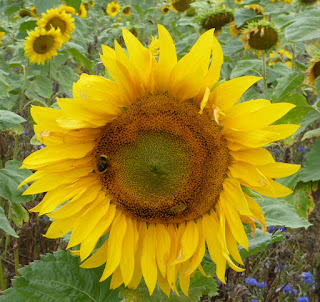 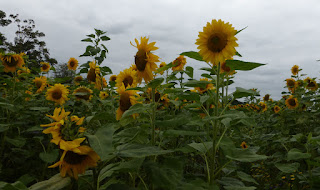 We had a blissful hour or so mooching through and I chose a few stems for a £1 each to pick and take home.

I FINALLY had a face to face physio appointment. Every phonecall  since breaking my shoulder has been with a different person which is so frustrating, you constantly have to start again each time and some have definitely been better than others! I had a call at the end of June with a female physiotherapist this time, who actually listened and agreed with what the consultant at the fracture clinic from way back in March that I needed face to face treatment. She booked me a slot for 5 weeks time (which was the earliest one they had) in the neighbouring town to me so I could get there by bus as we don't have a car, in fact she even told me which bus to catch and where from! I know I'm being sexist but I swear often it takes a woman to get things done.

Anyway I had been feeling quite good about my progress but when I got there the physiotherapist (also a woman huzzah) was shocked at how solid my shoulder joint was and thought it likely I would never gain full range of movement back. She gave me some different exercises to do and booked me in again for the end of September even though ideally she would have wanted to see me within 2 weeks but as ever there were no available slots. She explained I would likely need to be referred back to the fracture clinic for a procedure which she warned would be painful and sadly does not always work as well as they would like. Her plan is to get me to the point where I can dress myself without difficulty and I'd be fine with that.I came out feeling thoroughly deflated and depressed and headed into Oxford for a colleague's leaving do. It felt very strange to be back at work with all the team.

The next day I decided I'd be damned if I was going to have a painful course of treatment if I could avoid it and started doing my new exercises religiously. Dear god they hurt, so I figured they must be doing some good! The physiotherapist had advised using a traffic light system for the levels of pain. Green and amber is fine but if it gets to red, stop you are doing too much. I gritted my teeth and went amber as much as possible.

I have carried on walking as much as possible too and started to try and go out at lunch time rather than just sitting on at the kitchen table. I wish I could say it has made a difference to my waistline but annoyingly it hasn't, my stamina levels are better but I remain stubbornly fat.

The menopause has certainly distributed that fat in different and sometimes unexpected places (armpit fat any one??) I might currently be the same weight as I was a couple of years ago but I'm most certainly a different shape! I never have had curves, I used to be tall and thin. Now I'm tall and solid, kind of rectangular like a wardrobe.

Talking of wardrobes I did buy a couple of new dresses. Not being able to do up back or side zips means the vast majority of my work dresses were out of the picture for as and when I did start going back into the office. Himself goes to work much earlier than me and I'm not about to sacrifice an extra 2 hours of sleep just to get zipped into something! I was also of the sneaking suspicion they probably wouldn't zip up anyway even if I had asked him, we'll have to see about that at some point I suppose, but now is not that time.

I bought this black dress with gold embroidered suns and and stars in FatFace. It's not somewhere I usually shop but I walked past when I was mooching in town and noticed they had a sale on. As I say it's not a store I usually go in, it's just not somewhere I shop, but for some reason I felt drawn to go in. In fact I dithered outside so long anybody watching me must have thought I was up to something! In the end I thought sod it and went with the feeling and was delighted to find this dress on the sale rail in my size. I love it and have worn it several times now including to Birmingham for my day out. 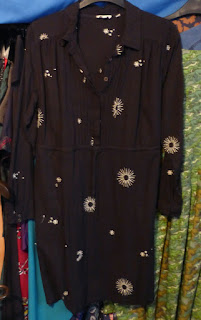 I then found this Seasalt dress on Ebay. It's ideal as you just pull it on so not even buttons to fasten. 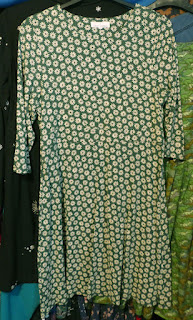 Finally I treated myself to this lovely dress off the Collectif website and wore it to the first day of the students being in. (It's a much more vibrant turquoise that it looks here.) 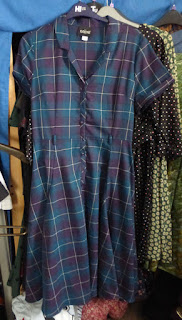 I finally got to wear one of my Snoopy Erstwider brooches out in the world too. I bought a couple of handbags in their sale too. 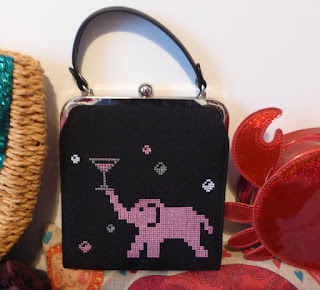 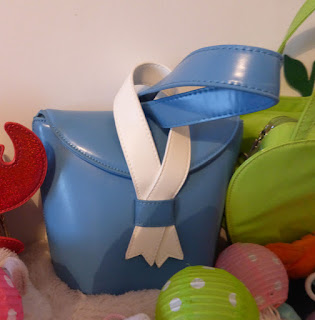 My Mum has finally stopped asking me why I keep buying handbags and instead said thoughtfully "When do you think you might have enough bags?" Now there is the million dollar question!