I have been trying to blog at least once a week but suddenly I find 2 have passed without a word from me. Both weeks were equally busy and there were highs and lows, and laughter and tears along the way.
I finally had some time off work, only 3 days, which if anything only made me realise how damned tired I really am and how much I desperately need a proper break. Sadly that's not going to happen until Christmas so it's head down and soldier on. I have had yet another cold which I can't seem to shake off, bah, I shall move on before this turns into a pity party for one!

First day off I took a trip into town for a leisurely trawl of the charity shops. For the first time in ages I didn't find one single thing, nothing, zip, zilch, nada. It does happen of course but I felt really flat having been all keyed up for a bargain or two. I ended up going to the real shops and buying a random load of things, all bar two of which I returned the next day! I should know better by now, NEVER shop if you are not in the right frame of mind!
Anyway some rather random photos of the 2 things I did keep, Little birdies and wee sausage dogs to warm the cockles of the heart. 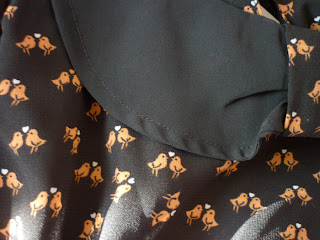 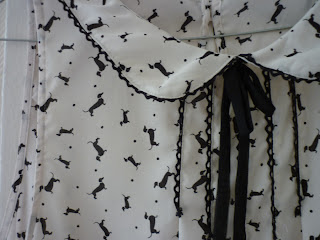 The birds are a little tea dress and the dogs are a sleeveless top which whilst not exactly autumn attire I have already worn to work due to the unseasonally mild weather we have been having :-)

That night Himself and I went to see The Rocky Horror Show at the cinema. It's actually the first time I've seen it on a big screen so I was quite excited. We didn't dress up, though many did, it was pretty much sold out which made for a fun atmosphere. What I still can't get over how many people couldn't do the Time Warp!?! I mean, come on, the words of the song TELL you what to do. I can't dance, I don't know my left from right most of the time (see driving lesson George Harrison story), yet I can do it!! Anyway apart from that is was ace.

The next day I decided to tackle phase two of the great wardrobe tidy. The chest of drawers and the mahosive pile of clothes that is ever growing on the floor in front of it. I set to with a will and achieved much. A big bag went down to a charity shop and another more modest pile was listed on Ebay. Not sure how long the neat drawers and clear floor will last mind!
Last day off I went over to my parents house to help Mum sort jewellery for her next Age Concern sale. Once we finished we decided to go to the local garden centre to see their winter wonderland. It wasn't as good as in previous years if I'm honest but I still managed to find a couple of decorations for my tree!

Saturday was Bonfire Night. I'm afraid as the local display is at the back of our house I always cheat and watch from the comfort of the back bedroom window with a large glass of wine! 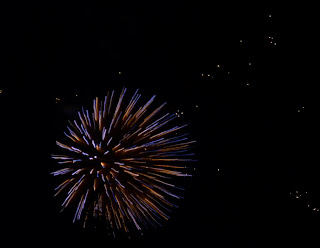 After that it was back downstairs to watch Strictly!

I was dreading the week just gone if I'm honest. Monday was my friend's funeral. I decided to go into work before and after, working on the theory it would be good to be occupied with things to take my mind off it. The service was lovely. The priest actually used to work at the library before he was ordained and knew Vera well so that made for a warm and personal atmosphere. It seems strange to say about a funeral but it was mostly joyful, just like Vera herself actually. The church was packed with people which was lovely to see but I shall miss her.

Tuesday and Thursday I had training courses which I was dreading and I wasn't sure I was going to get all of my work done by Friday which was a deadline day what with having had so much time out of the office. Thankfully I survived the courses and managed to get done what I needed too. I got home on Friday and collapsed in a heap witha huge plate of fishfingers and chips and a large glass of wine, I think I earned it.

Finally I had opened a new tub of Anchor butter whilst cooking dinner the other week, and it had a code on it that you could enter on a website to maybe win a prize for their 125 anniversary. I was waiting for Himself so I thought what the heck and entered it. I then got an email to say I had won a prize, but they couldn't say what it would be as they are picked randomly from the gift range available. I was thrilled but suspected it would probably be a tea towel as that was the lightest/easiest item to mail out from what was on offer! How chuffed was I to receive the below?? 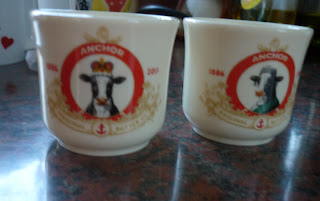 You know me and egg cups! They got christened on sunday. :-)
Posted by Miss Magpie at 05:25