Fashion on the Ration and a Baby Rhino Called Ian

Last week we had to have a huge planning meeting at work that started at 9am and instead of ending at 4pm as advertised overran by an hour and a half. We were all losing the will to live by lunch time so by the time I was finaly released to get the train home I was practically speaking in tongues.

This was swiftly followed by a Team Building Day!

As luck would have it this took place at The Cotswold Wildlife Park because that was what won all the votes.

It was great fun and some of us who hadn't been there for many many years got a bit excitable to say the least.(yes that would be me.)
The weather was gorgeous, there were amazing animals to see, with a few babies including the star of the day, a baby rhino who went the magnificent name of Ian.

I can only imagine they did a competition to name the rhino and someone picked a name from the hat to *big drum roll*“ AND THE NAME IS………Ian!!”
Yaaaay! wait what? did you say Ian? The rhino is going to be called Ian?? Oh!

Anyway personally I think Ian is a great name for a rhino and he was just the cutest thing, especially when he decided to wake up and gallop about a bit. 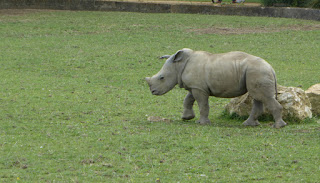 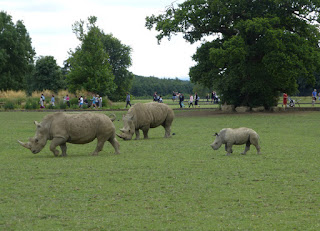 All in all a far more successful day than the one before. Even if I did manage to mistake a pigeon for a penguin. Unsurprisingly I didn't have my glasses on at the time.

This excitement was followed by another day off work to head to London with Soo to visit the Imperial War Museum’s exhibition Fashion on the Ration. 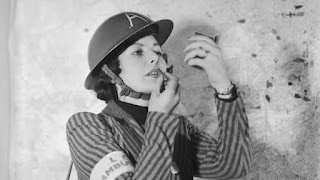 The exhibition has timed tickets and we were booked onto the 12.30 entry.
We got there a little early and whilst walking through the peace garden at the side we spotted an ice cream van.
Well that didn’t take much deciding, we were quick to justify it by the fact it would stave off the hunger pangs whilst we browsed the exhibition, very sound reasoning as I'm sure you will agree.
The guy was very apologetic and said he had only just filled the machine so it might be a bit soft and then proceeded to make the most mammoth 99 by way of the apology (to those not in the ice cream know, a 99 is a soft whip ice cream cone with a chocolate flake stuck in it)
You really can’t beat sitting outside on a sunny day eating an ice cream.

I will never get too old to eat ice cream.

From there we ambled into the museum and as we still had about 40 minutes we thought we would take a look at the Holocaust exhibition. It’s on the 4th floor so we took the stairs to work off a few of those ice cream calories, which also really reminded me we had done a lot of leg exercises at pilates the night before.......owwww.

As far as the Holocaust exhibition goes and on the whole for what I saw of it, it looked an excellent exhibition. We didn’t really have enough time to look round it all though.
The thing I had a problem with was the audio. I absolutely hated the propaganda broadcasts and film reels of nazi speeches.
They were just too loud, like really invasively so, and as they were on constant loop you couldn't get away from it, I found I couldn’t concentrate on what I was trying to read due to Joseph Goebbels ranting about the master race over and over and over again.
I ended up scooting through to slightly quieter part of the exhibition, frankly I couldn’t get away fast enough.

Before we got all the way round it was 12.30 so we took the quick exit and headed down to level 3.
As we walked towards the entrance I was busy rooting in my bag for the e-ticket when the man on the door greeted me with
“Ms Collins, you can go straight in but no photography”
Me taken completely by surprise “Er yes, what?, right, umm, how did you know who I am?”
Man on the door completely deadpan and without missing a beat
“ You have the air of a Collins about you”
That did make me laugh but I was honestly so completely wrong footed I went straight in without asking how he actually DID know who I was!

Himself said I should have turned and looked at the people around us pointed at myself and gone “See I’m important me” then waltzed in.
We surmised we much have either been the only 12.30 booking, or we were the last 12.30 booking to arrive. Or maybe it's just that I really AM that important ;-) 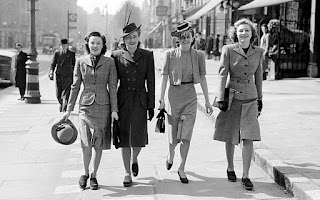 What a total joy Fashion on the Ration is. No photos allowed inside (Boo) so I have none to share with you but I cannot talk more highly of this exhibition, it’s just fantastic.
You find yourself completely immersed in the life that was uniforms, rationing, Make Do and Mend and CC41 utility clothing.

I only have one little niggle, and that is that there were many fascinating hand written letters included in the exhibition, but often the handwriting was very difficult to read. It would have been nice to have a typed transcription of the letter next to the original. Other than that I would have to say this was one of the best exhibitions I have been to in a while. It’s well curated and wonderfully engaging.

I have always been interested in the social history of war so this exhibition really ticked all the boxes for me. It was fascinating to see the letters from one lady who was almost delighted when rationing first began because she had 'masses of clothes that could be made over' and would be good for new things to wear for years to come. Right through to her weary letters from the late 40's wondering if rationing would ever end because her outfits had been made over so many times they were literally disintegrating and falling off her in rags, and that at this rate 'we will all be walking round naked'

Or the beautiful wedding dress made from fabric meant for petticoats that was knocked up in a few days for a speedy wedding then loaned to another 14 girls for their special day too.
I know it’s not on for much longer but I highly recommend a visit if you can fit it in before the end of the month.

Oh and whilst I bought a tiny wee lemur at the wildlife park (called Mahjong after the Eltham Palace lemur!) I didn't buy ANYTHING in London.

This is getting a tad worrying people.
Posted by Miss Magpie at 15:00