Well March has gone and I managed not to blog again, these monthly posts really are becoming a bad habit.
Work is still busy right now and we've had a little spate of resignations which doesn't help, it will be interesting to see what evolves over the next few months... let's just say I see some epic power struggles taking place. My plan in all of this is to keep my head down and carry on carrying on.

I started the month with a work event in London, no one from recruitment was free so I volunteered, it was kind of fun (even though it was on a Saturday) as it's been years since I last did one, we had a gratifying queue. I did my usual trick at the end of the day of getting in the lift, hitting the button for the floor I want and then just getting out when the lift stops without checking it's actually where I want to be first. I do this all the time and inevitably end up on the wrong floor, I never learn. This time there was another guy with me, so we both laughed in an embarrassed way and got chatting as we waited for the lift to come back, turns out he was from the other university in Oxford and had also stood in at the last minute for someone else. So we shared a cab back to Paddington which was ace as the underground was half closed that day and I was dreading the faff of finding my way back. It then turned out our next train wasn't for 40 mins so we went for a drink. Isn't it funny how life throws these things at you sometimes? I really was not looking forward to the whole journey home alone and so instead I was provided with some lovely company which made the time fly.
Soo said if it was a book of film this would have been the start of a romance, or a thriller but let me assure you it was neither, just some convivial company after a long day of being in work mode.

Talking of Soo we had to cancel plans to meet up not once but twice due to this mental weather we have been having. Our plans were scuppered twice by heavy snow. I even got a day of working from home due to the weather, which was a right Brucie bonus if I'm honest. I am SO over the cold weather though, where is the Spring?? I don't even want to think about our heating bill...

Anyway Soo and I finally did get together for a theatre date. I was very excited when I spotted an Agatha Christie production was going to be at The Playhouse in Oxford. Neither Himself or Soo's other half wanted to go (more fool's them) so we had a girl's night out to see 'Love from a Stranger'

To be fair The Playhouse blurb did make it sound more like a light romance which was why Himself was not keen. As it goes it was a deliciously dark and creepy rather sinister story with a classic Christie twist at the end. You do find that her stand alone stories, and this is based on one of those, are very much darker than people expect, she does plum the depths of an evil human psyche with relish.
I don't think I have ever seen a play where the tension is cranked up to such a degree that when it ended there was a moment of total silence from the whole audience then an audible intake of breath before the applause started and you realise it wasn't just you holding your breath.
I won't give any spoilers but it's an amazing production with an amazing cast and if you get the chance to see it,do!

I also did a bit of culture this month and popped my Literary Festival cherry.

I'm a bit ashamed to say it has taken me this many years to actually attend some of the festival, mostly these days I forget it is on as I don't go to that end of the city but we actually had some talks on at the school this year which we all got an email about so I took a look at the schedule. In the past there have been speakers I'd have loved to see but my old job wouldn't give you time off and typically the things that interested me were never in the evenings or at weekends but always slap bang in the middle of the day. This time I spotted 2 things on the same day, just an hour apart and as I had some lieu time to use up I booked some tickets.
First I went to see 'Railways and the Raj - How the Age of Steam Transformed India' by Christian Wolmer who I understand is a world authority on railways and trains. I'm not a huge fan of trains per se but having just been to India and having watched a fascinating series on the Indian railway I thought it would be interesting.
It was at 2pm on a Wednesday afternoon so as you can imagine it was full of train enthusiasts of a certain age and pensioners. The person who did the introduction said jokingly " I shouldn't need to say this really but please do make sure your phones are switched off"

You know where I am going with this don't you?

Literally 5 minutes in a phone roars into life, it's the old guy sitting across the aisle from me. He takes the phone slowly out of his shirt pocket and rather than switching it straight off peers at it for what seemed like forever before hitting end call button. He then fiddles with a button on the side and puts it back in his pocket. I thought he had finally turned it off, but no he had just turned it down a bit because a few minutes later it roars into life again just a tad quieter! By this time we are all looking at him and not poor Christian Wolmer, who frankly should have taken that phone and slung it. He does the same thing and thankfully it doesn't ring again, but he has left it on, and he has his email account open so literally every few minutes it's going 'ping' with an email coming in. Every time it does so he takes it out of his pocket and scrolls through the email. I was ready to beat him to death with that bloody phone by the end.
I am so used to the younger generation being incapable of leaving their phone alone for more than 30 seconds it was a revelation to see a grey haired pensioner behaving the same way!
Other than that the talk was good, though Christian is definitely an author and not a public speaker if you get my drift. I'll be giving the book a go when it comes out in paperback.

My next talk wasn't for an hour so I had an extortionate cup of tea and bit of cake before sitting outside in the sun for a few minutes, you have to make the most of it these days!
I then headed into the Divinity School at the Bodleian Library for 'Lady Fanshawe's Receipt Book - The Life and Times of a Civil War Heroine' by Lucy Moore.

I love Lucy Moore's writing and have read several of her books, I have also had a fascination with the English Civil War for years now and there is such a wealth of history of that era around Oxfordshire.

Once the talk finally got going (technical issues, it was funny to see the same AV guys as when I used to work at the Bodleian flapping about, 7 years later and they still can't get anything working!!) it was fascinating.
I hadn't realised that a receipt book was the precursor to Mrs Beaton, so full of recipes for food and medicine and the minutiae of how to run a house and home and not just household accounts. It turns out Anne Fanshawe is famous for writing a diary of the time but until the 1990's they didn't realise she also had this receipt book as it went to a different branch of the family, so putting the two together has given a whole new wealth of detail about holding a home together through a brutal civil war.
I absolutely loved this talk and was so glad I went and such a great setting for it too.

My final outing this month was to see the comedian Richard Herring's new show 'Oh frig I'm 50' in Reading. There was the most mental hail storm which had us dashing into Primark to take shelter! For about 20 minutes it hailed like armageddon, when we finally ventured out there was a carpet of white and great piles of hail stones like snow drifts!?!
The show was good fun , but not ideal for me as I am in complete denial about impending birthdays right now.

So I'll end with the frock round up, I have done a fair bit of clothes buying in March all completely unintentional I assure you.
You will be delighted to hear the one dress I bought last month, 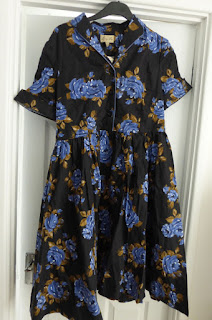 yes this one, had me slipping off the wagon and failing all my resolutions, and it was only February *sigh*
To be fair it was meant to arrive the day before I went to India but was late and arrived the day I left so I didn't get the chance to pick it up from work until a week later.
I didn't try it on straight away as is my new resolution which means I kind of forgot about it and when I finally did it was way too big and way too late to send it back.
Thankfully it was a sale purchase and I managed to get exactly what I paid for it selling on Ebay. Lesson learnt? Probably not.

So this month I have bought new jeans and a couple of breton tops, new undies and a cherry print blouse. I have also ordered some cut off jeans, black leggings, elephant print lounge pants and wide legged trousers for work from the Sainsbury's clothing event, but they haven't arrived yet.

I absolutely fell in love with one of the dresses from Hell Bunny's new Spring range and when I also got a 20% voucher I couldn't resist. 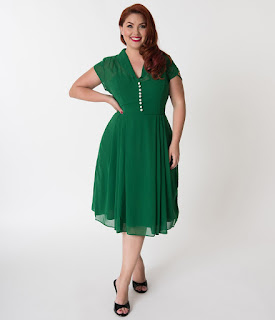 I love it and yes, yes I tried it on as soon as it arrived!
I also bought this one from their sale section 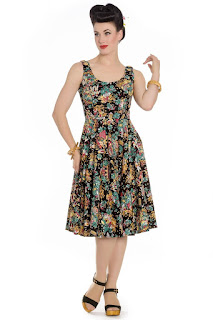 both fit perfectly = Huzzah.
I had to nip into town for a few bits and spotted a green dress in the window of New Look. As you know I am a sucker for green which is en vogue right now apparently. I knew I had to have it so I popped in and ended up buying two dresses (it seems to be becoming a habit!) 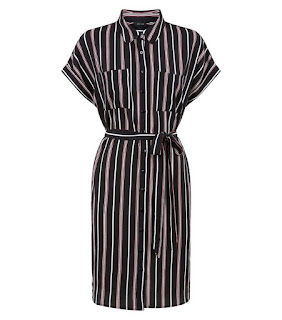 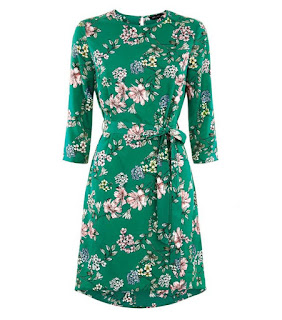 but I absolutely love them both and get complimented on the green one every time I wear it.

So that was March, I suspect you may well get just one blog off me next month too as I an working all weekend next weekend (bah) and then I'm off to New York again for work the following week.
This time I have actually managed to tack some holiday on the end of the trip which I am thrilled about. More anon.