This Means Nothing To Me. October - Part One

Another month another missed blog post. October has been jam packed and it's taken me until now, mid-November to even have time to think about blogging.
I still can't quite decide whether to do one massive post or two smaller ones, I'll see how it evolves...

The month started with a trip to the cinema with Himself to see Venom starring Tom Hardy. I'm not in the swooning club when it comes to Tom Hardy, so this was all to do with the comic books and not the man. Sadly the film was a big old mess, such a shame.

We also liberated my Dad from his care home for the evening to meet the rest of the family and eat huge pizzas (and in Dad's case drink gin) to celebrate Nephew Number One turning 24. Where does the time go??
It seems like only yesterday I was dancing round the room singing along to You're Gorgeous by Babybird with him in my arms.

This was followed by a busy time at work shortlisting and interviewing potential students. This culminated in our in person interview day which happened to take place on the day when storm Callum was giving us a run for our money. I was leading a tour group through a door, in full flow about the wonderful facilities when the wind blew the skirt of my dress right up over my head. Being British I just pretended nothing had happened and swept through the door in full flow whilst batting my skirt back into place.
All I can say is thank the lord I was wearing leggings under my dress that day (due to my foot and calf being heavily strapped up with orange & black tape) ore those poor candidates would have been scared for life! Himself ever sympathetic just said "well you do keep wearing dresses with voluminous skirts"

The next weekend I was helping out a a recruitment event in Vienna. I arrived with a colleague Amy on the Friday evening, checked into the hotel, and then met up with another colleague who had done a fair the night before. The three of us jumped on the metro to the city centre to get dinner, where irony of bitter ironies, we talked over dinner about travelling for work and not getting sick in the places you would expect it. For example Amy having been pretty much all over the world had only ever been ill in Paris of all places.

You know what is coming next don't you?

Yes of course I jinxed myself by saying I had been lucky and never got ill yet, then proceeded to have one of the worst bouts of food poisoning I have had in years.
As we had traveled light with just hand luggage I didn't have my usual huge washbag come pharmacy on me but mercifully for me Amy still had some of her Paris emergency medication with her which I gratefully accepted.
I genuinely do not know how I got through the day, sheer grim determination and bloody mindedness.
We had 4 free hours which we had planned to do some speed tourism in and I popped another pill and headed out into the fresh cold air because if nothing else the hot and airless hotel was making me feel worse. 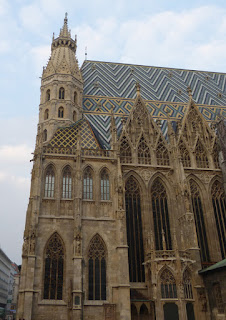 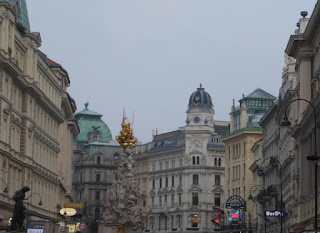 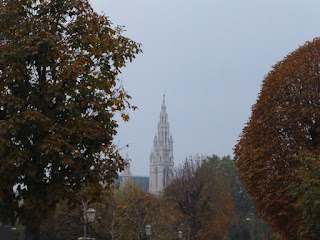 Vienna was just beautiful, easy to get around on foot or on the metro and well worth another visit if I ever get the chance.
I will say very randomly the centre of the city seemed to have an extraordinary amount of shoe shops and it seems Amy is something of a shoe fanatic. As time was of the essence she did resist for as long as she could before pleading to go into a couple of shops. So yes I ended up trying on various pairs of boots as you do when in a vast shoe emporium and of course I fell in love with some 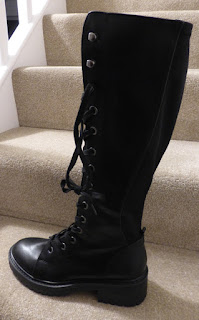 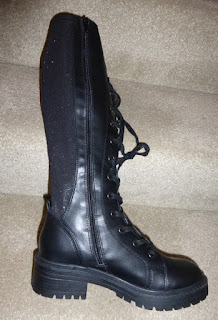 They really don't photograph well but the panel at the back is glittery!! *swoon* so yes they came home with me, I managed to force those babies into my hand luggage somehow!

We found the most delightful traditional Viennese cafe where I sipped tea and ate a plain potato fritter whilst Amy indulged in Vienna Schnitzel and Sacher Torte then it was back to the hotel where I spent another wretched night.

With me dosed up again we had just enough time to squeeze in a quick visit to a Klimt exhibition Amy was desperate to see before we had to head to the airport. Of course the flight was delayed and the coach took forever to get to Reading where I then had to wait for a train home. I was fit for nothing when I finally got home and just crawled into bed.
I was actually bad enough to have to take 2 days off work which pained me more than I can say as it broke my 6 years with no time off sick record. Now that seal broken I fully expect to be stricken with all sorts *sigh*

Thankfully I was feeling human enough to go and see Bohemian Rhapsody at the cinema by the end of the week. 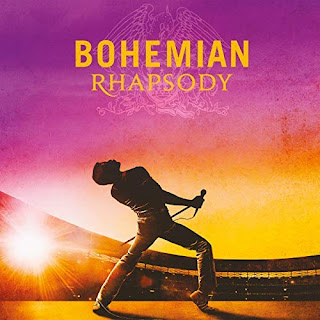 Overall I enjoyed it. Certainly the last 20 minutes were mind blowing and pretty much saved the film which up until that point was more like one of those rather awful Channel 5 dead celebrity drama documentaries.
Of course the music was amazing (I have always loved a bit of Queen) and as I was explaining to the millennials and generation z-ers I work with, who are all far too young to know, that performance at Live Aid really was that seminal. Ask anyone about Live Aid and Queen is what they remember the most.

Ok I have just seen the time which means this will most definitely have to be part one.