More Garden a Bit Of Tidying and Other Things.

So Today I should have been ticking an item off my bucket list and going to The Chelsea Flower Show with my friend Charlotte. As an avid gardener since I was a small child, I'm not really sure why I've never been before but I haven't. I won't lie I'm gutted but at least the tickets will be valid for next year.

I was also annoyed to get a letter from The New Theatre in Oxford to say a show I was due to go to with Soo and Melissa in July has been cancelled. That I understand, what bugged me was they said they are only giving out credit notes not refunds and mine would only be valid until March next year. So now I owe Soo and Melissa money and also have an expensive credit note I'm not even sure I'll be able to use, the way things are going I can't see theatres opening up or shows touring any time soon.

Like Vix, and as mentioned in my last post, I have also been doing battle with a demented lady blackbird who tears up seedlings and freshly planted plants to steal the moist compost to nest build. I tried putting out a whole pot of just damp compost but she quickly took all of that and went back to raiding my seed trays again. Christ only knows how big it's nest is! 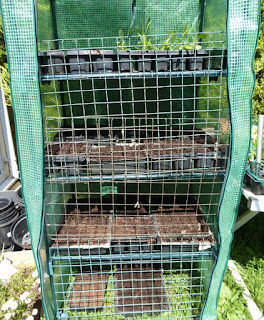 This was my bird proofed cold frame after she ran riot through it. I used the mesh shelves from another old cold frame I had had.
I have come to the conclusion mine is a reincarnated aromatherapist, she seems to be obsessed with my lavender seedlings, other plants get ripped up and thrown aside the lavender she actually flies off with. 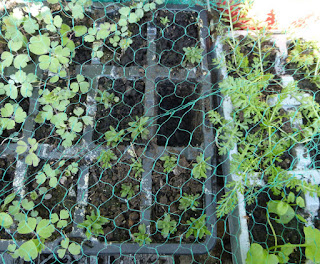 See the empty hole in the middle of the last row? That had 4 little lavender seedlings in it, I mean how the heck did one blackbird manage to carry off a great lump like that?? There was no sign what so ever left behind, just the empty hole!?!
As you can see I covered it over with mesh but she struck again when I potted them on a couple of weeks later and got under the net and flew off with another 5 plants for heaven's sake!
Talking of birds when I was eating my lunch yesterday I noticed a mini flock of goldfinches going nuts on an Aquilegia 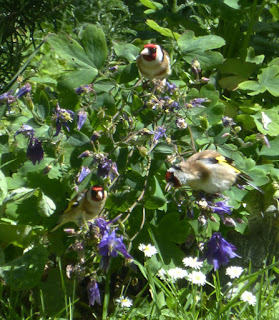 I still have no idea what they were all busy pecking away at. I checked if maybe there were greenfly on it but no and it's not like the seeds have set yet, very odd. The poor plant has not recovered from having half a dozen birds sitting on it and is now lying on the lawn.

Himself had his birthday this month and typically it was a chilly grey day so we took the chance to go for a walk down the old railway line which is usually way too busy. When we got back I just pottered about until it was time to cook dinner.
I decided to finally dust the bedroom properly and so I'm jumping on the show my dressing table blog post, late as ever. 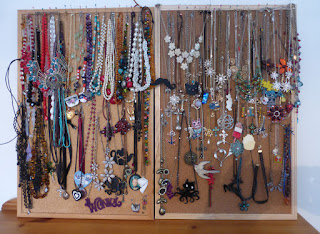 First up are my necklaces. My Mum saw something back in the 80's about using a pinboard for displaying jewellery  and we have both used them ever since. 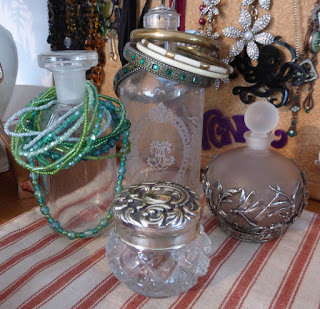 Left to right at the back. The bottle with the green bracelets I dug up back when I used to go bottle digging. The engraved one is from Past Times and the glass and silver perfume bottle was my present for being a bridesmaid at my brother's wedding and is also from Past Times.The little silver lidded bottle at the front was my Nan's. 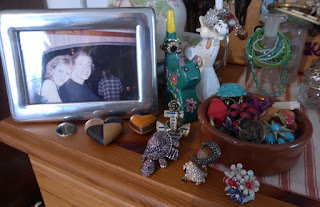 These are all my rings, on two ring stands and in a dish. Two dyed wooden hearts I bought at a craft fair and a very old photo of when we first started dating. 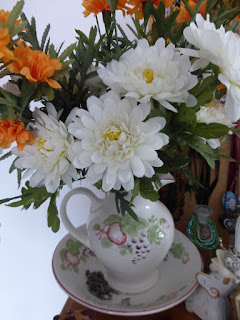 This jug and ewer behind them, I bought in Boots when they used to do home wares. The silk flowers came from an awesome shop called Sylvester that used to be on Little Clarendon Street in Oxford which I loved. The bells in the bottom are an ankle chain I bought when I was a student. 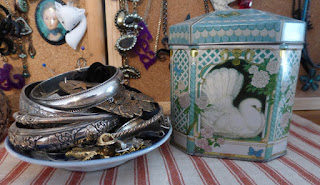 This is a china candle holder I bought at a craft fair and it holds my silver bracelets. the tin is a tea caddy I bought in a National Trust  shop in the Lake District when I was 11. 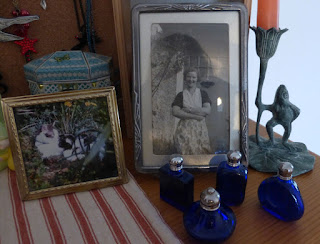 The photos are my adored cat Edward who just had my heart, more than any other cat I've had before or since, and my Nan. I found the frame in a drawer when helping her pack up her house to move in with my aunt. She gave it to me and I love the frame so much so it seemed fitting to have a picture of her in it. The mini blue bottles she gave me for my 25th and the frog candle holder I bought in another defunct shop called Angelic that used to only sell candles and candle holders.

Next up is my pixie in a jar. I bought him when we first moved to Oxfordshire in 1984 and my 'Piglion' that my Dad bought me many years ago. I saw it in a shop when out one Sunday with my Mum and Dad in West Wycombe. Dad called back there before my birthday and bought it without me knowing. I was so surprised and so happy when I unwrapped him. 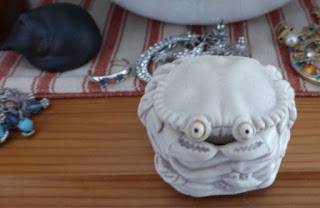 The next is a little crab pot my Mum bought me because I'm a Cancerian, behind is a tiny clay cat  that I bought in a shop that used to be in Oxford called The Cat's Whiskers. As you may have guessed  it sold just cat themed items. Next earrings. The wooden holder was a gift from my friend Jenny and another clay cat from The Cat's Whiskers. 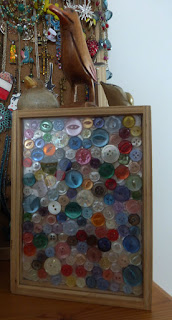 Finally this box frame has buttons from my Nan's button tin. I used to play with it for hours and hours when I was little. On top are a collection of 3 quirky birds. 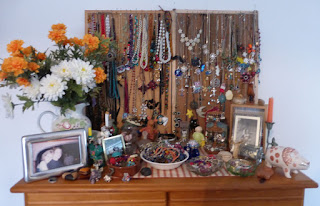 So there's my dressing table.

It's been a busy and tough month so I have been finding solace where I can like the gorgeous full moon. I just told you I'm a Cancerian, so I am deeply moved by the moon. I may not actually believe all that star sign stuff, but that is a fact I will agree with wholeheartedly. 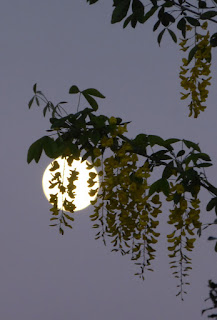 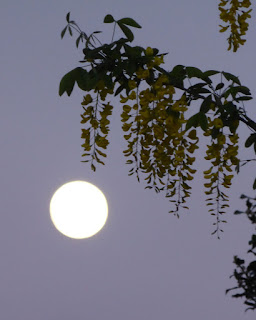 I am mesmerized by the moon, I sit and gaze at the moon and I just feel better.

The highlight of my week this week was managing to FINALLY get a Tesco online shop slot which involved me ordering much wine to replenish the depleted wine fridge. Sadly trying to get a repeat prescription from my doctor's surgery I was not so lucky. Knowing how shit they are I started the process 2 weeks before I actually need it. Here's hoping next week works out for that!

There may have been a few lockdown purchases but I'll save them for another post...
Posted by Miss Magpie at 15:12