Tuesday dawned another glorious sunny day so we were down early to have breakfast before taking a stroll down to the harbour as we had a walk planned for the day and Himself wanted to start and end it on a pier.

We began on the little pier in Broadstairs and walked The Viking Way, which is part of the coastal path, to Margate. 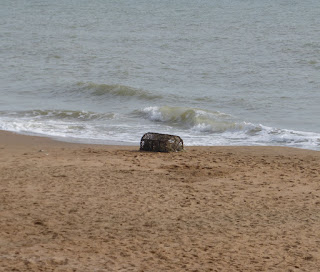 We started down on the beach where a random lobster pot had washed up much to the confusion and excitement of the various dogs being walked. It was a lovely gentle beginning and then we reached this deceptively easy looking path up to the clifftop. 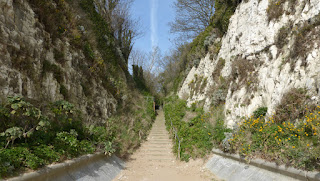 Trust me it just kept going and going up and up, my lungs felt like they were going to explode by the time we got there.

Once on the clifftop you walk for a while through a gated community which for a nosy cow like me was great fun, getting to peer at all these huge houses with their landscaped gardens.

Who needs Durdle Door when you have Botany Bay at Kingsgate? 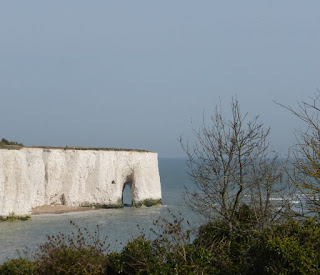 Apparently it's a great place to find fossils and I really wanted to go down to the beach to hunt for some, but we had timed entry tickets for the Turner Comtemporary in Margate so were against the clock. Maybe next time.

We entered Margate and passed the now sadly quite derelict Lido. The underground music venue at the Lido was where we first meet when I went to see Himself's band playing, and according to Himself, where I picked him up at the bar!

It's so sad to see the state it is in and I hope the campaign to save it is as successful as the one that saved Dreamland, Margate's other historic & famous landmark. Hopefully they will bring it back to life in some way, probably not to the degree of the picture below but hopefully something somehow. 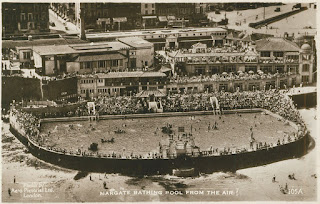 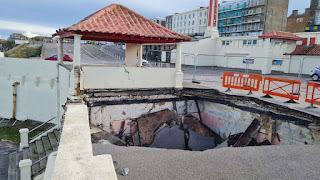 We made it to the end of the pier in Margate with just 5 minutes to spare, but I just had to take a picture of the amazing sculpture of Mrs Booth the artist J M Turner's landlady and mistress. 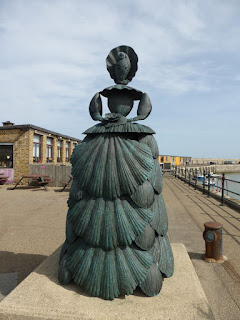 I was absolutely roasting in my jacket by the time we hared up the steps and into the gallery. Goodness knows what possessed me to wear one on such a sunny day.

The gallery was much smaller than I thought it would be so it didn't take long to walk around. I was quite disappointed if I'm honest. Once we were done we headed into the old town to our favourite cafe for a much needed drink.

Margate really is a town of two halves. The Old Town or Market Place is busy and bustling with shops, galleries and cafes. The beaches look great now the sea walls have been renovated and of course Dreamland's rebirth is a triumph. The high street however is heartbreaking to see now, rundown and pretty much completely empty.

We mooched about a bit reminiscing before heading to the station to catch a train back to Broadstairs as we had an early dinner booking. 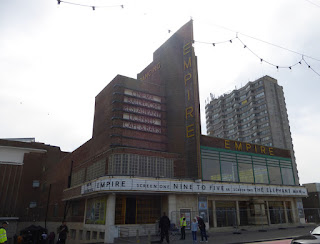 It turned out they were shooting part of a Sam Mendes film with Colin Firth and Olivia Coleman at Dreamland so it was temporarily renamed The Empire and cordoned off. They have also been filming in Oxford so I will definitely be checking it out when it reaches the cinema.

Once back at our hotel we freshened up and headed out for dinner at Posillipo a gorgeous little family run Italian restaurant, I had the most delicious gnocchi with gorgonzola cheese. From there we nipped to Tesco to buy some beer and wine and as it was now pouring with rain jumped in a cab to visit our friends Paul and Claire.

In that mad random way life has it turned out our taxi driver was not only born in Abingdon, the nearest town to us, he went to school in the town where we live!

It was an early visit because Paul was heading to Belfast in the early hours of the morning so we were back at the hotel before 10pm.

Our final day we had decided to visit Canterbury, it's a beautiful city and somewhere we often used to go to for the day when we were dating.  Indeed it was somewhere we considered moving to when we were first looking to move in together. 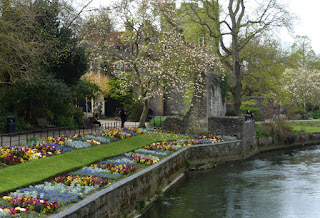 Again it was very much about revisiting memories as well as seeing what has changed. One of my favourite shops there Merchant Chandler had sadly gone, but another Siesta was still there. We had a lovely browse I bought myself a carved wooden moon wall hanging, a Mexican wooden day of the dead owl ornament and some earrings. Himself bought a bongo drum. I browsed the charity shops and the vintage shop I used to visit but didn't find anything to buy.

We had planned to go to the cathedral but half of it was closed for renovation and there was a huge queue outside so we decided to give it a miss. 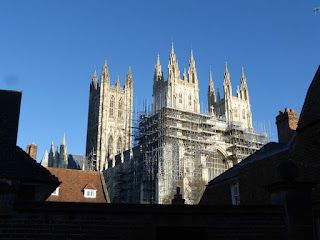 We decided to go for a drink instead and found a great little rock pub called The Lady Luck. Refreshed by a bottle or two of Newcastle Brown we had a look in a few more shops and just wandered about in the glorious sunshine before finding somewhere to eat dinner. 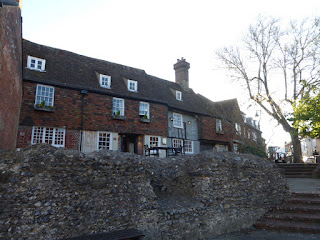 I was so stuffed after eating that instead of finding a pub as he wanted, I made Himself go for a walk along the river. 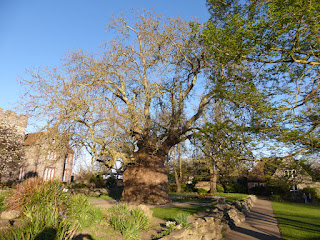 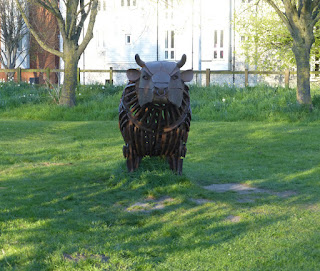 and by chance we found this bull sculpture by the ring road as we headed back towards the station.

We arrived back in Broadstairs just in time to catch the sun setting and reflecting on the sea bathing pool. We had such a great day. 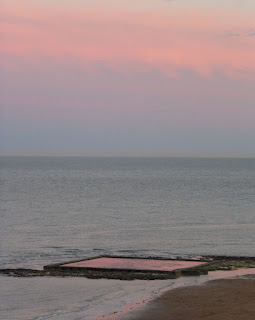 We were going to go to a few pubs but after a drink in The Chapel we both realised how tired we were and called it a night.

So that was our trip down memory lane holiday and I have to say it di the pair of us the power of good.