Green is the Colour.

So another week or more has passed by in a flurry of pasta and wine, films and purchases.

I have eaten out 3 times, all of which involved garlic bread and I’m out again tonight to Ask Italian. Now I’m no Mystic Meg, but I predict garlic bread in my immediate future too. My excuse, (should I need one) is Himself is battling a cold and the garlic helps me fight his germs. 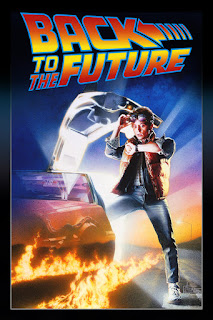 As some of you may know last week Wednesday was ‘Back to the Future Day’ and Himself and I met in town to do a double bill at Odeon of parts one and two. (Himself was not a happy bunny that his beloved Cineworld were not partaking in the event!) I have to say much as I do love the first film, I’m not a huge fan of Back to the Future 2, but I did thoroughly enjoy wallowing in nostalgia and seeing both films back on the big screen. 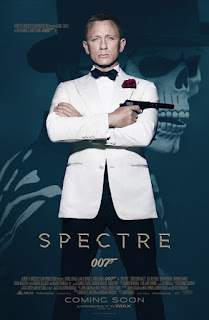 We also went to see Spectre on Monday. I enjoyed it, as a bog standard Bond film it did exactly what it says on the tin. It was nowhere near in the league of Skyfall but I did enjoy it, though there were a few things I found irritating, mostly the woman sat next to us who did yap through a lot of the film.

I managed to spectacularly cock up at the weekend and double booked myself which meant I couldn’t drop by and see Vix and Jon when they were in Oxford for a vintage fair, what a muppet!

Instead I felt I had to honour my other agreement to help my Ma out at a charity sale. Talking of which she was in the local paper last week for her latest charity sewing endeavour (sock cats) made to raise money for a new mini bus for Dad’s care home.
The reporter rang her out of the blue at home and ‘interviewed’ her over the phone so she was in a complete panic that she had said something daft bless her. They also visited the care home to take some pictures.

As it goes it was a pretty standard ‘local paper’ story ending with a pithy and oh so typical quote from my Dad, I could hear his voice as I read it and roared with laughter. A few other people who know him also said they could just hear him say it. Best of all it raised £300 in donations just from the story appearing, so well done Mum.

I’ve done yet more clothes purchasing of late and when I brought it all together last night for a hasty picture I realised it was 99% green.
Now I admit green is one of my favourite colours, and one I wear a lot but it’s unusual for me to buy in just one colour on this kind of scale! 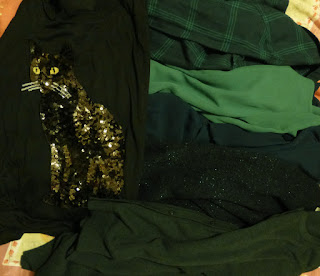 Lumped together in this photo are a cardigan, a shirt, a tunic, a dress, a glittery jumper and a black sequin cat. 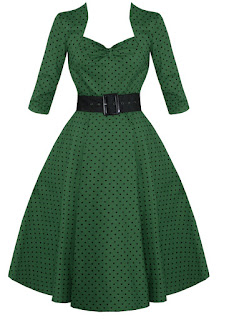 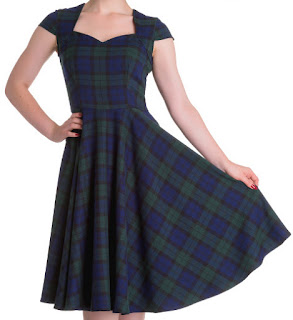 There is a story to the spotty one, I had an email to say it had been dispatched. Over a week passed and it didn’t arrive so I emailed the seller to ask for details. She provided the tracking number which showed according to the Post Office website at least that a delivery had been attempted and as no one was home they had 'left a card'.

Well obviously, and sadly not for the first time, they hadn’t left a card.

Not much help to me and my undelivered parcel as you can’t collect a parcel or arrange a re-delivery at our sorting office without the number from your card.
I printed a screen shot of the tracking details and took that. When I got there, before I could even explain the woman behind the counter went “What am I meant to do with that?” her customer service skills did not improve from there.
At one point she actually asked me, and I quote,
“Are you quite sure you don’t have a doggy who might have eaten the card” with admirable restraint I just said “Thank you yes, I am quite sure we have never owned a dog”!

I did eventually get my parcel. 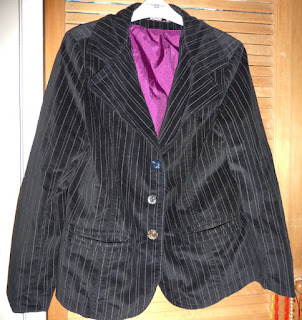 I also finally got around to sorting out this velvet pinstripe jacket that I bought for a £1 in a charity shop a while ago. I have always loved a velvet jacket, and indeed had a black pinstripe one I wore so much it's pile wore away and it went bald!
Well this one had weird patchwork floral elbow pads and hideous buttons. I unpicked the elbow patches, which was a pain in the arse if I'm honest, and replaced the buttons with three random vintage ones I had in my button tin. 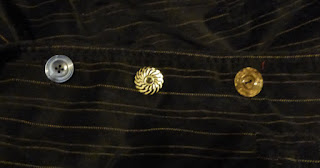 Finally as you can see I have added another pair of brogues to the collection, to be fair I actually sold a pair that I only wore once because they wrecked my feet, so really my collection hasn’t actually increased at all. 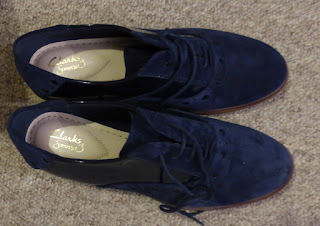