Greenwich and The Holy Grail.

Last weekend the summer seemed to be having a final fling so Himself and I took ourselves off to London for the day. We finally made our trip to Greenwich, we postponed it in May and yes it's taken us until October to get round to rescheduling!

Typically the one place I really wanted to see (The Queen's House) was shut for refurbishment until June next year *SIGH* We nearly postponed again, but in the end the siren call of a beautiful day and being on the guest list for a gig that night, had us up and out and on the train to London.
It was a bit of a faff to get to Greenwich from Paddington but so very worth it.
First stop was The Cutty Sark 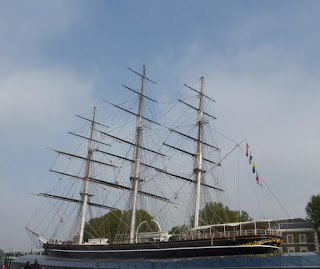 which we didn't go on because we were being tightwads, one of the themes of the day.
We messed around trying on hats in the museum there and exclaiming over the high tourist prices in the gift shop (another theme of the day.) 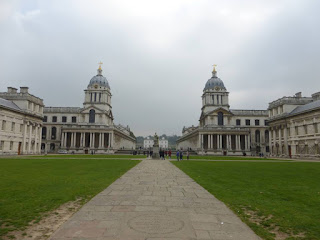 Looking remarkably well restored after Christopher Ecclestone crashed his space craft into it and Thor hit the ground with his hammer as you can see.

The Thames was out so I decided to risk life and limb on the slippery steps and have a wander on London Beach. One girl did go for a burton on the steps and that was her jeans covered in I dread to think what for the rest of the day. Bless her she even went to the waters edge to rinse her hands clean, I'm not entirely sure whether that would actually have made them worse or not. As you can tell I have no great faith in the cleanliness of the Thames! 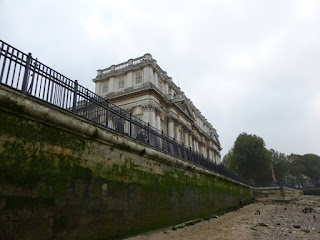 I can conclude London Beach smells and looks like any other beach, except it has the most extraordinary, and rather chillingly large, amount of bones washed up on it's shoreline that I have every seen in my life 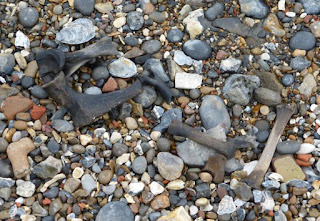 There were literally bones everywhere under foot, here's hoping all animal!

I have to share this zoomed in picture with you purely because it is exactly the kind of (infantile) thing I would do if I worked there. Kudos from me to the member of staff at the college who decided this would be a funny thing to do. I love to think how many tourist photos on closer inspection had a vampire minion in them. Heheheh 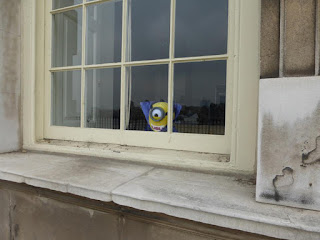 Next up was a skim around the National Maritime Museum, home of the largest ship in a bottle and possibly the biggest kettle/teapot in the world as well. 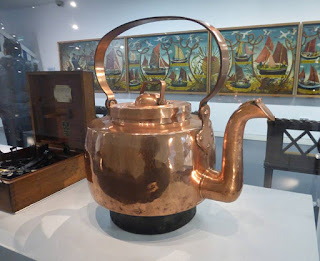 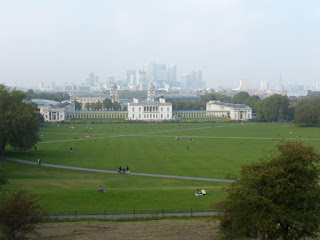 Fabulous views from the top and the observatory is beautiful but again we were tightwads and didn't pay to go in, so no pictures with one foot each side of the meridian I'm afraid.

Next up was a desperately needed cup of tea from a very cool converted airstream caravan, served by a huge, very musclebound and extremely grumpy man, another theme of the day as it goes.
Once my tea was inhaled we decided to visit Greenwich Market which was great fun even if sadly it was half shut for renovation, amazingly I didn't buy anything.

We ambled about Greenwich High Street from there and spotted a sign for the Greenwich Vintage Market.
With a gimlet look in my eye I turned to Himself and informed him firmly we were going there next, he sighed and said he hadn't doubted that for a minute.

Well dear readers it took us about 15 minutes to get around and I can recommend it as a novelty experience only. As far as vintage goes it was absolutely shit!
It was in fact more like stepping back into the Saturday or Sunday morning market every self respecting town used to have in the 80s or 90s. Full of tables of cheap, nasty plastic and nylon tat.
It has probably had the same tables with the same nasty items unsold on them since they were new in the 80s and since the 80s & 90s is now classed as 'vintage' someone has just altered the sign!

After that we decided some kind of food was in order but as it was 4pm and a gorgeous afternoon instead of sitting in somewhere we just grabbed some chips, which were served to us by a huge, very musclebound and extremely grumpy man.
Clearly in Greenwich you can only serve food if first show your weight lifting credentials!

We finally bid Greenwich goodbye and headed back into London on the docklands light railway where I got to indulge in my favourite sport of people watching. We were heading to a pub just around the corner from the Barbican for a gig by a guy called Luke Tuchscherer who Himself had helped crowd fund.

The weird thing was how everything was shut on a Saturday night. I know it's part of the business/finance district of London so probably isn't that busy at weekends, but there was something rather horror film-esque and weird about walking past restaurants and pubs that were all shut tight. We had a great night but had to scoot early to catch a train home, not wanting to risk the very last one due to some rugby match or another that was on.....

And so to The Holy Grail.

You may be wondering to which Holy Grail I refer? Well for me there is only one and OF COURSE it is a handbag.

Ever since I started collecting vintage handbags and my passion for them grew and grew I have only ever wanted to find one bag. It's not a well known make as you might assume but a colour.

My Holy Grail was to find the perfect green handbag, preferably 1940's, but it had to be green, which, as it goes is a pretty rare colour to find from that era. Over the years there have been a few examples that have eluded me, usually because the price was just way beyond my budget but I never gave up hope.
One rainy day at work I was browsing Ebay in my lunch hour, where first up I spotted this 'project' 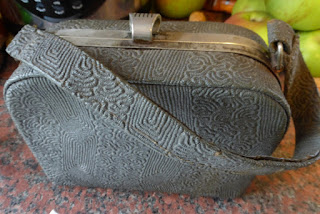 It was filthy dirty, the insides had seen much better days and the handle needed fixing. However the price was good and I could see potential. I have to say until it arrived I thought it was a very dirty black handbag.
However now it's outside has been cleaned it is actually grey! It's not finished yet, I just cleaned the inside this morning and once that is thoroughly dry I will glue then stitch the handle back together.

But what of the Holy Grail?
Well I came across this and my heart skipped a beat. 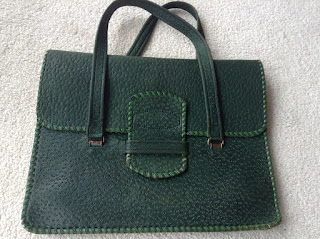 From the picture it seemed to be in fabulous condition, really quite wonderful and made of real leather.
I started watching it, convinced the price would just sky rocket like every one before had. As it goes the bag was set to end at a very random time on a Monday afternoon and I very naughtily logged on to Ebay when I should have been working and bid.
I really didn't want to risk putting in my bid too early and it paid off. I won and for just under £20.
I couldn't quite believe it, and of course I could shriek or jump about like a loon because I was meant to be working!

What can I say? It arrived in the week and the pictures did not lie, it's just beautiful. If anything the colour is a much richer vibrant forest green than it looked in the pictures and it is the softest, supplest leather you can imagine. I am thrilled to my core.

Thus the dilemma. Now I have found my Holy Grail does the search have to end? Is my collection complete? (lord knows I am running out of room to store and display them) Or do I simply decide on another Holy Grail? Is that too shallow?