Hello and thank you for sticking with me despite many silent months. Let's just say life has been challenging, especially at work. On top of the insane workload I got a new line manager in January who shall we say turned out to not be so nice. My mental health suffered as a consequence, some days it was all I could do to just get up and get through it. I couldn't even muster the energy for my lunchtime walk, let alone do things like pilates or my shoulder exercises so yeah the waistline has expanded again and I'm definitely stiff and the shoulder less mobile...

However me deciding I needed to take myself in hand coincided with a long overdue holiday and a very welcome and completely unexpected shift around with the team (meaning I have been moved away from the not so nice team leader) and I finally feel like blogging again. 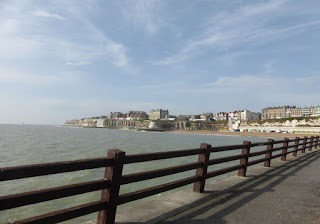 The post title is a quote from Charles Dickens about Broadstairs where we spent the week before Easter. Dickens loved Broadstairs and lived there at one time. There is a Dickens museum, Bleak House and various other shops, restaurants and pubs with themed names as well as the Dickens festival they hold here each year.

Himself declared a while ago that he would like to go back to Thanet. Preferably staying in Broadstairs, somewhere we both love and he used to work, and do some of the fun things we used to do before his parents ill health made every visit duty or drama. I kept it in mind and found a fab deal on Travelzoo for 3 nights in a very nice B&B to use before March 2022. We decided to ring up and see if we could tack another night on, we could but there were no free weeks in March so I ended up paying an extra £8 to extend the voucher and chose the 1st free dates they had in April. These surprisingly turned out to be the week before Easter when I would have expected them to be busy?

I had a bit of a problem booking and had to ring back 4 times, the owner was always too busy to speak to me before I finally rang and spoke to the other owner on my 4th attempt. He greeted me with "I don't usually do room bookings but as you've called a few times already I'll pop it in, I suppose you'd like a sea view?" to which I casually replied "Oh well yes if we can?, if there's one free?" and just like that we were booked in to a room with a balcony, a turret and a sea view!

Now I knew the voucher deal clearly stated it was for a non sea view and so did the first owner who finally called me back only to be told we were all booked in, let's just say he did not sound too pleased and which is why presumably he doesn't usually let his partner loose on the bookings!

Check in was at 4pm so we got up, had a leisurely breakfast before catching the train to London. We left in the rain but arrived to glorious sunshine. The B&B was up a hill overlooking the sea, and on arrival we were greeted by the owner's utterly adorable and very excitable 14 week old soft haired terrier pup Lula. Who then proceeded to climb all over us and pulled undone the laces on my walking boots 3 times in as many minutes. Check in took some time due to the enthusiastic canine welcome but eventually we escaped to our room right at the top of the house. It turns out room didn't have a turret, it was the turret! So both being tall, we spent the whole 4 days having to duck a lot but the sea view was lovely. 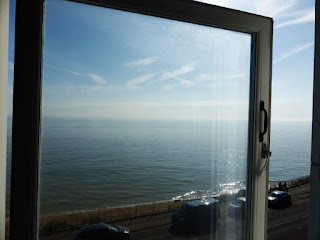 Sadly the balcony turned out to be a Juliet one, ie just bars across some double doors that opened into the room so no chance to sit out 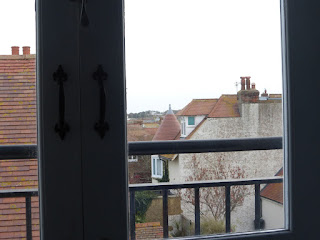 but it did give a welcome cool breeze as the turret room got very hot. Indeed the first thing we did once we had put our bags down and taken our coats off was open all the windows as the room was roasting.

Once we had done a cursory unpack we headed straight into town to walk along the clifftop promenade, calling in at Morelli's Broadstairs famous ice cream parlour on our way. The weather was so gorgeous we just kept going and  walked along the clifftop all the way to Ramsgate and back.

We then got changed and ended up having a very disappointing dinner at Prezzo as we hadn't thought to book anywhere. From there Himself couldn't wait to show me a pub called The Chapel which he had visited with his friend the last time he was down visiting.

Now back in the day when we used to go for a mooch around Broadstairs for the day, Himself liked to call into the Albion bookshop, he properly loved it. As a librarian I used to hyperventilate just going through the door. Everything was in mad precarious piles and nothing, NOTHING was in order!! Even though there were headings for different sections everything was randomly shoved wherever there was a gap so nothing was where it should be. I'm practically coming out in hives just remembering it!

Anyway I'm guessing the old guy who owned it either died or gave it up and it clearly got sold as a going concern. Someone very cleverly decided to turn it into a little pub clearing out some of the central bookshelves and putting in a bar and some tables downstairs but leaving the rest just as it was. They left the bookshelves round the walls upstairs and just put more tables between them. 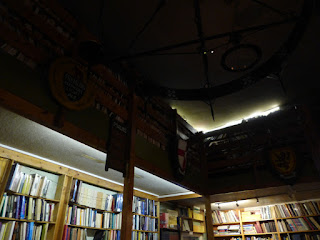 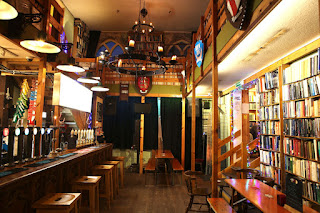 The very dark picture is mine and the better lit one I've pinched off the internet so you can see it in all it's glory. The choice of beer, cider, spirits and wine was great and you could select random books from the shelves and read. We spent the rest of the evening there drinking and killing ourselves laughing  reading random excerpts to each other from such weighty tomes as the one below. 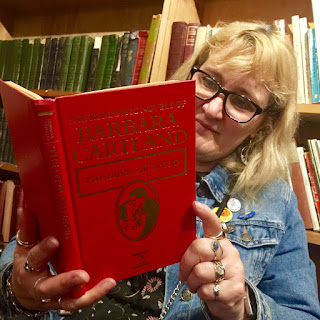 The next morning we were up early for breakfast. There had been some confussion as to whether we were going to get breakfast as the Travelzoo voucher said we did but the hotel said we didn't unless booked direct...Anyway I managed to sort that before we arrived so once breakfasted we headed out into another gloriously sunny day to mooch around the shops and see what was still there and what had changed. The old design shop Himself used to work in is now a chiropracters of all things.

I was delighted to see Arrowsmiths was still there, it's a sort of gift emporium.The first time I ever visited my sister in Ramsgate we went for a browse and I got a t-shirt saying 'Away with the Fairies' from there. I have no idea what happened to it, I'd definitely still wear it now. The only time I can get Himself in a charity shop is when we are on holiday so I took full advantage and made him visit them all, and there are a lot, on our way to the train station.

Our destination for the day was Whitstable. Himself worked there for many years and I visited him there at the shop a few times as well as having a couple of nights out at The Neptune pub. 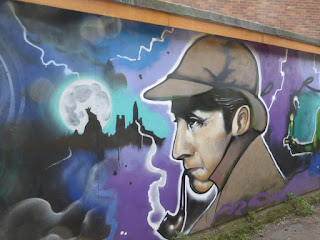 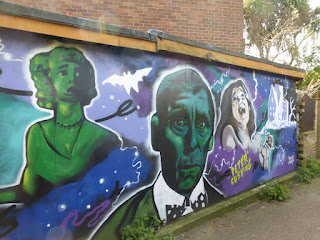 Walking from the train station to the town centre you pass this amazing mural commemorating Peter Cushing who lived in Whitstable and adored it there. The local Wetherspoons is even named after him.

We spent a lovely few hours just mooching, again seeing what has changed and what hasn't. It was super busy but then it has been the chi-chi destination for all the DFLs (as the locals call them) for many years now. We browsed whatever shops took our fancy, then bought an ice cream and walked along the seashore which seems to be mostly owned by the local oyster company. 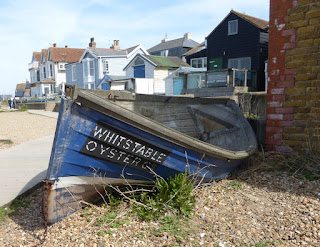 They have converted some of the single room beach/fishing huts into extremely bijou holiday lets. I dread to think how much they cost.

We were done by mid-afternoon so we headed back to Broadstairs and as the weather was so gorgeous found an outside table at The Pavillion.

Is there anything better than drinking crisp cold wine or beer, sitting on a balcony over the beach looking at the sea? My worries were a million miles away that afternoon I can tell you, but as we had evening plans we couldn't stay all evening tempting as it was.

I was heading out to meet my friend Kay and Himself was catching up with his old boss. So we headed back to our room to freshen up and I caught the bus over to Ramsgate. I can't tell you how lovely it was to catch up with Kay, we have been friends for 30 year's now having met through a friend of my sister one night and just clicked. We only managed to grab a couple of hours when I was last down for Himself's Dad's funeral and otherwise it's been the odd email and letter here and there. Kay works in social care and for a mental health charity, and well, I'm sure you can imagine just how ridiculously busy she has been during the last couple of years. I genuinely do not know how she does what she does, I take my hat off to her. She truly is an incredible and beautiful soul.

We had a wonderful catch up with dinner and more wine for me and gin for her, in the massive Wetherspoons in Ramsgate It's the biggest in the country and on the ground floor has doors that open right onto the beach. Sadly the time to head back came much to soon.Thankfully Himself met me at the bus stop in Broadstairs which was a good job really otherwise I'd still be trying to figure where I was now!

I'll share the rest of our holiday in my next post. Thank you again for staying with me.