So this weekend was Halloween and Himself and mine's 13th anniversary. We met when the party I was meant to be going to was cancelled so I went to see his band play instead. We got chatting after the gig (he likes to tell everyone I picked him up in a bar!) and the rest as they say is history.
Just to show how the sparkle has worn off I was out without him on Saturday night and he went away to his sister's for a long weekend!

Actually these were long standing plans and I did come home to flowers and bubbly on Friday night :-)

I decided to make the most of Himself's absence and attack my 'full to bursting point' wardrobes. I had a schedule all planned out but Saturday got scuppered by my dear brother. I ended up spending all afternoon sorting his garden out.
This is how it works. He asks me over for 'garden advice' and then has 'just got to do something, won't be a moment' and disappears until I have finished. To be fair he did feed me and give me a lift to and from the O2 Academy in Oxford where we went to see Feeder. Who were AMAZING, though very, very loud. Ears still ringing now, guess who forgot the earplugs....
I wore my Laura Lees grey leopard print dress, recently re-discovered in the middle of one of the full to bursting wardrobes. *blushes with shame*

So Sunday it rained, perfect clothes sorting weather. I set too with a will, emptying one of my wardrobes, cleaning it, loading the washing machine and trying on frocks a gogo! 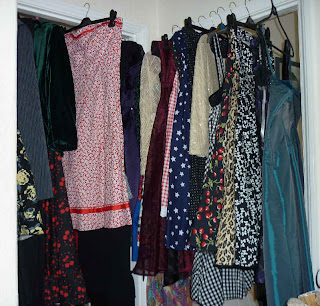 Here are most of the dresses from said wardrobe, getting an airing and waiting to be put back in it!

I then spent the evening answering the door to trick or treaters and listing items on Ebay.

The 3 shameful things I conclude about my day:

2. Even though I sorted, re-hung and got rid of a load of dresses, I STILL can't close the wardrobe doors!

3. I haven't even started on the other wardrobe yet.... 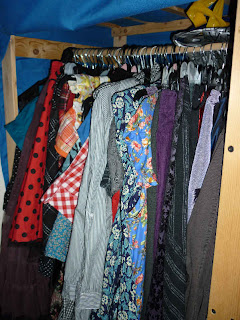 Reminds me of one of those lifestyle type programmes I saw on t.v once where the presenter said 'how can you say you love clothes when you treat them like that?' to a woman with cupboards like mine.
Posted by Miss Magpie at 14:06