This Week it's all About the Boys and the Food.

I have finally found a little time in the manic schedule to drink tea and blog. In all honesty I *should* be writing christmas cards but I'm a bit carded out if truth be told and as I have been banished from upstairs because Himself is 'wrapping things' what better excuse do I need?

So last Saturday I was up at 6am (6am mind!) to head off to Torquay for Nephew Number Two's 2nd birthday. Thankfully we managed to not only catch the right train but also find a seat, it was freaking packed with people even at that hour! Unluckily for them, as we were going to miss our boiled egg breakfast I made egg sandwiches for the journey instead. They were delicious but 'fragrant' as only an egg sandwich can be! Anyway the journey passed without incident and we arrived in a sunny but freeze your bits off cold Torquay by 11am. It was the wee man's party at 3pm so we did some catching up first before heading out to party 2 year old style. 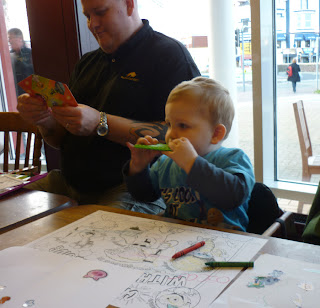 Much fun was had by child and adult alike in the ball pit, (sadly no photo's of that) but most exciting thing of the day by far turned out to be this plastic pan pipe that came in the childs goodie bag when we arrived, ain't that always the way?
Once the birthday boy had retired for the night, out came crisps, brownies and much wine and well I'm sure you can imagine the rest........
Lets just say we got home on Sunday just after 8pm only to discover not only had Himself forgotten his socks but also my bottle of Advocaat *weeps* (about the Advocaat not the socks obviously.)

Monday was going to be a day of action as we were both off work. I had plans, big plans, but somehow I couldn't get motivated. I was fiddlearsing around as my Dad would say when my sister in law rang up and said she could fit me in for a hair colour in the afternoon. As I was showing the kind of roots that make grown women cry I shot off down there as fast as my feet could fly.
I did sort of put the tree up but that was about it, I do have a lovely golden barnet though!

Tuesday was work, home, change and fly out of the door and on the train to Reading to see Ross Noble. As you may recall from previous blogs we are both huge fans of his and this was a chance to see him in a small venue. We were in the front row which is never a good thing as he does like to interact with his audience, ie: harrass latecomers and jest with the front row. Himself got into a slight difference of opinion with Ross about Star Wars, (never a good move on anyone's part as Himself is an unashamed geek of all things Star Wars.) I was refered to as the lady in a 'The Killing' jumper, and entered a lively discussion about whether one should buy the boxed set of Series One or not with the next comedian on stage. Oh I also managed to drop my freshly laundered scarf in my beer!?! It was a great night, but a late night and getting up the next morning was painful.

Wednesday was Christmas lunch day at work which everyone gets ridiculously excited about because it is free food and drink. It was a lovely dinner actually and much needed as I had to hang around in work until 6.40pm before I got a lift to Nephew Number One's end of term performance at college. Now those who know me know I am not one for swearing unless the situation/person calls for it but when asked what I thought of the evening my dazed response was 'Fuck me'. Himself's was 'Fuck me' followed by 'Never again' so you get the gist.

Sadly for the poor kids involved it was bloody awful, a complete shambles. There were 4 'bands' on that night the 3rd of which had Nephew Number One in it. These 4 were put together by the tutors, who basically told them : Who they were playing with and what instrument they were expected to play, then just left them to it!

The sound was appalling, seriously the man on the sound desk needing taking outside and lynching!! I felt so sorry for the poor kids, as not only could you hardly hear the guitars they also had to battle with screeching feedback!
On top of this they came off stage saying the volume on the monitor kept going up and down which meant they couldn't always hear themselves singing. Of course this meant even the ones with good voices were going in and out of tune as it happened. I would go on but I won't bore you with more details and to be fair there were also some kids who were just crap, even the best producer in the world wouldn't have helped them.
But all in all it did make for a painful listening experience.
There were a handful of kids who shone and I am proud to say Nephew Number One was one of them.

My brother is starting to question exactly what it is he will get out of this course though.
I must say I can't see the logic in giving a kid an instument they have never played before and making them get on stage and play it in front of an audience after only a few weeks practice, as far as I can see it's only ever going to make them feel like an idiot and crush their self esteem when they screw up. Oy.


Thursday was lunch in the canteen at work and Friday was my departmental Christmas lunch. God bless the button on my trousers is all I can say!
The diet starts................in January!

I shall leave you with a picture of the shopping Himself came back from Sainsburys with. I have to make the puddings for boxing day and sent him out with a detailed list and a very unsubtle hint about the 'It's a Wonderful Life' boxed set...... 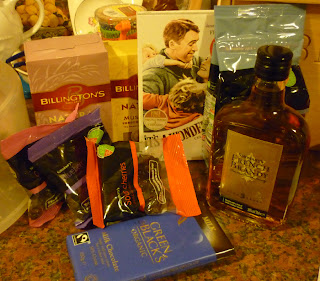