The Curious Incident of the Dog in the Nighttime.

On Thursday I rushed home from work (via the chip shop!) and out to the cinema with Himself to see a live streaming of the the National Theatre's production of 'The Curious Incident of the Dog in the Nighttime'. 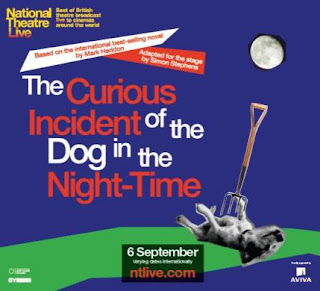 I have never seen a theatre production live at the cinema before and I wasn't sure how I would feel about it but right from the start I was totally engrossed.

I have to confess I have never read the book, which has recently been voted as one of the nation's favourites. I have heard of it of course, I would have had to be living under a rock not too! So I did know it was written from the perspective of an autistic boy who finds his neighbour's dog dead.

Whilst I don't claim to be any kind of expert I do have experience of both Autism and Aspergers from a good friend's son, an ex-work colleague Ben and my brother's nephew. So I was able to relate more easily than Himself to Christopher the main character.

I raise my hat high to Luke Treadway who played Christopher, his performance was absolutely extraordinary, just mindblowingly good. 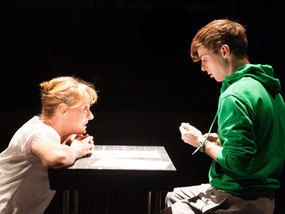 There was a little piece before the play began which explained it's background and how they came up with the ideas so we could experience how things feel to Christopher. They worked closely with an advisor who was herself autistic, and I have to say the moments where they had people rushing around the stage, and painfully loud jarring music until you almost can't bear it for another moment were particularly effective to show how autistic people can get completely overwhelmed because unlike us they cannot filter everything they see and hear.

Christopher loves Sherlock Holmes so he decides to investigate who killed Wellington the dog, instead what he uncovers sends his home life spiraling out of control. I won't give any more away than that.
You can absolutely understand the points where both his parents are driven to despair, and more terribly, to furious anger by Christopher's behaviour. You feel their agony when he is distressed and all they want to do is scoop him up and comfort him but they can't because he can not bear to be touched.
Quite simply this is a wonderful production with a top notch cast and I highly, highly recommend it.