It's been another mad week and I think physically I am starting to pay the price. I have spent two days with a terrible sick headache that tablets have barely touched. Finally tonight I am feeling more human again just in time to go back to work tomorrow for the chaos that is an interview day *sigh*

So Monday I went out with some girlfriends to Byron Burger - FINALLY!
It has been a long time coming and it was well worth the wait. I was actually in pain I ate so much! but it was sooooo good. I have to say the burger was lovely and everything, but it was all about the accompaniments for me. The cream soda float, the courgette fries and peanut butter ice cream well they stole the show as far as I am concerned and we got 40% off with our staff cards! Now that is what you call a result.
Sadly I got to spend nearly an hour kicking my heels at the train station afterwards due to a car hitting a bridge somewhere along the line. That seemed to be the theme for the week with my train home being delayed for one reason or another every night.*Oy Vey*

and then there has been the rain, and the fog and then more rain followed by yet more rain. Not that it stopped Soo and I going Christmas shopping in Witney and a very successful day we had too, despite the rain.
I bought myself a few bits (opps) and got a few great pressies we also talked non stop and laughed a lot, just what the doctor ordered.
I remembered my camera this time and took some pictures of some of the amazing knitted lampshades in Wetherspoons when we stopped for some very welcome lunch and a well earned glass of wine. 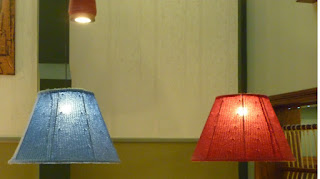 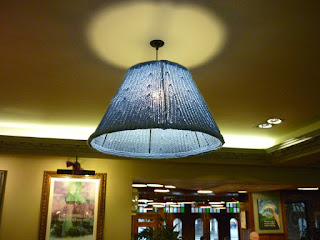 Himself and I also went to see Ross Noble again, I hadn't realised we were in the front row! 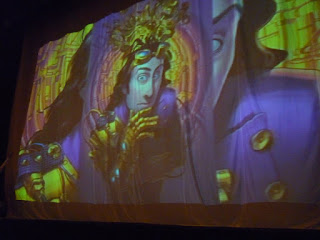 Thankfully we were to the side and other than telling me I looked agonised when he was discussing the possibility of getting a My Little Pony stuck up his arse, he left us be. He was brilliant as ever and showed no mercy to a couple of dumb hecklers.

I have decided to just take some pictures of the frocks I have been wittering on about for various posts, me looking like death warmed up is not going to show them at their best!
Maybe later I will take some of me actually in them, especially the blue 1980's does 1950's one, seeing it on a hanger does not do it justice. 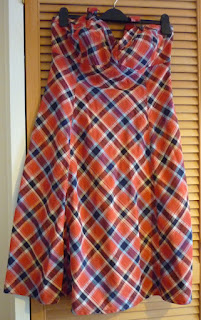 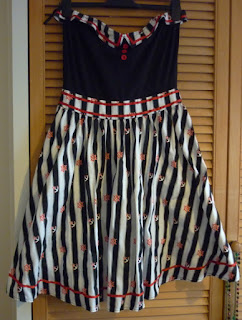 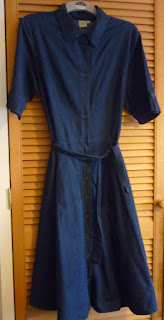 The middle one is the one I'm not sure about, the one that might just look hideous on.....
Posted by Miss Magpie at 14:08