I know you are all going to think the frocks I keep blethering on about do not even exist at this rate, I can assure you they do and I will post pictures, I will!
I haven't had a chance to do so as yet because I have been on a Hen Weekend.

I was a little anxious about what the weekend would involve as Katy (The Bride) is very, very sporty. She rows, she surfs, she snowboards she is generally outward bound and action packed. I on the other hand, as anyone who knows me or reads my blog would know, am about as sporty as a snail on sleeping pills.
The email came through, we would be going to Woburn Safari Park (huzzah!) we would be doing Go Ape at said Safari Park (monkeys? double huzzah!) a meal out (always good) and snowboarding at the snowdome in Milton Keynes (ah shit)
As it turned out the Oxford contingent of the hen party all decided against the snowdome for various reasons so I breathed easily. 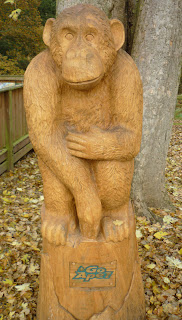 
I then actually bothered to look up what Go Ape was, it wasn't as I had thought a fun time going round the monkey house of the safari park, no it was actually a fun time climbing,swinging and zip wiring through the forest canopy. 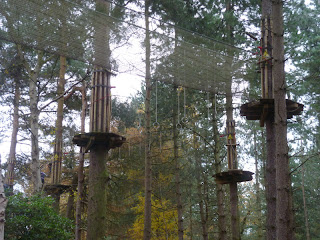 This was bad, this was very bad, not because I have anything against climbing and swinging per se but because I can't do heights.
Every once in a while I try to do heights just to see if the overwhelming dizzying panic has gone but usually it ends with me having a panic attack stuck rigid unable to go up or down and I accept that the vertigo is still very much there!

Thankfully I was able to drop out of the experience 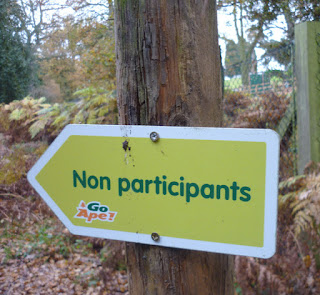 but still participate by walking round the course and taking lots and lots of pictures of the rest of the girls in action. 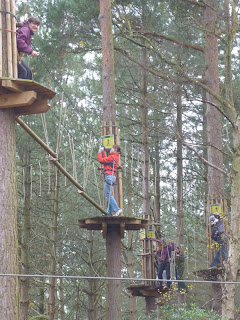 It was a bit chilly but great fun and as it was within the safari park I got to see, buffalo, zebras, giraffes, monkeys, sea lions and ELEPHANTS!!!!!

I was very excited about the elephants.

Afterwards we headed into Milton Keynes for a meal which on the one hand was a bit of a disaster, (it took an hour and 15 minutes to just to get our starters!?!) but on the other was a brilliant (good company, good conversation and when it eventually arrived the food wasn't bad either.) A Brucey bonus was due to the ridiculous time delay we also got a 50% reduction on the bill. Result!

I have got one frock to share with you. I finally got a couple of pictures of my harvest festival dress, not the greatest shots, I got caught out by the timer but it was by far the most flattering picture so that is why I have used it, vain creature that I am! 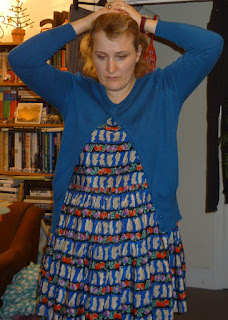 I love the pleated skirt. 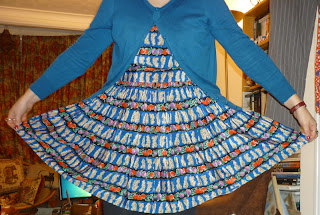 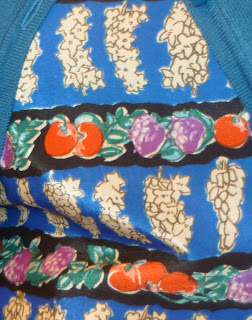 The good news is due to being a bit more well behaved with my diet it is now a bit too big, thankfully not enough for me to stop wearing it though!!
Posted by Miss Magpie at 14:09