Oh what a glorious sight to finally see the sun in the sky and feel a bit of warmth on your skin after months and months of snow, ice and bitter cold winds. I'm wondering whether I dare to get out in the garden tomorrow and begin the long task ahead of me of getting it into shape after the disaster that was last summer. Hmm 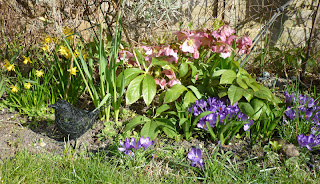 I bought myself this wire blackbird last week and constantly think it is a real one when I see it out of the corner of my eye! I think he will finally end up with the pots on my patio but at the moment he's enjoying the spring flowers as much as I.
I must confess to lots of quirky ornaments around my garden, they aren't for everyone but I'm not one for regimented formal flowerbeds. I like being surprised by something you wouldn't expect to see in the garden! 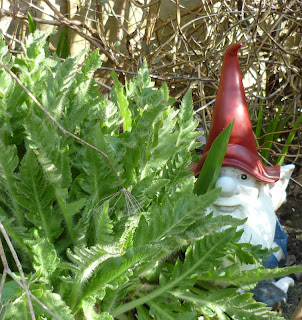 Gardening Law states No garden is complete without a gnome.

Forgive me father for I have sinned.

You all know where this is going don't you?

First thing that caught my eye was a pair of purple Converse for not at all a bad price. Now I need more Converse like a hole in the head but they were a delicious shade of purple, I love purple it's a colour I wear often and I always get complimented when I do.

So yes, to cut a long story short I bought another pair of Converse. Behold in all their glory my new shoes. 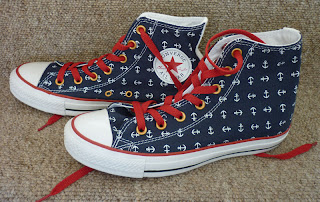 Ha, fooled you! they're not purple are they? This is because as I was doing the 'can I justify this purchase?' pros and cons argument in my head I idly clicked the

Seriously, how is a girl with a nautical obsession meant to resist navy blue and red Converse WITH ANCHORS ON THEM???

Not at all is the answer to that question of course.

On the plus side they were also in the sale but unfortunately they were a great deal more expensive than the purple ones.
Do I care?
Do I have one ounce of guilt for spending the money?
No, nah. nada, they are mine now and that is that *happy sigh*

In the sort of ying to balance the happy shoe yang I had my hair cut and coloured today. I only wanted a trim, my hairdresser (see sister in law) disagreed, my current length didn't suit me and my face shape apparently. Now this is where your hairdresser being your relative goes badly wrong I think.
If I were in a salon she would have to do what I wanted whether she thought it suited me or not, I could also complain if I wasn't happy without fear of causing family rifts of world war three proportions.

Anyway much disgruntled she suggested cutting more layers into my hair if I *must* keep it longer and set to with the scissors.....

All I can say is I currently have the hairstyle of a 1970's footballer, Kevin Keegan to be precise. 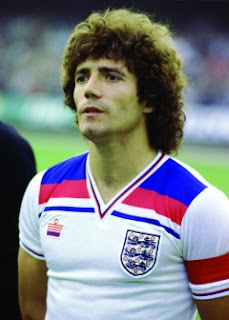 Imagine if you can bear to, the above style but in blonde much finer and more frizzy hair. Yup it's pretty bad isn't it?
The problem I have now is that because my hair has been much abused over the years, it has been left dry, fine and fragile.
It also grows very, very slowly, currently it's at the rate of one inch per millennium.
All of which means gritting my teeth and putting up with it until it grows out a bit could be a very long time.

The other option, and the one I suspect is my sister in laws nefarious plan behind the said footballers haircut, is to have it cut much shorter.

In some ways this is not a bad thing in that a pixie cut suits me and I've loved it whenever I have had one before. It's just I didn't want one again right now and it takes me so damn long to grow it out.