Birthday Celebrations by the Sea.

As mentioned in my last post we were at the coast for Himself's birthday last Friday.
Before we left went to see the new Star Trek film, which was ok, much too long and not as enjoyable as the first one, though thumbs up to Benedict Cumberbatch who was a magnificent villain.

Friday morn I presented Himself with his presents. It was a big birthday and he had steadfastly refused a party, going out or going away so I came up with the (at the time) magnificent idea of buying him 40 presents for his 40th.
If only I would have known just how damn hard, and just how expensive that would prove to be!

I figured for me it would have been to easy, you know tons of nail polishes and other biddy bits, but for a bloke, and one who just goes right out and buys things when he wants them irrespective of whether it's a week before his birthday/christmas/etc or not, well it proved to be a nightmare and it nearly broke me.

I started a few months early and was quickly just over 20 gifts so I got blaze, I was well on the way and had ages to go.......... Suddenly I found myself with 10 days to go and about 15 gifts still to find......FUUUUUUUCK.
Let me tell you that man of mine ended up with wine, lots of bags of sweets and the 40th gift was a box of Jaffa cakes!!
As a quick overview I got him a couple of shirts, t-shirts, some award wining vodka, The Avengers on Blu Ray, Star Wars books, various lego mini figures, commissioned him some Star Wars dog tags and an anniversary bracelet, a vintage traveling wash case and tickets to the 40th anniversary of The Rocky Horror Show.
By the time he got through opening that lot we had to rush for our train so we ended up taking the breakfast bottle of Fizz and drinking it en route from plastic cups! We are all about the class, oh yes. 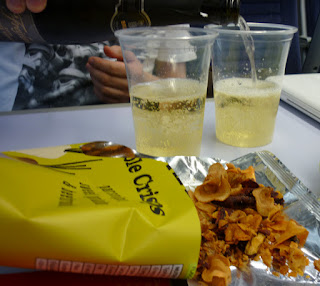 Margate was as wet and windy as anticipated, though it suddenly cleared when I had to head out to meet my sister for which I was very grateful. 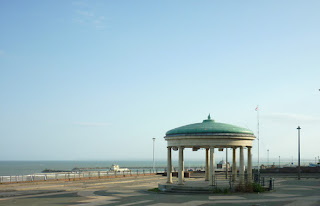 It looks glorious right? sadly it didn't last. Gabs and I had a great night. I finally got to give her her birthday gifts too (only 2 months late!) and take her out for dinner. We both ate lamb and drank some more fizz, bliss.
Next day it was my friend Kay's birthday so whilst Himself went to catch up with his old boss I delivered some more presents and spent the day drinking oceans of tea, eating cake and talking nineteen to the dozen while the rain hammered down outside.
I got back to the in laws just in time to get changed and head out for dinner as it had also been Himself's Dad's birthday that week too!
We ate delicious Italian food and then battled through the driving rain to the nearest pub for more liquid celebrations.

Sunday we went out for breakfast with one of Himself's best friends before collecting our bags and moseying to the station via the Old Town to see how much of an effect being a Mary Portas pilot town has had on Margate.
It was heartening to see a fab new pub/bar and loads of other little shops that have opened in the last 6 months in that area.
It really is vibrant and buzzing, with vintage and independent shops, galleries and of course across the road the new Turner gallery. 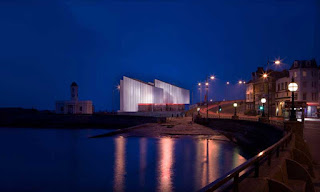 Not the most attractive building but it's certainly pulling the visitors in.

Sadly the rest of the high street is still a mess and until they sort out the run down seafront I don't think things will ever go back to how they were even when I first started visiting 15 odd years ago. Back then I can remember having to stand all the way down because the train was so packed with families loaded with sandwiches, towels, buckets and spades.
I truly hope they get the retro theme park idea for the old Dreamland site going (http://www.dreamlandmargate.com), though as the years go by it seems doomed to wallow in red tape and never get off the ground. It would be the making of the seafront and the resurrection of Margate.
Posted by Miss Magpie at 16:22