That Was Another Bank Holiday Just There.

and my my it was gloriously sunny AGAIN!!! 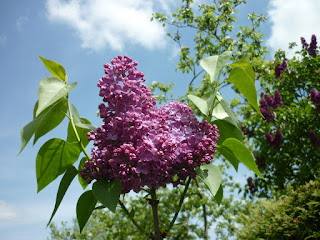 This does not bode well for the summer....

I have been meaning to blog all last week but haven't, I've been a bit 'Meh' really. Now as a rule I don't put any faith in horoscopes and rarely read them unless for amusement, but on the train coming home tonight I had nothing new to read, so re-read my magazine including the horoscopes. For once they summed it up perfectly in one line 'You're a bit out of kilter in general' Yup that is about the size of it, I just feel out of kilter and unable to focus.

I had a lovely long weekend due to the bank holiday and spent most of it restlessly half doing things but not being able to finish anything, half watching tv or half reading, then getting up and pacing aimlessly about. Now that for me IS bad, not even being able to focus my attention on a book for any length of time, very bad.
Mind you on Sunday I was trying to read outside and the neighbours next door but one had music on outside so fucking loud I was forced to go inside, and then forced to put on my I-Pod full blast because I could STILL hear it!?! Nice to have such considerate neighbours isn't it *sigh*

I did a bit of housework, I kind of did a bit of sewing, I even did a bit of gardening but just couldn't settle. I've been like this for over a week now and I have no idea why Hmmm.
(It has to be said I was slightly more focused last night at 11.30pm when I noticed we had mould growing in the bedroom wardrobe!?!&%*£! which of course I couldn't just go to bed and ignore. Picture much cursing and swearing and the delicious aroma of bleach to eventually fall asleep too.)

There have been highlights of course. I was out at Fire and Stone for Thursday night 'All pizzas £6' with the girls and what an absolute tonic for the soul all that laughter and gossip was.

Turns out 3 of us are all due to be aunties within weeks of each other later in the year!
One of us has moved in with her beau and is in that blissful glowy stage (I just about remember that!)
One of us has a new job (huzzah) which does mean her moving away (boo hoo)
and I am being sent to Chicago for a conference in July.

So yes America here I come, sadly I only get one full day of tourist time then it is full on presentations a go-go for 4 whole days, starting at 8.30am every morning and ending at 5.30pm every evening
*weeps*
We do get a cruise on Lake Michigan with fireworks one night which should be fun and I get to go with my Amsterdam partner in crime Paull which means I fully expect us to get bollocked about our expenses again when we get back!
I just need to figure out just how much I can cram into one day as a tourist, Chicago is a big place and it's not nearly enough time to do it any kind of justice.

Just to emphasize before I sign off how bad my inertia is, I bought this glorious sunny yellow vintage frock the other week and I haven't even tried it on yet, just can't get up the enthusiasm. 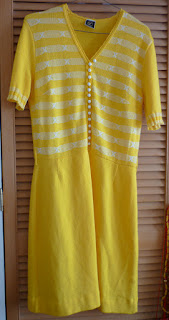 I am most definitely out of kilter.