Today I Ran Away to the Circus.

Ok it was actually yesterday but I was too tired to write this last night and ended up sitting outside wrapped in a tartan blanket drinking beer and annoying Himself by talking at him when he was trying to watch things on his laptop.

I had another couple of days off work (can you tell the end of my leave year at work is coming up? Use it or lose it so I'm using it thank you.)

I had the dentist on Thursday morn. Thankfully all was well, the dentist said "hmm the last time you had an x-ray was December 2011" so I said "yes for THE tooth" and he went "Oh yes! THE tooth, how's it holding up? everything alright?" "Oh yes, fine thank you" says I "Well keep looking after it" he says. "I shall, I never EVER want to go through that again" I reply and then he proceeds to tell me many tooth based horror stories as I edge desperately towards the door and freedom.

Mostly we go to the dentist en famille as we have all been registered there for nearly 30 years now but Thursday it was just me and Pops (he hates it when I call him that hehe)
He has a cracked tooth that needs a filling and never has an injection when he has work done, he just sits there and takes it, he's mental!
Poor Mum was at a funeral for one of the lady's from her Age Concern group, kind of an occupational hazzard when you work with the elderly but no less distressing. So we decided to take her out to lunch.
We went and collected her and took her to a little place on the industrial estate in the village they live in called The Picnic Hamper. I know that doesn't sound very glamorous but it's fitted out to look like a diner inside and the food is all home made and delicious.
From there we went back to my parents house, I had a tour round their garden, Mum's pride and joy. 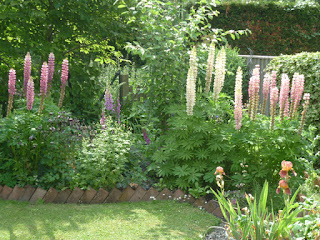 I think you can see where I get my gardening genes from!

Look what we spotted. 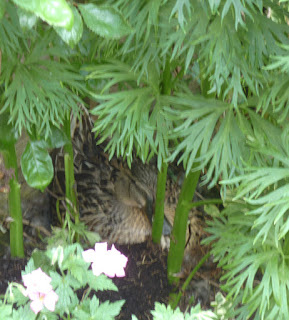 Mum's latest wild animal to be nursed back to health was Esme the duck who is sitting there on a nest of 10 eggs. Mum was gobsmacked, she had been knee deep in the flowerbed the day before weeding and there was no trace of a nest then. It has to be said whilst Esme might be a quick nest builder she is a terrible mother, she has had 11 ducklings already and lost the lot.

Now I did kind of have plans for my day
*but*
my Mum is a do-er, an organiser, a woman of action and before Dad or I quite knew it, our day was mapped out.
First we went the house of one of my Mum's Age Concern ladies Peggy to drop in some stuff. She has the kind of garden that makes you weep with joy, whether you are a gardener or not.
It's absolutely stunning and she does it all herself aged 90! I just hope I am still as agile and able to enjoy pottering in my garden when I am her age.

From there to a garden centre (where of course I bought a few bargain bits) and then back to my parents house before finally ending up at my brother's. I eventually got in at about 7.30pm having spent most of the day in the back of my parents car, to be honest it was like being trapped in some BBC sitcom and not at all the plans I had made for my day off work.

and yes I know this has nothing to do with the circus, so on to that part of my tale.....

This is what Dad and I spotted as we drove to pick Mum up for lunch. 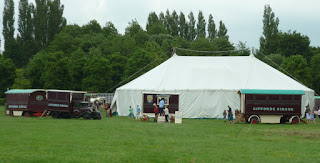 Gifford's Circus on the village green. Somehow I had managed to forget when it was they were due and as you know from previous blogs I am a big fan. A sign said 'Box Office open' so Dad and I swerved off the road and bought some spur of the moment tickets for Friday afternoon.

After a trip out to Dunelm Mill where I wasn't going to buy anything and ended up with 2 lampshades we headed to the circus.

This year's show is called Lucky 13 and was about Transylvanian gypsies arriving to join the circus. As ever it was pure magic and the highlights for me were of course the bear. (I know I have blogged before of how I was laughing so much at the bear I couldn't stop and everyone was staring at me.)

He did not disappoint, this year doing Michael Jackson's Billie Jean dance, moonwalk and all before shoving the magician into a cabinet and sawing him in half. 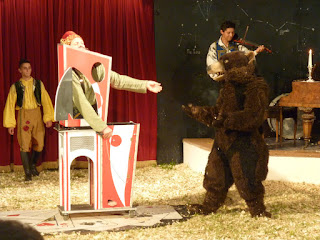 The other was the acrobats at the end, who were so mindblowingly good I'm afraid some very less than ladylike language came out of my mouth whilst watching! 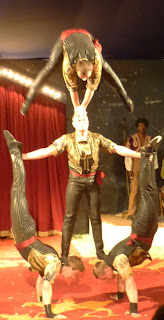 At one point all 4 were standing one on top of the others shoulders with the top guy then somehow turning himself upside down and balancing on the next guy down's head with one hand!?! How can you not exclaim?
I really must train myself to say 'Good Heavens' or 'I Say!' rather than 'Whoa! jesus christ! look at that!' and 'Fuuuuck!' most undignified, especially when out with the parents.


It was all over too soon, I wish I had taken more pictures but you get so caught up in the show you forget.

The bonus of the day was when a member of the audience got called onto the stage and I realised it was a friend I haven't seen in over 2 years. It was so lovely to have a quick chat with him and his wife after the show, the result being we are going out for a drink and a proper catch up very soon.

What did I wear to the circus? 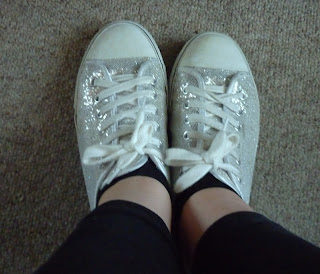 Silver sneakers and a Pearl Lowe chiffon tea dress, what else? 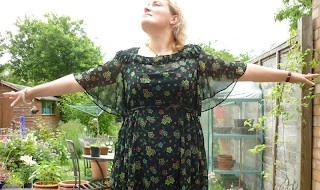