With a Bowler Hat and a Salty Seadog.

Dammit I was going to Blog last weekend and somehow it never came about, clearly I am destined to be a once a week kind of a gal.

I had a couple of extra days off work when we got back from Torquay which meant I got to trundle into town and ransack the charity shops. I came back with a dress, a cardigan, a mini pig (pottery not real) and an egg cup,I bet you can tell from that list I gave them no mercy.

I also went to the real shops and bought some solar lights for the garden. I always forget to bring mine in in the winter so inevitably they rust up and stop working. As it happened they were on a special offer so I ended up buying some little blue stars to go on the fence too. 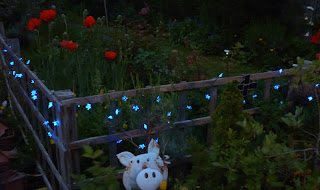 I liked them so much I went back on saturday and bought some more! Overkill? a bit twee? who cares? I am thrilled with them and their lovely blue twinklyness.

I spent the rest of the weekend pottering about and even tackled some of my giant sewing mountain (steady now) whilst waiting patiently for the new Poirot on TV.

I also ended up washing 50 million hairdressing towels as my brother's washing machine had a nervous breakdown in the middle of a cycle which meant said brother arrived in a foul mood with 3 laundry bags of sopping wet towels in various stages of cleanliness.

Monday I was back at work and instead of having a sensible week as planned I managed to go to bed after midnight nearly every night!?!
Once was due to going out with friends, once was due to going out to see Nephew Number One's end of college show (at the O2 Academy in Oxford no less!)
The rest was down to the TV making me wallow in 70's nostalgia with 3 programmes on The Eagles and one on Agnetha from ABBA.(Why they felt they had to show all these programmes so late I will never know! Grr)

I have to say fascinating as it was, I was put off The Eagles documentary by the fact Don Henley seems to have morphed in to my much hated ex-boss, the likeness was truly uncanny to the point I ended up looking away whenever he was interviewed because I couldn't bear to see him and just listening instead!
All this resulted in my wimping out early from the end of year barbeque at work last night and going to bed with a book before 9pm, SO rock and roll.

Without further ado let me showcase my latest purchases.

I hope you are all sitting down because there is an outfit shot!!!

I decided to channel a little Eddie Izzard after seeing him last week. 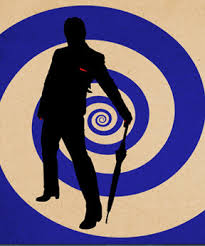 so this in me in my £2 bargain dress and hat that I love and Himself doesn't because according to him it looks like the kind an old lady would wear to a funeral. 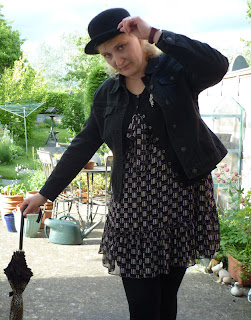 It was actually wet and windy that day hence the umbrella and hat but of course the sun had to shine the moment I got the camera out. I also managed to cut my legs off because I didn't stand far enough back for the picture, oh well. 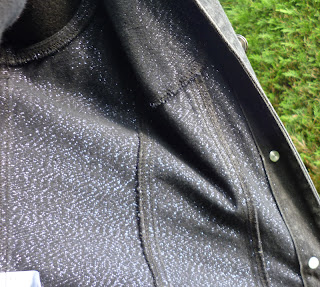 The black denim jacket I have had for years. I forgot all about it and then found it again during the mould in wardrobe saga, I have been wearing it ever since. I love it because it has purple glittery lurex woven into it! 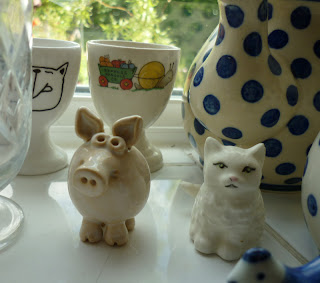 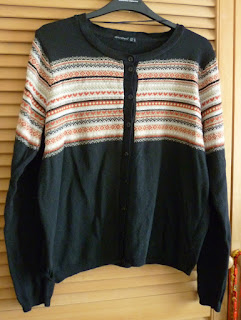 and now to the tale of the salty seadog.

It all started one day in June when the department store that is Debenhams had a sale. As I had vouchers I went along, mostly to look at the handbags. I need a new one for work but I am very particular about my work handbags so it is always a saga trying to find one.

I ended up buying a pair of 3/4 length jeans and this purple parrot broach. 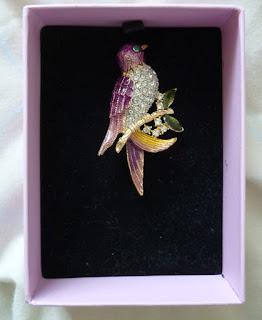 As I am a fan of the designer Henry Holland I nipped up the escalator to womens wear just to have a quick look at the Henry Holland concession. I'm not really meant to be spending money on clothes but no harm in looking right? Well the minute I saw this jumper I knew without a fragment of doubt it had to be mine. It was in the sale too, so even better. It makes me very happy. 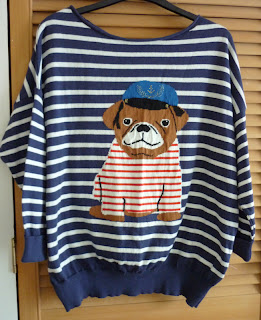 I shall end with the orphan elephant I bought in Torquay. Himself was on his eternal quest for new trainers in TK Maxx and I spotted this poor chap for £2. He has lost a tusk and his tail, but is still handsome in my eyes. 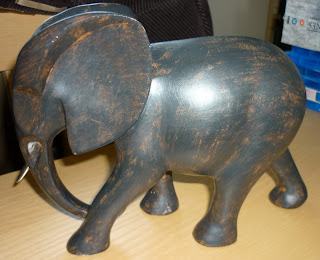 He's now happy in his new home at the front of one of my flowerbeds.

Huzzah for elephants and bulldogs in breton tops and sailor's hats says I.