A Grand Day Out and The Thin White Duke.

This could be a very picture heavy post but I am forcing myself to keep it light.
On Saturday Himself and I got up at a ridiculously early time for a weekend and headed off to Bristol for the day to do the Gromit Unleashed Trail.
As seems to be my luck when I plan these outings, we got to the station and our train was cancelled with no explanation. With a sinking sense of deja vu we finally got on a train wedged to the rafters with people and spent an uncomfortable hour pressed up against the door in the vestibule. It was Easter weekend all over again!
Eventually we got to Bristol and with our blue trail map clutched in hand ticked the first Gromit off the map. 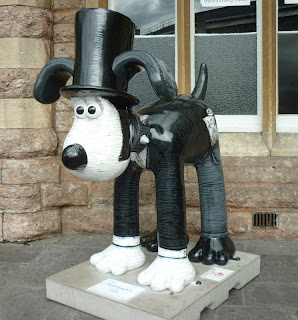 'Isambark Kingdog Brunel'
We had a fantastic day out and what a gorgeous city Bristol is. We walked for about 7 hours all in, and covered everywhere from the docks to the shopping centre, the cathedral to the BBC Bristol offices. We saw 45 of the 79 Gromits dotted around Bristol and the surrounding area. Not bad going really and a great way to get around a city. 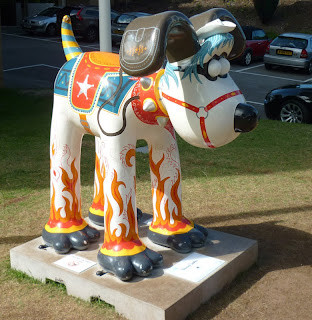 The statues were either outside or just inside various buildings, a very clever way to get people to go into the museums and galleries and then maybe stay and look round. (Though I suspect Harvey Nichols were rather horrified at all the not quite of our class of people trooping through their store!) 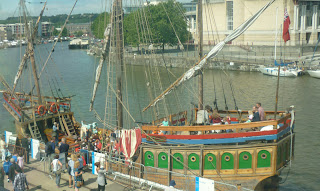 We spotted the one on this amazing old ship from across the other side of the water and then had to figure out how the hell to get over to take a picture. Talking of pictures we did find it amusing how terribly British everyone was politely queuing and waiting their turn to take their pictures!
There was no pushing, no shoving, no dashing in. Everyone took their turn and there were a lot of people at every statue.
Bristol was packed with people and just about every one of them was clutching a blue map. 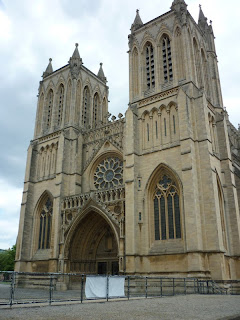 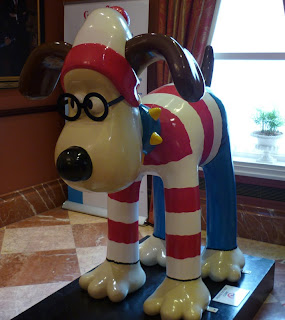 We gatecrashed a hotel with a wedding going on to find Where's Wally. 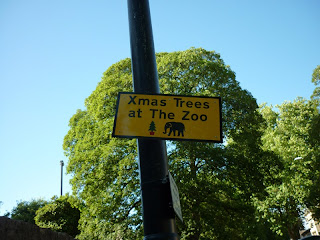 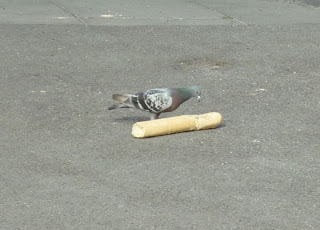 and saw a pigeon wielding a baguette like a lightsabre (typically it stopped when I got the camera out!)
Our final Gromit was Vincent Van Dog 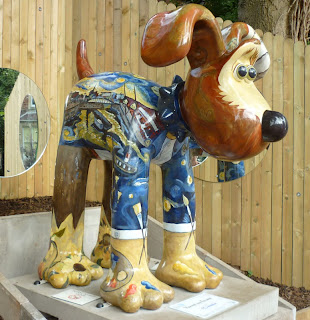 By this time we were footsore and in need of refreshment. We retired to Wetherspoons for a much needed drink or 3 then only just managed to catch our train home, phew.
All in all a grand day out as Wallace would say.

Yesterday we headed out to the cinema with Soo to see the exclusive live screening of 'David Bowie is happening now' from the Victoria and Albert Museum. 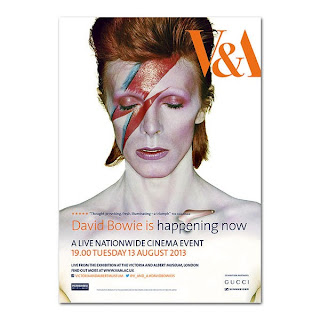 Soo and I were both desperate to see the exhibition but didn't manage to get tickets. It sold out within hours and has been the V&A's most successful exhibition ever with 330,000 visitors. If anything all this screening did was made me even more frustrated not to have seen the exhibition and been able to browse round it at my leisure. I'm not a huge Bowie fan or anything but I do find him fascinating and this exhibition did not disappoint.

It was incredible to hear just how many people that very first appearance of Ziggy Stardust on Top of the Pops in 1972 affected and influenced. You can only begin to imagine what it must of been like, to watch colour tv, for pretty much the first time in your life, and see this glittering catsuited creature with the exotic bright make-up and hair singing at you, directly at you.
Parents were horrified and teenagers suddenly found meaning. A life changing moment.

I did find it amusing how they glossed over the 80's, quick glimpse of the Ashes to Ashes peirrot costume and that was your lot.

Himself and I agreed it could have done with more words from the man himself but other than that it was all good.

The V&A commissioned a piece of art work for the exhibition and much to their surprise the artist came back with the Periodic Table of Bowie. Inspired. 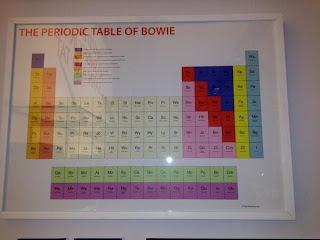 It lists the people who influenced him and the people he has influenced. I have to say I loved it so much I went to their online shop and ordered myself one!