Downtown Eat Your Heart Out.

Yesterday I took a day off work and went out with Jenny and Soo for an adventure.

I was in need of some quality time with my best friends, it has been a tough week. The thing that hit me the hardest was visiting my friend Murray in hospital on Thursday.
He is very sick, I didn't even recognise him when I walked in, it just breaks my heart.

That among other things have really had me thinking about life and making the most of it, not having regrets and not taking my health for granted.

So yes, I was in need of the opportunity to talk, hear advice and have a damn good laugh.

We decided to check out Lydiard House and Park 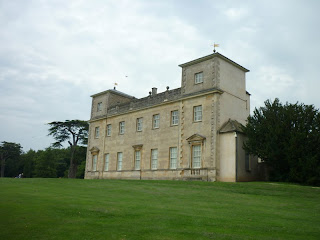 The house has been wonderfully renovated by a local trust after falling into such disrepair that even the army decided it was too dilapidated when it was requisitioned during the war! Instead they built nissan huts in the grounds. It was interesting to read of it's history first as a U.S.A.A.F hospital and then prisoner of war camp up until 1948.

The park is open to the public for free and it was heartening to see it packed with families enjoying the balmy weather. You are so used to hearing about kids lounging in the house all day whilst their parents ignore them these days.

In terms of a stately home Lydiard is fairly small, but my life what a family the Bolingbrokes were!

I said they could make a tv show out of it all but Jenny pointed out it would more than likely be dismissed as being too far fetched to be believed.
We are talking getting drunk and accidentally killing someone in a duel, getting drunk and accidentally killing your best friend, getting drunk and insulting a king (don't know about you but I see a pattern forming here.)
Bringing in the local blacksmith's daughter as your housekeeper and next thing she's lady of the manor. Marrying one wife then bringing in the second to live with you and fathering two children to her whilst the first is still alive..... Finally, the most shocking, being married with 2 children but having another 4 kids on the side with your own sister!?! 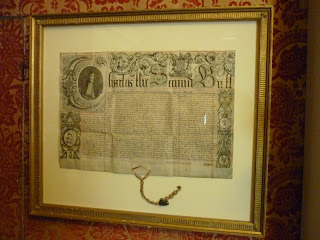 The actual Royal Pardon that was issued to the viscount who accidentally shot someone in a duel whilst he was drunk. (How do you do that??)

The rooms were set up to reflect life in different eras in the house and this was further illustrated with the use of waxworks that scared the bejesus out of me every single time even though I knew they were there!
This is seriously the most sinister waxwork ever, look at that face *shudder* 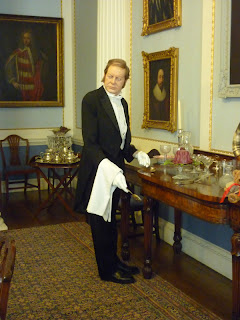 Mind you have you ever seen a waxwork with a comb over who looks like he is about to break into some music hall ditty on the spoons?

I found the whole place fascinating, I loved all the wonderful family portraits going through the ages  and all the personal bits and pieces that made it feel like a family home.

(Not that they are a family I would want to be part of judging by their history!)

As you know I always seem to find an elephant somewhere and this was no exception. Behold this funny looking chap embroidered on the 17th century bedding as copied from the stained glass window in the chapel. 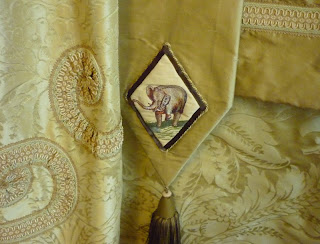 We went from the house to the renovated walled garden, which had been the pride and joy of Harry Love the head gardener (the best name for a gardener ever.) 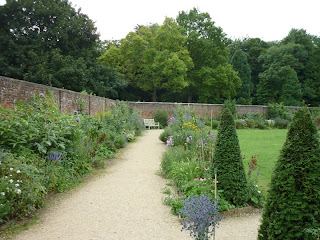 It was absolutely gorgeous and refurbed with the help of a lottery grant. According to the lady volunteers in the house the local scouts used to pitch their tents there up until that point.

To just go off at a tangent one of the ladies had the same hairstyle, glasses and accent of Billie Whitelaw in Hot Fuzz. It made it very hard to take in what she was saying as I just kept picturing her in the film! 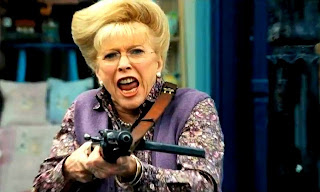 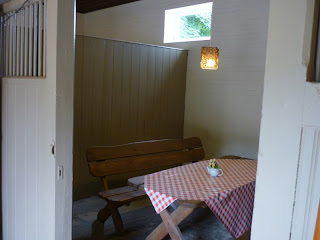 not being a horsey kind of person quite frankly this is the best use for a stable I can think of!

The sandwich board outside declared all the various types of hot and cold food they served so we discussed, chose and queued up, got to the counter, placed the order only to be told "We have no food left".
We expressed polite incredulity to be told very defensively "We've been very busy"
No shit Sherlock, it's a bank holiday weekend! Surely the thing to do is to take the boards in when you have run out of food hmm?

False advertising and all that.

Apparently there was another cafe up in the woods that was bigger and usually had more food.
The weird thing was, that there is a conference centre at the house and the entrance is directly opposite the stable cafe and it also had boards outside it announcing things like cream teas and hot snacks but that wasn't suggested as an alternative, clearly there was some manner of rivalry going on!

We decided we couldn't be arsed to walk all the way 'up in the woods' so we went to the conference centre instead.

We were greeted warmly at reception which was a good start  so Soo asked if we could have a cream tea as advertised outside. The lady looked perplexed, she didn't think they were serving food as they "had a big wedding on the next day so none of the kitchen staff were in, she would go and ask the duty manager" and off she disappeared whilst we looked at each other with 'seriously, WTF?' faces.

Now admittedly I've never worked in catering, but surely if you have a big wedding on your kitchen staff would be in and busy prepping on the day before?

We waited for about 10 minutes and were making noises about going when a veritable angel of a lady who had clearly been roped into serving us some food, appeared. There was no hot food but she could make us some sandwiches. It took a while but my goodness were they well worth the wait., absolutely delicious!

Fed and watered we headed back to the house to sign out the key for the church for a quick look see before the whole place closed. It's a grade one listed building partly due to it's medieval wall and ceiling paintings, 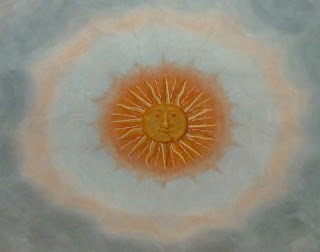 I particularly loved this sun painted way, way up on the ceiling.  How happy is he?

All in all a great day out, I'd definitely go back.

Once I got home, I cooked and scarffed dinner, packed a bag and headed over to my Mum and Dad's as today was our annual trek to the Stonor Park craft fair. 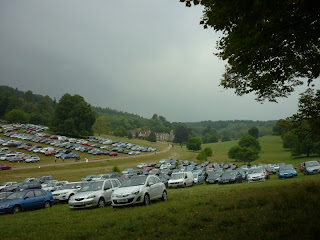 As you can see the weather was not playing ball today so we didn't linger as long as in previous years but I still bagged a treasure or two before we dashed back to the car. 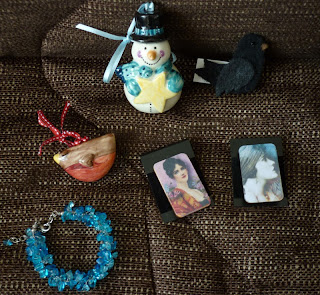 Three brooches, a bracelet and two decorations for the christmas tree! 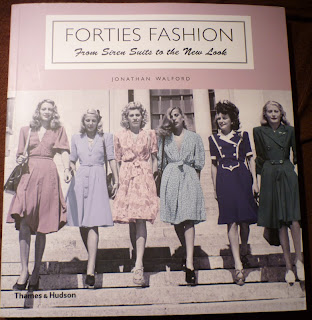 I'm really looking forward to reading it properly have dipped in on the train home.