Been doing a bit of navel gazing this week mostly due to having been incredibly ill last week and to the doctors on the Friday. It was one of those give with one hand but take with the other situations.

I knew I had lost weight before I went and I was generally feeling pretty good about stuff.
Yes the weight loss I have achieved so far is great, keep up the good work etc. However now it would appear I have high blood pressure, it was high last visit apparently (though they didn't tell me at the time) and it was still high this visit.

The irony is when I was 'overweight' my blood pressure had always been exactly on the average reading. I lose weight and bingo up it rockets *SIGH*

Before you all tell me it's a coincidence, I know it's a coincidence, and quite frankly a predestined one at that. Blood pressure-wise I was always on borrowed time, High pressure is hereditary and lucky me it runs in the family on both sides, so no escape. It was only a matter of time.
I am pissed off about it though. I don't feel ready for this, I don't feel old enough for a start!
Fuck it I should be a pensioner before I get bloody high blood pressure? surely??

Anyway enough of the outraged pity party, I'll get my head around it and what I need to do to keep as healthy as I can.

I have a very busy August ahead of me. This coming weekend we are off to Bristol to see the Gromits (as in Wallace and Gromit) on the Gromit Unleashed Trail
I'm very excited about that and about visiting Bristol as I have never been there before.

Next week Himself, Soo and I are off to the cinema to see the live screening from the David Bowie Exhibition at the V&A. More exciting stuff!

Next weekend we are off to Margate to visit family and whilst Himself is off doing his own thing with his mates, my sister, my friend Kay and myself are going to What a Vintage Carry On

That is followed by the Bank Holiday weekend when I go to the annual Stonor Park Craft Fair.

Finally we have The Rocky Horror Show at the end of the month. The 40th anniversary tour and the tickets were one of Himself's 40th birthday presents so it was meant to be.

Lots to look forward too.

Also I didn't mention that Soo had been over and we did a trawl of the charity shops. I bought a few bits and pieces including this lovely jumper 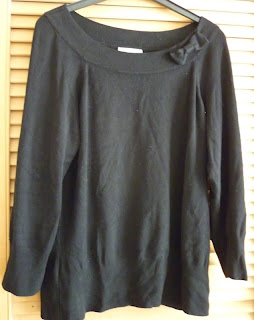 and a childish picture of a donkey for my wall of Kitsch. Vix may have her wall of misery but I have my Kitsch Kitchen! 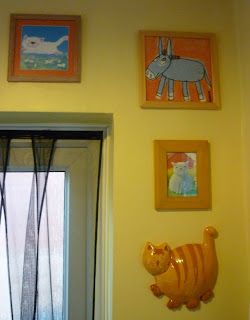