I've Looked At Life From All Sides Now,

So as it turned out our visitor had a last minute change of plans and wasn’t able to visit after all. This meant, in theory I got to move all my stuff straight back into the front bedroom but true to my word I decided to have a thorough sort through first. It was a kind of grey showery weekend so instead of going outside to garden I stayed in and de-cluttered instead.
It never ceases to amaze me how tiring it can be, it’s not like I was hefting heavy stuff around or anything, mostly I was sat on my bum with a drawer or box on my lap going through the contents, but after 5 or 6 hours I was knackered. I suppose, especially with personal stuff and paperwork that you have to concentrate on, it can be emotionally and mentally draining.Well that's my excuse anyway.

By Sunday evening the job was pretty much done. The room is still full of my stuff, no fear of me ever going minimalist! But I did have a satisfying 1 sack for charity, 2 sacks of recycling and 2 bags of rubbish.
I found a hilarious old picture of my brother and some equally bad ones of me, including my college i.d which showed me with my ‘Total Eclipse of the Heart’ Bonnie Tyler haircut. Yes people I actually took the album into the salon and asked to have my hair ‘like that please’!

My underwear drawer is also in the front bedroom and I did that thing of finding a really pretty bra at the back of the drawer and thinking ’How lovely, why do I not wear this??’ I duly put on said bra the following morning and trotted off to work.

By the time I got home I knew EXACTLY why the bra had been consigned to the back of the drawer!
Now only another woman (or man, if that is what floats his boat) who has ever spent the day in a really uncomfortable bra can know the sheer, utter, joyous relief of whipping that baby off the minute you have shut your front door behind you. This time round it is going to wing it’s way to Oxfam (who have a wonderful charitable scheme for unwanted bras) and most definitely NOT going back into the drawer. 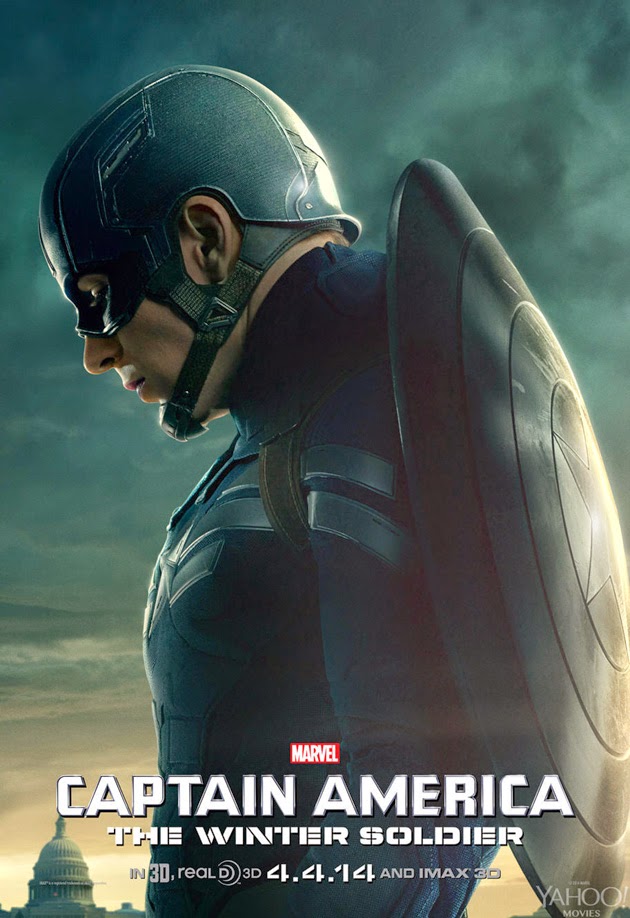 I did take some time out to go and see 'Captain America – The Winter Soldier' on Saturday. It was good, but not really my cup of tea. Strange really when you think how much I loved the first film. 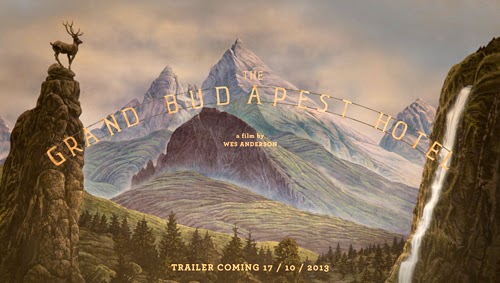 We also went to see The Grand Budapest Hotel before it closed. I did enjoy it, and Ralph Fiennes is just amazing in it.

Actually it's been a busy week  because I also went out with friends to try the ‘New’ menu at the pub opposite the station. It turns out the new menu is basically just the old one but with all the less popular choices taken off it!
I stuck with the good old Macaroni cheese and garlic bread. They also do a very decent house white for £8.99 a bottle, it would have been rude not too have that too.
Sadly no extreme wood sports on the big screens this time round, which was probably a good job as we were busy chatting, though we did get interrupted by the table next to us asking us for answers to questions on the pub quiz! Could they tell just from appearances that we were all ex-librarians?

Friday night we were double booked with drinks with Melissa and Dan to celebrate their engagement (I can safely say I don't think I have been so thrilled about an engagement since my own.) and Nephew Number One playing a support slot at the O2 in Oxford.
We managed to skillfully juggle both by finely tuning our times, this meant joining Melissa and Dan for a swift couple of beers first, then dashing up the Cowley Road to see the Nephew before dashing back for more beer before catching the train home.
All in all a cracking night and I am now the owner of some rather splendid beer glasses (that we christened tonight with a bottle of fizz.)
I loved them for their shape, basically they are giant Babycham glasses and Himself loved them because they said 'La Trappe' on the side (The Trap is a Northern term for the toilet.) 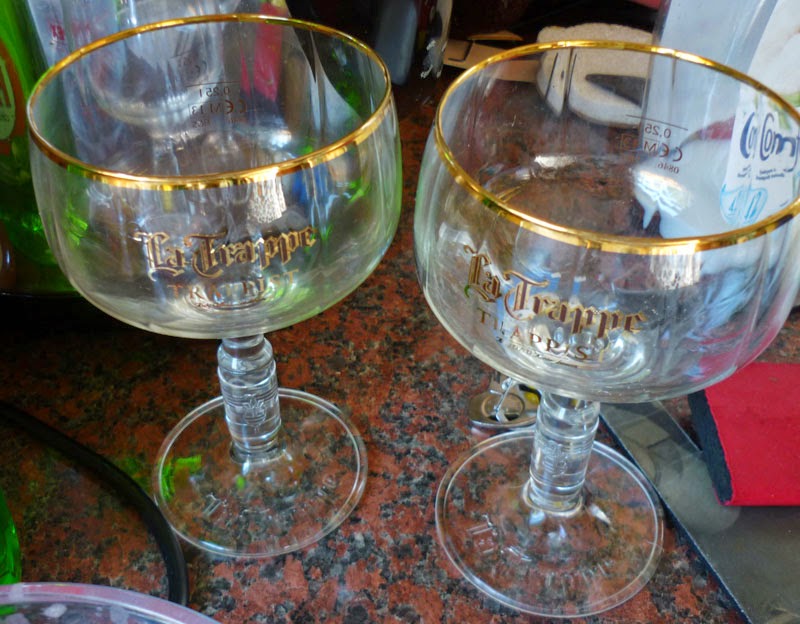 I know this may offend some but I'm afraid I have no compunction about re-purposing a beer glass if I like the look of it.

This week I also shortened the chain on the magnificent necklace I mentioned last week, here it is in all it's stupendously mad glory. 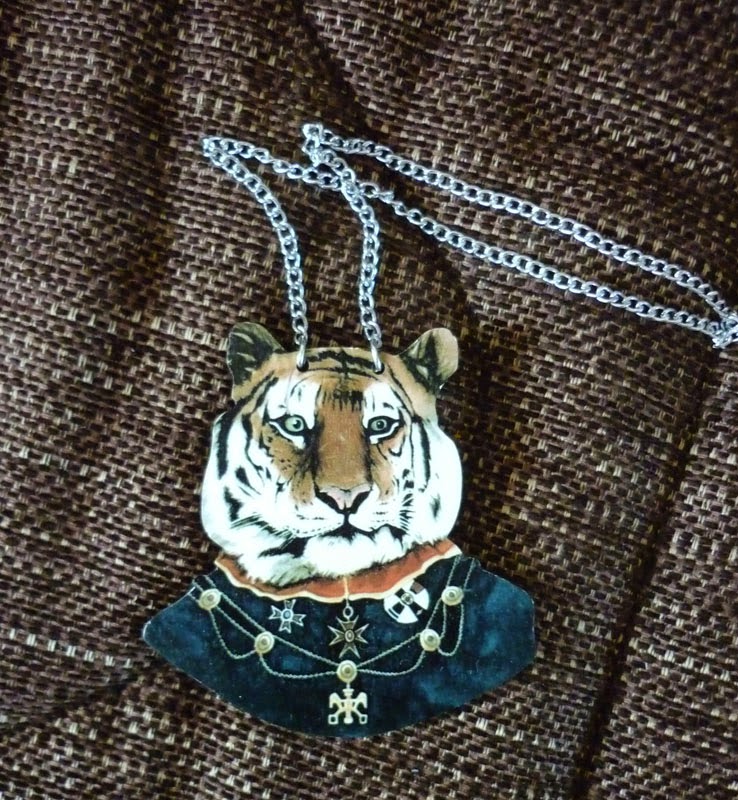 I've had a great week but today I am in a funk, I found out my Alexander Technique teacher died just before Christmas and it has knocked me, I knew she was ill but I hadn't realised how serious it was this time, well that's not strictly true, lets just say I didn't want to accept how bad it was, but dreaded it must be because I hadn't heard from her in a few months.

I had been working with her for about 15 years and she was just one of the most wonderful people you could wish to know.
So damn lovely, and life just kept throwing crap at her, including a very rare form of cancer, and yet I only saw her downhearted twice despite it all.
Somehow she always managed to see some good and turn things to the positive, I hate that she is gone and I shall miss her.

It really makes you realise you really should grab every moment and live life to the full, a lesson that was brought home to me twice more this week.
Once by hearing an ex-colleague of about my age had had a stroke, and then by chatting last night with my brother's best friend Mark who has just thankfully recovered from a 4th round of heart surgery.
He said my brother worries more about him than he does about himself!
They can't really fix his heart and he knows the next time could well be the last, and that that next time could be at any moment, amazingly he isn't at all scared, in fact he was incredibly chilled, at peace with life and himself, he said he has made the decision to just live every minute to the max so if his heart does stop he won't have wasted a moment.
It certainly makes you reassess, think about wasted time and the luck of the draw when it comes to things like health.The fact that right now I have good health and yet I have got very lazy again and am eating too much of the wrong stuff again, I have gained weight again etc.

Time to jump back on the wagon and grab those reins.....

First stop to soothe my soul, (and help my waistline) was doing some hard graft in the garden yesterday. The veggie patch is 3/4 dug and mulched and strawberries, peas, onions and potatoes are planted.

Today I plan to get out there and start tackling the flowerbeds. I also need to find some decent small branches to bring in the house to decorate for Easter. One of my Mum's traditions that I love.