Last Friday I went with my colleagues Alex and Charlotte to visit Highgate Cemetery.

I was very excited I have wanted to go for the longest time but for some reason Himself was not up for the trip (and him an ex-goth/death metal fan!)
I mentioned it in passing at work and Alex said she too had wanted to go for ages so why didn't we? Why indeed?
We consulted Charlotte who grew up in London on how to get there and as she hadn't been since she was a teenager when they used to sneak in at night said and would love to come too, so tickets for the West Cemetery were purchased forthwith.

We had a lovely lunch at Ally's Kitchen in Archway before heading to the cemetery to join our guided tour. The West side is only available to view on a tour and I have to say it was well worth every penny. We had a fantastic tour guide and the time just flew by in this truly magical place.

To give you an idea, when Highgate West Cemetery opened in 1839 it was a vast open manicured space with a beautiful cedar  of Lebanon in it's centre. 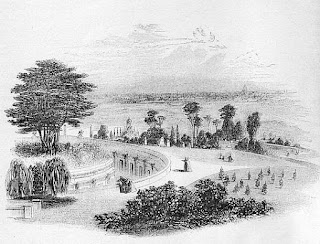 It's almost impossible to get your head around this fact when you are walking round, because the Highgate of today is like a forest with graves in it! 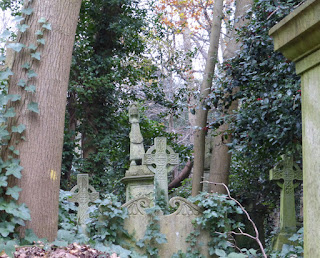 Earlier this century Highgate fell into disrepair and was destined to further decay until the Friends of Highgate stepped in in the 1970's taking almost total control on the early 80's and starting a vast and ongoing programme of restoration and protection. The trees are all self seeded from this time of decay and the friends decided to leave them and only remove any that were dead, dying or dangerous. What they have created is a space that is sensitive to not just it's purpose as a cemetery but also as a nature sanctuary. There are bird boxes and bat boxes and wood piles for the hedgehogs, foxes and bugs.
We didn't see any foxes though we heard them, it's quite common to see them as they aren't too bothered by people apparently. We did get followed on most of our tour by a magpie no doubt hoping for someone to share a snack!

The West Cemetery is far more overgrown but has less famous people buried than the East Cemetery which is open to all. You can only go through on a tour because you would be liable at best to get lost but at worst fall down one of the various huge holes hidden by the foliage!
Amazingly the cedar tree is still right there in the centre. 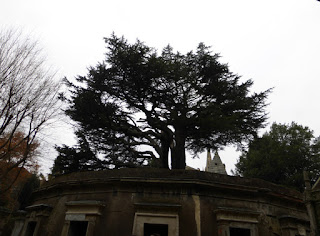 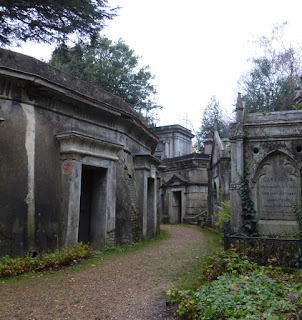 This leads to the Terrace Catacombs which I have to say is the only place that had an unpleasant atmosphere, frankly I could not wait to get away from there, very strange. More so when Alex admitted on the way home she had felt the same!

At the top was Nero. How gorgeous is he? The monument to George Wombwell who owned a menagerie 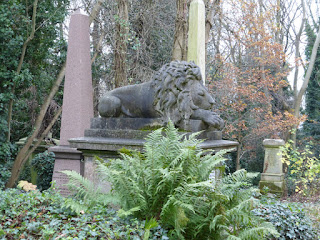 The symbolism was fascinating, urns to represent the soul, lilies for chastity and innocence to name just two and of course angels. Lots of beautiful angels. 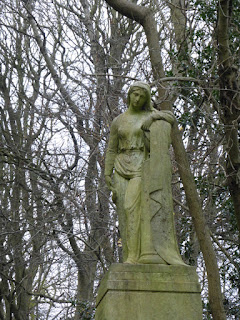 Sadly it was too cold and too late for us to visit the East Cemetery as well, it was already getting dark, something to do in the spring I think. 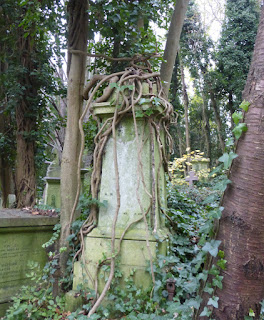 Just one of the many examples of nature and how amazing she is, literally growing out of stone.

I would strongly recommend a visit if you get the chance, just remember 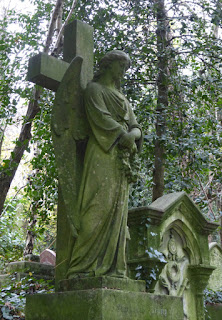