All That Monkey Business.

So July is not only my birthday it's my Mum's as well and 26 years ago my brother wisely got married on my Mum's birthday joking it was so he would never forget his anniversary!
As it happens it was also the day of my mystery birthday outing. I had told my friends and family that there wasn't anything I wanted or needed for my birthday (let's face it when it comes to having lots of stuff I pretty much own the rights) so I would rather do things and create memories.
I have to say this is where I have been truly blown away by just how thoughtful, kind and amazing these people are.

As you know from the previous post Himself took me out to Eltham Palace as well as buying me a new CD /tape deck (old school!!) and some other lovely bits and pieces.
My Brother and Sister in Law have treated to me to an Alice in Wonderland themed afternoon tea in London which they presented to me the day before my birthday when we all gathered to take my Dad out for lunch.
As it was another hot day we all met at Dad's care home, slathered him in sun cream and took turns to push his wheel chair into town. We have a Prezzo in town so the whole family gathered there and stuffed our faces before then pushing Dad round the new bit of the shopping Centre. I think Himself pretty much ended up guarding Dad as we all disappeared off in various directions as we spotted things in shops. My Nan always joked our family needs a sheepdog to round us up when we get together!
Anyway we ended up in the M&S food hall where my brother kept piling snacks and treats onto my Dad's lap until he had all but disappeared!
It was such a lovely day and the good news is we called in at the mobility shop and it seems there is a motor system that is compatible with my Dad's huge chair which once fitted will make pushing it a breeze (it's pretty hilly around here) so trips like this can happen more often and Mum can even take him out on her own.

The fun just kept on going because on my Mum's birthday my sister in law arrived to collect us to head out for my birthday surprise from Mum. Nephew Number One and his girlfriend were already in the car so I let Himself sit in the back with them! My brother then arrived driving my Mum's car with her and my cousin and his wife who were visiting from Germany inside, and we were off.

It was a very scenic route to our destination as we went via Stonehenge because my cousin has always wanted to see it! As it happens our only view of it was from the road as we were slightly horrified to find it was £5 per car to park and £20 per person to see the stones and there was also a massive queue. We borrowed the facilities bought a drink and headed off again.

Up until this point I had no idea where we were going but as soon as I saw Bournemouth on the road signs I had an inkling and when we turned off for Bere Regis I knew for sure.

I love monkeys almost as much as I love elephants but I've never yet been to Monkey World as it's too off the beaten track if you don't have a car. I love the TV show and especially enjoy watching it with my Dad, in fact I had watched an old episode that Sunday about collecting an orphaned orangutan called Mimi from Russia and settling this terrified little thing in to the Orangutan Nursery so imagine how it felt to actually see her in the flesh charging around and playing happily. 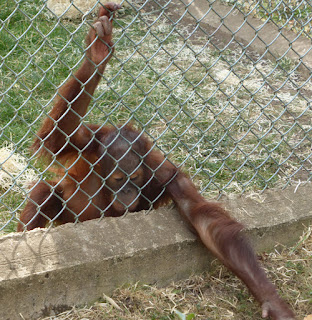 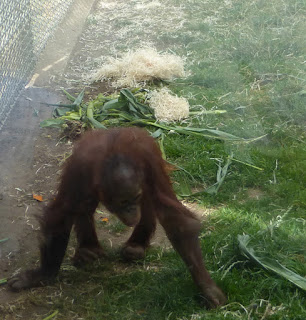 I'm getting ahead of myself though! We arrived at lunch time so first stop was the cafe as we were all gasping for a drink. I was then informed I had an hour and a half before we had to be back at the gates. So we had a wander and watched one of the groups of chimps being fed 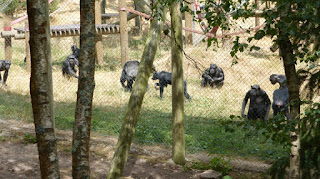 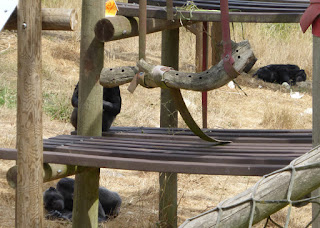 We arrived back at the gates for 2pm and it turned out the next part of my treat was a personal tour of the park. It was amazing, our guide was so interesting and answered our millions of questions.
At one point we were passed by a guy in shorts, DMs and a band t-shirt, sporting a shaved head, tattoos and earrings he paused from pushing his wheelbarrow to make a joke or two at our guide's expense so of course we just assumed he was another one of the many staff, only with hindsight he didn't have on the Monkey World polo shirt they all did. Once he had passed our guide said " Do you know who that was?" when we all said no he casually said "Jeremy the owner!"

Monkey World really is an amazing place, it's not a zoo, it's a rescue centre and my word does it wrench your heart when you hear story after story of the terrible, horrific things these poor creatures went through before finding peace and safety here.

From the capuchins who came from a medical lab in Chile with the tiny metal cage on show outside their huge leafy enclosure to show the solitary, claustrophobic space these very sociable creatures had been forced to live in 24 hours a day.
To the Orangutan who had been forced to wear human clothes and shoes and only knew how to walk painfully upright on her poor deformed feet.
Or the one armed chimp who had been bought by a family on a night out at the circus who were so horrified to see her trying to perform with a gangrenous arm they bought her and took her straight to a local hospital where a surgeon agreed to help and managed to amputate the arm and save her life.

It broke my heart to hear that most of the chimps were rescued from beaches where they were used for tourist photos. To get just one baby chimp they kill on average 13 adults as they live in family groups and the whole group will try desperately to save the baby. Once stolen the baby will first have it's teeth pulled out so it can't bite the tourists then it will be drugged to keep it docile finally it will be dressed in human clothes. After a few years of this abuse they get too big and too strong, so many got put on a boat and taken out to sea where they are just thrown in because chimps can't swim. 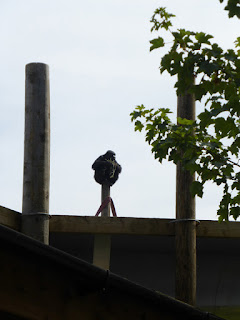 Due mainly to the work of Monkey World chimps have now been banned on beaches in Spain and Greece. You do still get them elsewhere though, Mexico for example, so they are still working tirelessly to get more countries to ban the practice.
Your mind just boggles at man's inhumanity.

In captivity a chimp or orangutan's lifespan is similar to ours, on average 50-60 years. There was one enclosure of 'Old Gents' none of whom were under 30! So as our guide pointed out they have to constantly think and plan long term to ensure long and happy lives in comfortable surroundings with plenty of food and water.

Monkey World is also part of a world wide breeding programme for woolly monkeys and orangutans. There are 18 woolly monkeys and apparently that is 2/3 of the world's captive population, just think about that for a moment, that is just how endangered they are!

There were a couple of babies who were so cute! 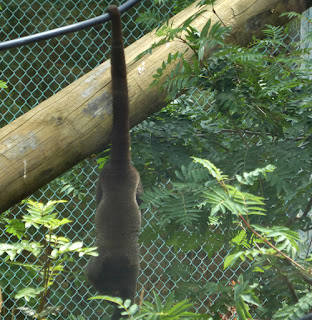 There is actually one clinging to it's Mum's tummy in this picture, poor thing.

Our tour finished at the memorial to Jim Cronin one of the park's founders. From there we went to Malagasy enclosure which is full of ring tailed lemurs which are one of my favourites. 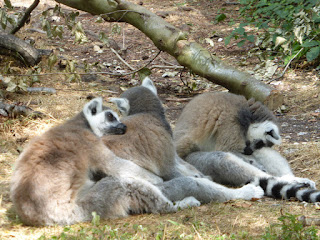 As you can see even they were finding it too hot! After a blissful wander round this enclosure we headed out for another much needed refreshment break.

We walked slowly back through the park for a quick browse around the shop before heading off for the final treat of the day, dinner at Chez Fred in Westbourne an award winning fish and chip restaurant that is always fully booked.
We met my Sister in Law Caron's parents there as they live in Westbourne which was a lovely surprise. After eating our fill (they do unlimited chips!) we headed back to their flat for cake and prosecco then took a stroll down to the beach before heading home. 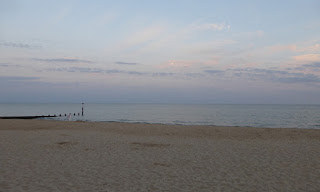 I can't begin to say how much I enjoyed my day out such an amazing and thoughtful gift.
Posted by Miss Magpie at 12:54