July Purchases and the Last of my Birthday Treats.

So following my epic day out at Monkey World I got up early on the last Saturday of July to meet with Soo for another mystery day out with the only proviso I didn't need my walking boots!
She took the scenic route to our friend Jenny's house in the hope of throwing me off the scent (though as ever I did have to remind her the final turning)
Once there we got to ooh and ahh over Jenny's marvelous new kitchen and have a good catch up over a cup of tea before it was time to head out to yet another secret destination. This turned out to be the nearby town of Highworth where we browsed a few charity shops before Jenny announced she needed the toilet and we would just nip in here... 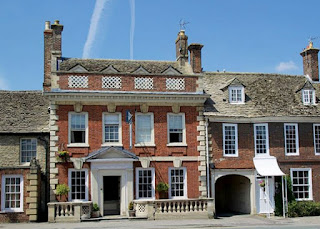 because it would be fine, no one would notice we were just in and out for the loo and besides she knew where they were.
Now I will admit I have been know to use a similar level of brazenness when I've been desperate,needs must and all that, but I've tended not to go for somewhere quite so smart looking. Anyway we trotted faithfully after her and made use of the facilities then instead of turning right towards the exit she swerved left and announced to a member of staff we had a table booked for afternoon tea. I will admit I was not expecting that and they got me good and proper! 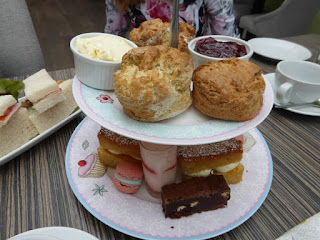 Tea was delicious and it was so lovely to just be left to our own devices and not hurried along. Though they might have regretted that as there was much exclaiming and howling with laughter as often seems to be the case when we get together!

Jenny excelled herself by making me one of those photobooks with various pictures of us all from over the 30 plus years of our friendship. That had me completely gone, in pain and properly crying with laughter. Some of those pictures...my hair, my clothes, but especially my hair, dear god what was I thinking.
What a wonderful way to wrap up the birthday month (see what I did there??) 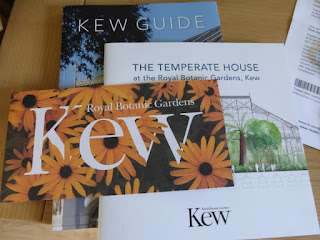 Two tickets for Kew Gardens which I'm ashamed to say I have never been too before what with me being such a keen gardener and all. My friends are the best.

So did I shop in July?? you bet I did! There were sales still going after all. As ever I was poised for the Collectif sale and as ever I bought a trio of dresses. Sadly they didn't have anything I liked in my favourite style so I ended up with 3 halterneck dresses. 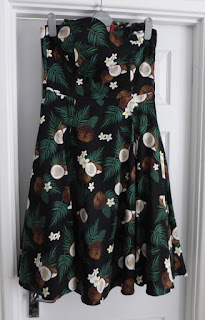 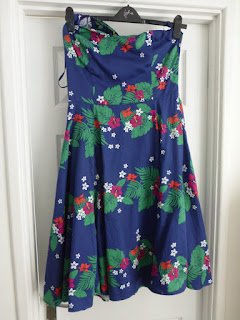 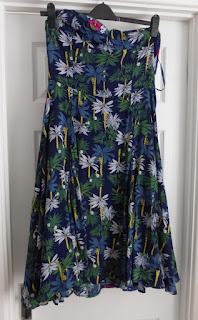 The coconut print one is destined to be my annual Bournemouth night out frock.

I also bought a couple of dresses from Dolly and Dotty. This new academic year will see me doing more interviewing, more long haul but short stay travelling (boo) and more evening events, so with this in mind I bought these two dresses. 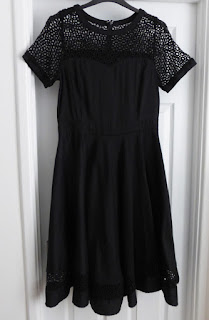 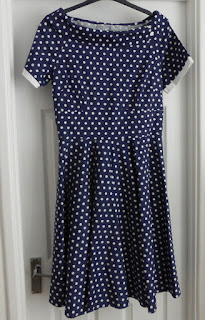 In fact I liked the black one so much when I got an email with a 50% off voucher last week I also bought it in green! (Not that I'm sure they will fit me any more right now after all the food and drink I've been putting away lately!!)

This is the shirt I spotted in the window of H& M when we were out with Dad which had me nipping off through the doors before anyone could stop me. 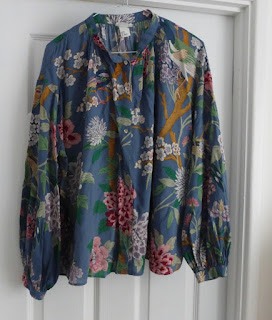 I also bought this one in the sale because you have to browse the sale rail,once you are in a shop right? As well as another blue one which is in the wash. 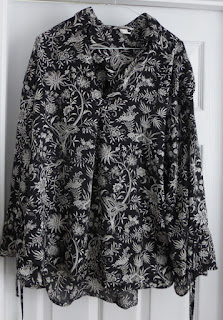 Finally I may have just stepped into Debenhams when their blue cross sale was on and being a magpie by name and nature may also just have homed in like an exocet missile to the jewellery counter. 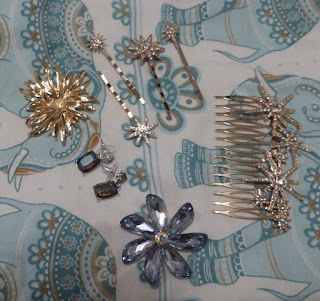 Finally I wanted to share with you the after pictures of the bag I posted about last month that I bought on Ebay for restoration. 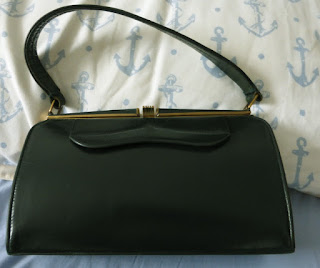 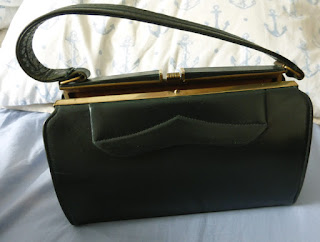 The green shoe cream and a bit of elbow grease worked wonders, and a great deal more elbow grease and carefully applied Bar Keepers Friend brought the metalwork back to it's former glory. Finally seven needles and one stabbed thumb later the handle is reattached, not my neatest work but that doesn't bother me I'm thrilled to bits with it. 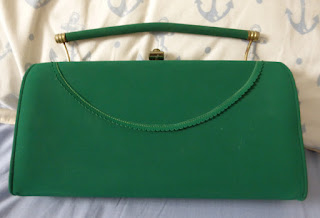 Isn't it gorgeous? You can always rely on another handbag collector, especially one with an eye as good as Ann's, when it comes to spotting a beauty. I just don't know how she could bear to give it away!
Posted by Miss Magpie at 09:57