In my excitement writing about the Chelsea Flower show I completely forgot to mention I had my second face to face physio appointment towards the end of September, 2 months after the last with it's scary prognosis. Since then I had been doing my exercises like a crazy woman and it seemed that had paid off!

Not only was my physiotherapist surprised with my progress she said there was definitely no need to refer me back to the fracture clinic for a procedure, which as you can imagine was fantastic news as far as I was concerned. She also told me she had resigned and would be leaving at the end of October. It seems even the staff are fed up with being forced to do at least 60% of their appointments as phone consultations. She did say if that policy changed she would probably come back. Unfortunately my next appointment was cancelled and then I had to wait for another slot, after 3 weeks of ringing on a Monday to find nothing was available I finally got one on the 24th November! I shan't go over again how farcical I have found all of this...

Anyway I left with a new set of (why do they have to be so painful) exercises feeling very positive.

I started October by going to see the new James Bond my first cinema trip since 2019. We deliberately waited a few weeks for the initial rush to die down, I didn't fancy going to a completely packed cinema on my first visit back. We were the only people to wear masks the whole time SIGH. I loved the film though, it was good to be back. 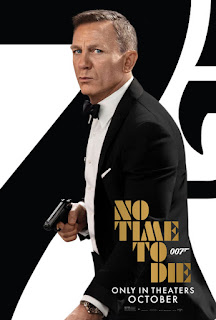 The following weekend I was off into Oxford to meet my friends Alex and Charlotte to celebrate Charlotte's birthday. We took a slow stroll down to the botanical gardens where we wandered about enjoying the Autumn colours before finding a bench in the sun and having a good catch up. From there we headed to Comptoir Libanais where we had a table booked for lunch, after which we had a browse around Blackwell's bookshop and the indoor market before heading for home. 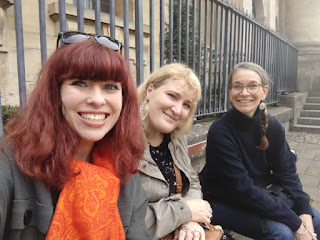 It was so lovely to see them both. I miss Alex not living in Oxford anymore, and I really miss not working with them both anymore.

Charlotte and I met again the following Wednesday to head up to London for my first live exhibition since 2019. It was certainly a month of firsts!

We chose The Fashion and Textile Museum's exhibition Beautiful People: The Boutique in 60's Counterculture and boy was it good to be back. We had timed entry and got there a bit early so had a mooch around the neighbouring streets until it was time to go in. It wasn't very busy and everyone was in masks so you felt quite comfortable browsing at leisure. 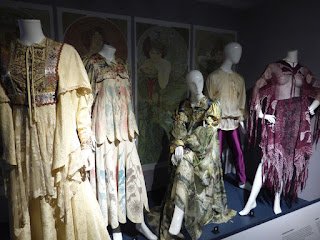 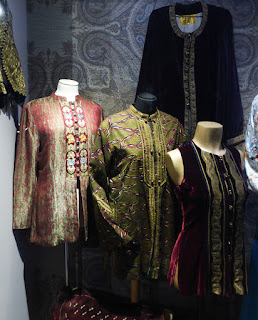 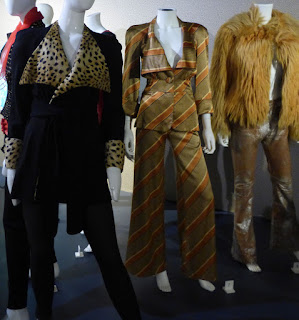 I won't share all my pictures but we had a great time. Charlotte's Mum was clearly quite the fashion plate and there were a couple of the Quant and Biba outfits or prints Charlotte recognised, she can remember her Mum taking her to Biba when she was tiny.

For me it was more about recognising the styles. My Mum was a seamstress before she married my Dad so made all her own clothes, many from patterns she drafted herself from things she saw in magazines. 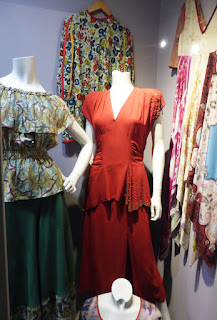 or based on a 1930's pattern like this green and black one, or the floral one below, or reusing genuine 1930's fabric like the jacket next to it.. 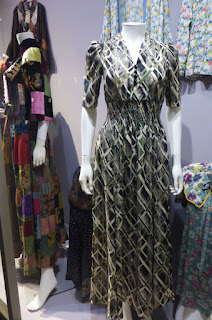 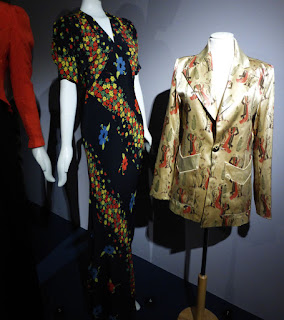 I really do have my era lol.

I have to share this outfit which made me I gasp in recognition when I saw it. I have seen several times on a Friday evening when I tend to watch those compilation music shows on BBC4 like 'Glam Rock at the BBC' with a large glass of wine. It was donated by the lead singer of the New York Dolls and he wore it on the Old Grey Whistle Test to sing Jet Boy! 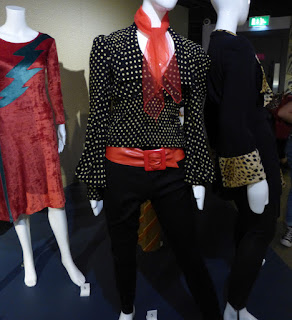 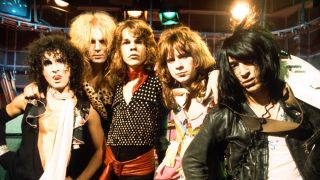 After we had had our fill of amazing outfits, we had a browse round the shop and I treated myself to a book, I'd rather buy it full price there where I know the money will go towards the museum itself than cheaper on Amazon or the like. 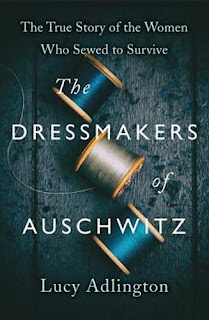 It's called The Dressmakers of Auschwitz and I really wanted to read it after listening to one of the Museum's fascinating online events given by the author Lucy Adlington.

I know I've mentioned them before but do check out their website for their on demand events, they are amazing, cover so many different subjects and eras, and only cost £5. I've watched loads of them now and thoroughly enjoyed them all.

We headed to Borough Market for lunch and after we had filled out faces from some of the amazing food stalls we decided to walk along the Thames. We ended up keeping going all the way to Westminster trying to find somewhere to have a drink. We crossed Westminster bridge in the hope of something and finally ended up in the cafe in a branch of Waterstones.

The day was a little marred when we got back to Padington and I was told by the chap at the information desk I couldn't get a train home until after 7.30pm due to my off peak ticket!?! I was told I could upgrade it and as I didn't fancy hanging around at Padington for 3 hours I duly queued up to upgrade. When I got to the counter I thought I would just check again and thankfully it turned out the information I had been given wasn't strictly true. I could in fact catch a slow train to Reading and then a train home from there - Phew. Luckily I had a good book with me so I bought a drink in M&S and hopped on the slow train. 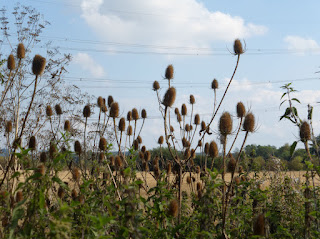 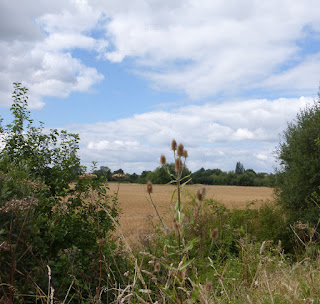 The next weekend as the weather was still mild Himself and I went for a long walk culminating in a large glass of wine for me and a pint for him sitting on a balcony over the Thames in the nearby town of Abingdon. We took a slightly different route this time and I was amazed to come out in a part of the town I didn't know walking alongside the river. I went to college in Abingdon many many moons ago and thought I knew the town well from all the times I was out and about instead of in lectures!

We also did a Halloween trail in a nearby village which is always great fun, some of the residents really go all out with their decorations 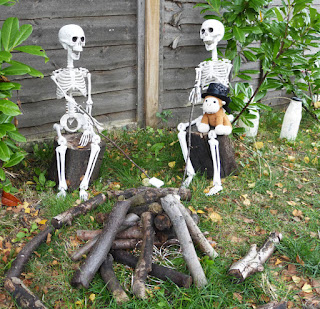 I took Malcolm Monkey and his funeral director's hat with us

The month ended with our anniversary or nonniverary as I believe Vix called it (24 year's on we are also not married.) We went to Nephew Number One's house for drinks on the 30th which ended up being very late as well as a rum experimentation so our actual anniversary day was very low key. 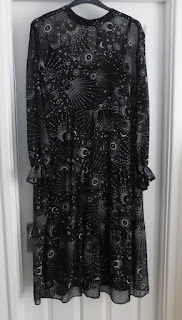 I'll finish up this rather mammoth post with some purchases. I bought another new zip free dress, partly because it was zip free but mostly because I loved the fabric. 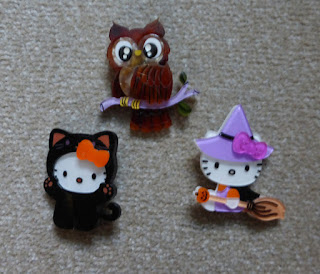