The Month of September - Part One.

So September started with our annual long weekend in Bournemouth. We stayed in a new to us B&B back up on the East Cliff which is our favourite side of the town to stay. The B&B turned out to be a turn of the centuary house and the former home of 50's matinee idol Stewart Granger. It must have had amazing gardens down to the cliff top back in the day but now it sits on a tiny plot dwarfed on all sides by massive modern hotels. It's probably a miracle it hadn't been torn down at some point. 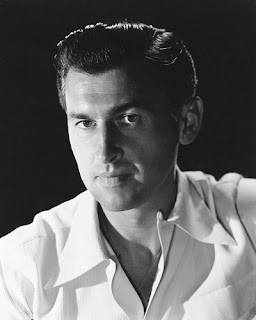 It only has about half a dozen rooms which suited us just fine. We were on the second floor, in the only room in use up there as the rest are currently being renovated which suited us even better. It was lovely and surprisingly spacious considering it was under the eaves of the roof. We soon settled in and headed out into the town.

We have a tradition now of mooching round the gardens and the shops, seeing what's new and sadly what has gone over the year since we were last there. Having a couple of drinks in the 4 Horsemen (which is now a 90's themed pub because of course we all need reminding that the 90's are long enough ago now to be a thing!?!) before going to Harry Ramsden's for take out chips to eat sitting on the beach as the sun goes down, then it's into the Tesco Local to buy a bottle of wine to either drink on the beach, or as it was drizzling and cold this year back at our B&B. 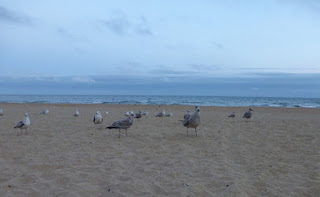 Can you tell we were eating chips?

Friday we had a walk planned. This year we had decided to walk from Shell Bay on Studland to Swanage via Old Harry Rocks. It's about 10 miles and is pretty much all National Trust owned land with some amazing scenery and surprisingly a naturists beach! I loved the fact the literature states "You may be the only person wearing clothes on this stretch of the walk." 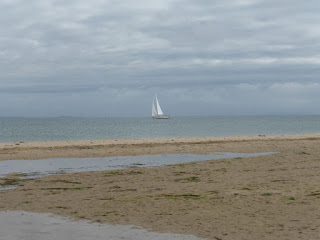 The weather was meant to be drizzly again but as it turns out by the time we got off the chain link ferry it was cloudy but otherwise warm. Perfect walking weather in fact, not too hot and not too sunny.

There were a surprising amount of people out walking though some of them did quickly turn back the way they came when they reached the signs for the naturists beach and they were greeted by several middle aged men striding about the beach wearing nothing but a smile. Personally I've never understood the attraction of being naked on a beach, I mean sand gets everywhere at the best of times, but each to their own.

There is an alternative path you can take through the sand dues if you want, but the more hardy/not so easily embarrassed hikers, us included, just kept to the waters edge and were soon on the next part of the walk. It was worth it for a different view of one of my favourite landmarks. 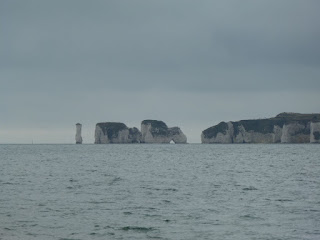 We got a little bit lost but eventually found our way back onto the right path and started the climb up to the top of the cliff above the rocks. Again there were a lot more people than I had expected. I gather in the summer it was very busy and they had had to post wardens up there to stop all the idiots taking cliff edge selfies after some people fell and were badly injured. There were none there in September but we did watch a few youngsters taking stupid risks just to get a picture. What is it with some people? That seems to be my mantra these days! 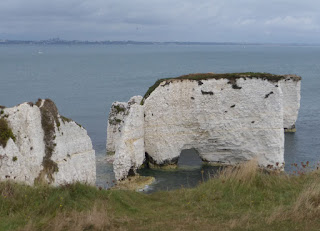 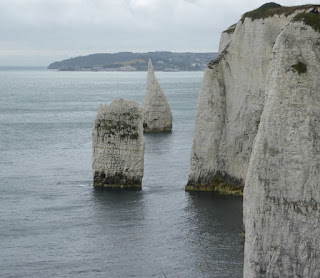 We took some safe pictures then carried on climbing up to the summit of the hill that then takes a long, narrow and sometimes hairy route down into Swanage. 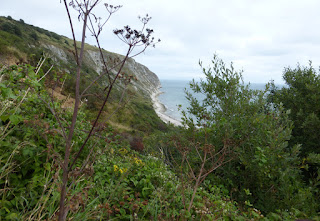 I love looking back where I have been. This was us about halfway down and yes we had walked all the way from the very edge of the land in the picture.

Swanage was as lovely as I remembered and it was so heartening to see a town centre with only 2 empty shop units. It was equally heartening to see so many of them being little independent shops too. We had a drink and some of the best gelato I've ever had in Fortes, a Gelateria opened in 1926. I had a scoop of black cherry & kirsh and one of  malt with crushed Maltesers which was to die for. We mooched around the town buying some bottles of local beer in a tiny deli, some homemade fudge for my Dad and an art print of Old Harry Rocks before catching the bus back to Bournemouth. We had ended up setting out a bit later than planned in the morning and the traffic was quite heavy on the way back, meaning we didn't have time to go back to the B&B and change before our table booking at the Harvester at Branksome Chine. I'm not a huge fan of Harvester restaurants as it goes but this one is right on the beach with views across the sea so it's a great place to have a drink. From there we called into Tesco for another bottle of wine before heading back to the B&B for a hot shower. Nothing like lounging in your PJ's drinking wine and watching Gardener's World instead of hitting the town.

Saturday I went off to meet my friend Alison for a day of antiquing and eating cake whilst Himself went off for a long walk (he was still doing his Route 66 challenge at that point so wanted to clock up a good 15 miles!). Alison and I had a fab day and ended up at a garden centre where I had to resist very hard becasue it's not so easy to take plants home on the train!

We were booked into an Italian restaurant we hadn't tried before that evening in a bit of the town we don't usually frequent as it's on the main stretch where all the hen & stag parties tend to go. The food was fine but not outstanding. From there we were going to take a taxi to Westbourne for a drink, in these covid times we are all about avoiding super crowded pubs but happened to pass a pub called The Anvil that had it's doors open and some great music playing. I know of The Anvil, Bournemouth's rock and metal venue but had never been in it before. In fact we thought it had closed because we had walked past the empty premises when we arrived, as it turns out it had simply moved down and across the street to a smaller venue. I persuaded Himself to check it out for one drink and of course we ended up staying in there all night. If nothing else they had a bottle of Deadman's Fingers banana rum behind the bar with my name on it!

At one point we were the only people in there, people seemed to come and go but it was not particularly busy until about midnight when the place suddenly filled to bursting. I'm assuming because it clearly had a late license. We took this as our cue to go and headed back to the B&B. I suspect we will be visiting it again now we know what it's like. If nothing else I need to investigate the jukebox further. 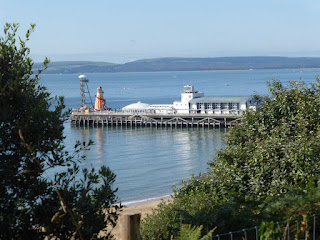 Typically on Sunday the weather was utterly glorious so we ended up wheeling our suitcases along the cliff path into town and sitting outside at the Aquarium cafe people watching until it was time for one last ice cream before the train home.

I took two new dresses with me as I am still having to avoid back zip fastenings which eliminates most of my wardrobe. I bought both of these online from an independent boutique called Jabba Yard. I can't remember how I first found them now, but I have bought a few things from them over the last couple of years and would definitely recommend the quality and service. 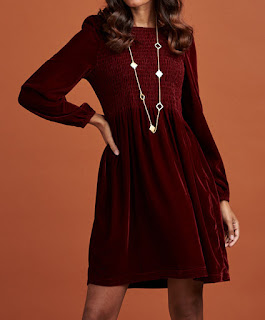 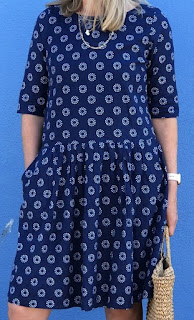 I've nicked the pictures from their website because it's dark right now so no good for pics at home even if I could be arsed to run upstairs and get them out of the wardrobe!

I wore the blue dress for my day out with Alison and the red velvet for our night out that evening. The blue one actually does have a back zip but the cut is loose enough that I could easily pull it on over my head and hurrah for pockets.

So that's September part one. I'll be back anon with The Chelsea Flower show and more.