My Autumn Break or a Long Weekend in Bournemouth.

We had a wonderful long weekend away in Bournemouth, our first holiday since Easter!
Boy was I ready for it, I just wish it could have been longer but I couldn't get any more time away from the new job.
The weather reports for the weekend were not great but I couldn't have cared less, I was going 'away' and to the seaside no less and that was all that mattered!
As it turned out the weather was perfect when we arrived on Thursday. We checked into the hotel and I shot straight into town and onto a bus to meet my friend Alison leaving Himself to his own devices, aren't I nice?
It was fab to catch up with Alison, eat a delicious cream tea (a tradition with us!) at a working water mill and farm. Here are the goats and pigs enjoying the afternoon sunshine 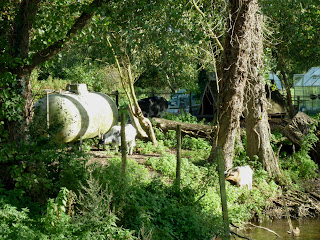 Then it was off to oooh and aah over her lovely new house with it's stunning garden. I also got to fuss some gorgeous cats both at the mill and at Alison's house.
I do miss having a kitty of my own sometimes.

I headed back into Bournemouth just in time for Himself and I to take a stroll along the beach to a beachside restaurant for dinner, what could be better? 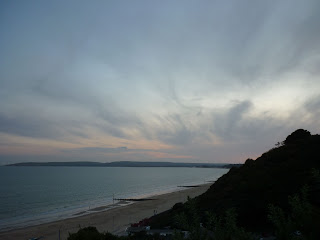 On the way back to the hotel we were joined by yet another very handsome four legged friend, it was obviously a day for cuddling gorgeous cats!
He followed us all the way along the promenade and up the winding cliff path, playing that cat game of hanging back, peeping round corners at you, then racing ahead only to sit and look all bored and unconcerned. I was worried he was well and truely lost what with being on the beach and everything but on checking his collar I found he was from one of the hotels on the clifftop and obviously knew the route well.Clearly he thought we were the ones who were lost and needed a guide back up to the top. 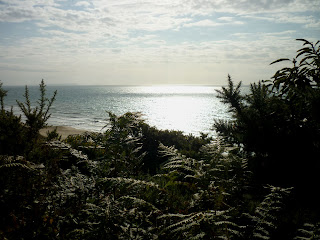 Friday was another beautiful day and after breakfast we decided to walk to Poole. It took longer than we thought and a somewhat more circular route than expected too, but it was worth it for the wonderful views along the way. 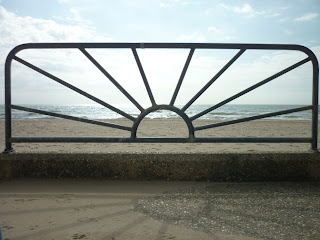 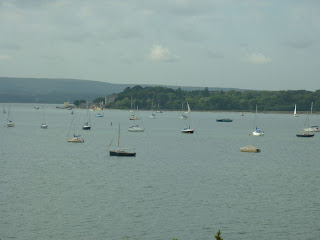 Brownsea Island as viewed from Sandybanks, no wonder millionaires choose to live here when you can get up to this view every day. 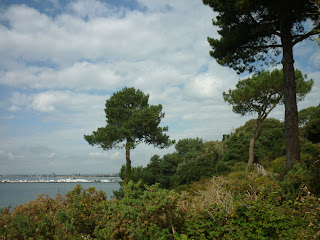 We finally arrived very hot and bothered and a bit footsore for a browse round the town. I dragged Himself into every charity shop (and there were many!) but the pickings were slim *boo*. Apparently the lovely antiquey and quirky shops are down by the marina/harbour but we didn't know that at the time so didn't head that way.Bah. Instead we called in for a much needed refreshing alcoholic beverage in the old library which is now a Wetherspoons. 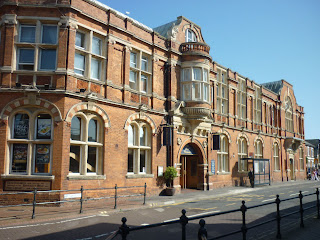 I guess at least it making use of the building right? Do I sound convinced? How about this 'Burger King' below? Not sure if I'm relieved a lovely old building has been saved or horrified at what they have done to it.... 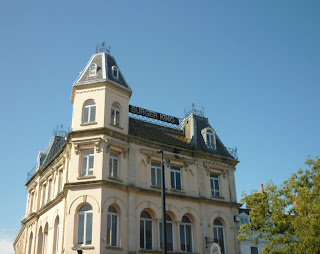 We decided to catch a bus back as we planned to go out that evening. We did venture into town but didn't stay out long, must be getting old or something, but I want to be able to hear myself speak and not have to pay over £10 for two drinks lol.

Saturday we woke up to pouring rain, but thankfully it cleared by the time we headed out and we managed to dodge the couple of other showers throughout the day by diving into shops or pubs!
We decided to walk to Boscombe along the beach. 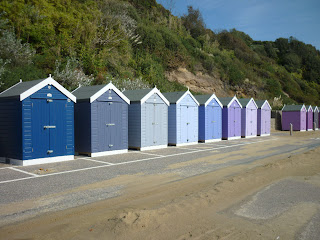 There were quite a few charity shops in Boscombe too but I was amazed to find the prices were WAY more expensive than anywhere else I have ever been. At least 2 or 3 pounds more for every item, and we are talking in national chains here, like Age UK. I don't know if it is because Boscombe has a blossoming reputation for Vintage they felt they could justify it? It's not exactly a wealthy place in terms of it's inhabitants, very strange. It was all pretty uninspiring too.

I was very surprised to find the 'Bournemouth O2 Academy' is actually on Boscombe High Street and *gutted* to see I had missed the chance of seeing Gary Numan again the night before :-(

After my disappointment in the Vintage shops and Himself's in the Sci-fi shop we headed back to Bournemouth to walk through the park and get something to eat. 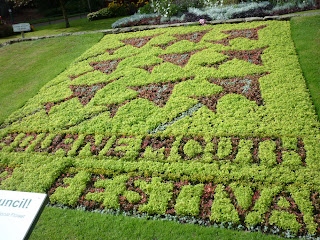 A poigniant floral display in the park for the Bournemouth Air Festival. There was a lovely tribute to Flt Lt Egging and someone had laid flowers on one of the planes. I thought it was a beautiful gesture from both the town council and the townsfolk for an incredibly brave man.

After an out of this world delicious mushroom lasagne for me and pizza for Himself we headed back to the hotel with a bottle of wine because we were both knackered. To digress for a moment last year we stayed in a hotel with not only a hen party but a stag party too. Consequently we were woken up constantly throughout the night by singing, shouting, vomiting and other delightful drunken sounds.This time however we were in a hotel with a coach party of pensioners so we were woken up VERY EARLY in the morning instead, by them roaming round and talking loudly, can't win!

Sunday was time to go home and it poured and poured with rain and there ended my Autumn break.
Posted by Miss Magpie at 15:32